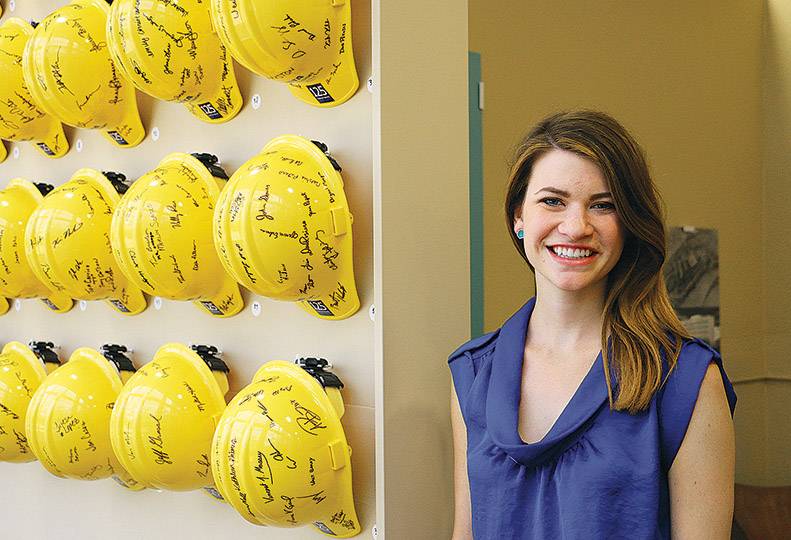 Spokane-based power company Avista Corp. has ramped up its student and post-graduation engineering development programs in the last few years, enabling students and graduates to experience working in different engineering departments within the company before selecting a position.

“It creates an environment where it’s okay to learn,” Hnatishin says. “You don’t have to be an expert, but you’re given meaningful, worthwhile projects.”

Heather Rosentrater, director of engineering and system operations for Avista and Hnatishin’s mentor, says that Avista views the two programs as ways to recruit new engineers and expand current employees’ vision of the company.

“Some of it is engagement, having the employee more engaged by having them understand the broader picture,” Rosentrater says. “It helps them when they do settle into one area; they’re not just looking at their piece, but the larger company as a whole.”

Meanwhile, the student development program aims to familiarize participants with Avista and steer them toward engineering careers with the company, she says.

“By getting them familiar with what we do, bringing them into our community, and giving them experience in our culture, hopefully they’ll be excited and see the utility industry as just as exciting as some of the newer technology areas,” Rosentrater says.

Hnatishin entered the Student Engineering Development Program (SDEP) in the summer of 2010. While in the program, she switched her concentration to electrical engineering, from mechanical, she says.

“The student part is a lot of utility introduction,” Hnatishin says. “There are a lot of different aspects to a utility; you start to learn how power is generated and how it gets to a customer’s home.”

Students in the program also take trips to see how utility facilities function, she says.

“The student program has a coordinator who plans field trips, like to dams, through the summer so you get a look at overall how utility works,” she says.

Hnatishin, graduated from Gonzaga University in December 2012 with a bachelor’s degree in electrical engineering. She says she chose to major in engineering because she likes math and science and it seemed like a good field to find a job in.

“I was the first in my family to go to college,” she says. “My parents are very job-oriented, so we looked at what kinds of jobs could you get from math and science—and came up with engineering.”

Hnatishin was recommended to Avista for the SEDP, she says, by one of her professors at Gonzaga. Now, she says she and other Avista representatives travel to college career fairs and hold sign-ups for the program.

Rosentrater says the student program has grown in the last few years from a more informal internship to a full-blown educational structure.

“It’s exciting for me because I was a student engineer but we didn’t have a structured program back then,” she says. “Now we have a fuller program. We do a lot with tours of our different facilities, substations, and generation sites, so students can see crews at work and see what day-to-day life will be like as an engineer.”

Most students work in the program through the summer, Rosentrater says, with a few choosing to work during the school year. The number of students in the program varies by year, she says, but could be anywhere from three to this year’s crop of 12.

“They do lunches every day, and each of the students is now assigned a mentor; that’s a more recent change,” Rosentrater says. “We have different speakers come in periodically from different departments, so the students can ask questions of those engineers, managers, and directors.”

After graduating from Gonzaga and the SEDP, Hnatishin began working at Avista full time and was accepted into its post-graduation program, the Engineering Development Pro-gram.

In that program, Rosentrater says, engineers rotate between departments at Avista so they can experience different types of engineering jobs and decide which group suits them best.

“That program too has really advanced over the last couple years,” she says. “It’s a good foundation of how the business works before they get into their long-term roles. They’re also assigned a mentor, have lunches set up with different managers and directors, and also do some tours.”

Hnatishin stayed in the program for a year and a half before choosing her final position in April with the generational electric engineering group, which deals with the electric components of dams, she says.

“EDP is a way for engineers to see the different aspects of (working in) utilities,” she says. “It’s pretty much impossible to know right out of college what you want to do in utilities.”

While in the program, Hnatishin worked in groups such as distribution management systems, transmission planning, and protection engineering. The group Hnatishin ultimately chose wasn’t in her rotation, but through the program she gained enough knowledge to guide her decision, she says.

“I gained confidence in my just over a year in the EDP, and I felt I was ready to take on a new job,” she says.

In addition to her time in Avista’s programs, Hnatishin volunteers at educational events for students interested in pursuing science, technology, engineering, and math specialties, she says. As an example, Hnatishin says that local chapters of the Girl Scouts of America have a day where they gather on the Gonzaga University campus and engage in activities designed to interest them in the STEM fields. “What’s important to me (in particular) is to be a female example so girls can see there are female engineers,” Hnatishin says. “I didn’t have a female engineering mentor until my Avista internship. I hope that maybe I could just help one girl to see she could do it too.”

Hnatishin also has done presentations at Spokane Valley Tech and at Washington State University Spokane through a Mathematics, Science, and Engineering Achievement program, which aims to educate minorities and women about the opportunities in those fields.

Looking to the future, Hnatishin has begun taking online courses from Gonzaga University for a master’s degree in transmission distribution engineering, she says.

“I really want to focus on … becoming a great engineer,” she says.

Hnatishin also is pursuing her professional engineer license, she says, which involves passing the fundamentals of engineering exam in college and working under a licensed engineer for four years.

After getting her license, Hnatishin says she may be interested in exploring leadership opportunities, such as through Gonzaga’s master’s degree in organizational leadership.

“After that, I want to start exploring if leadership is something I’d like to do,” she says.

Hnatishin’s final message for engineering students, she says, is not to exclude the possibility of a career in engineering, or other STEM fields, based on stereotypes associated with those kinds of jobs.

“One of my other messages to young people is you don’t have to have torn apart a computer or be into video games,” she says. “You just have to be into problem solving, thinking critically, and being able to work with others and independently.”