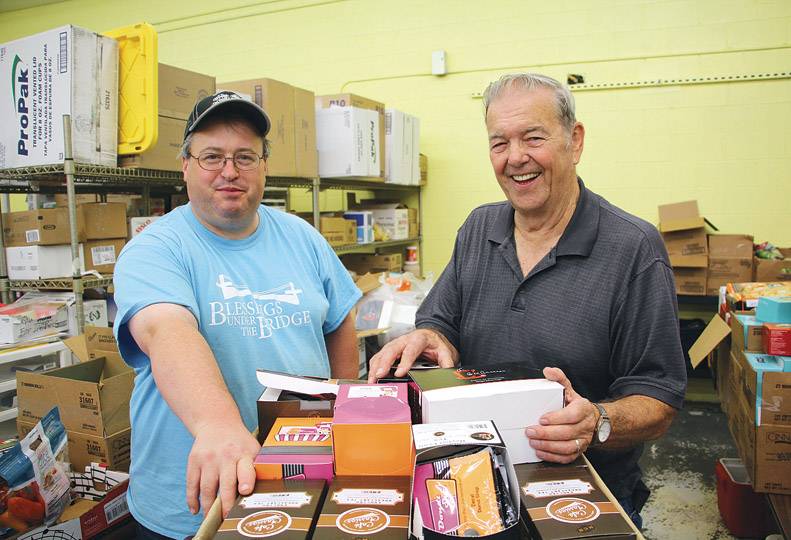 -—LeAnn Bjerken
Blessings Under The Bridge volunteer Loren Berry, left, and Family of Faith Community Church’s Don Brown pick up food at Feed Spokane’s facility to take to those they serve. 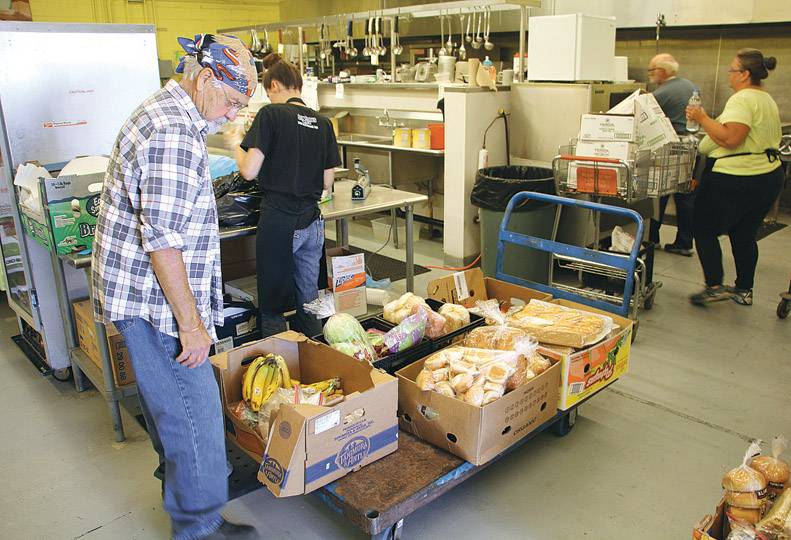 Feed Spokane, a Spokane-based nonprofit that retrieves excess food from restaurants and helps organize its redistribution to needy individuals, says while it has doubled its food donor participation this last year, it could still use more.

The organization’s executive director, Steven Brashears, says the increase in donors to almost 20 is due to a combination of an active executive board and new social media campaigns.

“Our board is very engaged, and we’re constantly working with social media to keep people aware of meal sites, fundraising, and informational events,” he says. “Unfortunately, it’s still hard to convince some places to donate.”

Feed Spokane was founded in 2006 by a group of Spokane-area hospitality industry leaders who wanted to help restaurants to rescue their leftover food, and serve it to hungry families. Currently, the organization’s executive board is made up of 17 people, including Brashears, who has served as executive director for five years.

Although he is the nonprofit’s only employee, he says it gets support from around 15 to 20 volunteers each week. Most are part of meal provider organizations, and about six are drivers who offer to pick up food from donors or deliver it to meal sites.

“I really believe it’s providing a community service that isn’t being met anywhere else,” Brashears says. “I have had so many volunteers tell me, ‘If not for Feed Spokane, there’s no way we could feed the people we do.”’

Brashears estimates the coalition collects more than 100,000 pounds of food each year, indirectly providing food for about 6,000 people per week. He says about 18 food donors participate regularly.

One of Feed Spokane’s regular food donors is Arby’s restaurants. Jerry Pederson is the director of operations for the four Arby’s stores here owned by Dave McGann.

Pederson says the fast food retailer generally can be counted on to donate about 150 pounds worth of goods each week from each location.

“It was a no brainer for us,” says Pederson. “All restaurants have some amount of food that can be rescued, and to be able to give it to an organization that feeds those in need, that’s something we all stand behind.”

He says while the Bill Emerson Good Samaritan Food Donation Act has somewhat relieved businesses reluctance to donate unused food, many still are concerned about exposure and food integrity. Created in 1996, the act encourages food donation to nonprofit organizations by minimizing liability should a donated product later cause harm to the recipient.

“Less than 7 percent of available food that could be rescued actually is, because it’s still difficult for some places to trust in food integrity. They’re just not there yet,” Brashears says. “But as we grow, we ask our members to talk with other businesses so we can help them understand the benefits of donation and build that trust.”

Feed Spokane doesn’t currently have its own location, but instead shares kitchen and storage space with the Greater Spokane Meals on Wheels, at 218 N. Crestline, in East Spokane. Throughout the week, rescued food is brought to that facility, and nonprofit meal providers stop by to collect it.

Brashears says about 25 meal providers make up the Feed Spokane Coalition, including local ministries and community agencies. Among them are organizations such as Blessings Under The Bridge, Cup of Cool Water, Family of Faith Church, Caritas Outreach Ministries, God’s Love International, and Feed Medical Lake.

He says the majority of coalition members regularly receive food collected through the food rescue program and use it to provide free meals for the needy at their own sites throughout the city. Feed Spokane allows two people from each meal provider organization to stop by and pick up whatever food they would like to use.

“We rescue the food, store it, and most organizations come pick it up on Mondays,” he says. “Occasionally, depending on the size of the organization and volunteer availability, we can arrange to have food delivered to a site, but that’s rare.”

Brashears says the organization’s other great challenges are finding more sources of protein or meat donations, and attracting dedicated volunteers.

“The few expenses we incur are usually when we are lacking in meat or protein donations and have to purchase those. Protein sources are definitely harder to come by,” he says.

Of volunteer recruitment, he says events such as its annual Friend Raiser breakfast and volunteer fairs are excellent opportunities for potential donors and volunteers to eat and hear more about how the organization works.

“We also try to help spread awareness through partnerships with the Washington Restaurant Association and Greater Spokane Dietetic Association,” he says.  “Right now we’re also working through a grant from the Inland Northwest Community Foundation to hire a part-time, volunteer coordinator who can help us organize drivers and pickups.”

Brashears says for its annual Dine Out to Feed Spokane event in March, the organization partners with Greater Spokane Dietetic Association to encourage the community to eat at participating restaurants and purchase services at certain vendors, who then donate a portion each meal’s proceeds to fund Feed Spokane.

Next month the organization also will host its third annual fundraiser through tickets sales to a production of “Beauty and the Beast”, at the Spokane Civic Theater.

“I enjoy this work a lot more than my previous career,” he says. “I think it’s because you really need to have a service-before-self attitude. The volunteers we work with are genuinely good, generous people.”

Larry Gants, a regular volunteer with both Feed Spokane and Meals on Wheels offers a slightly different, but similar perspective, saying, “It’s really all just about paying it forward.”