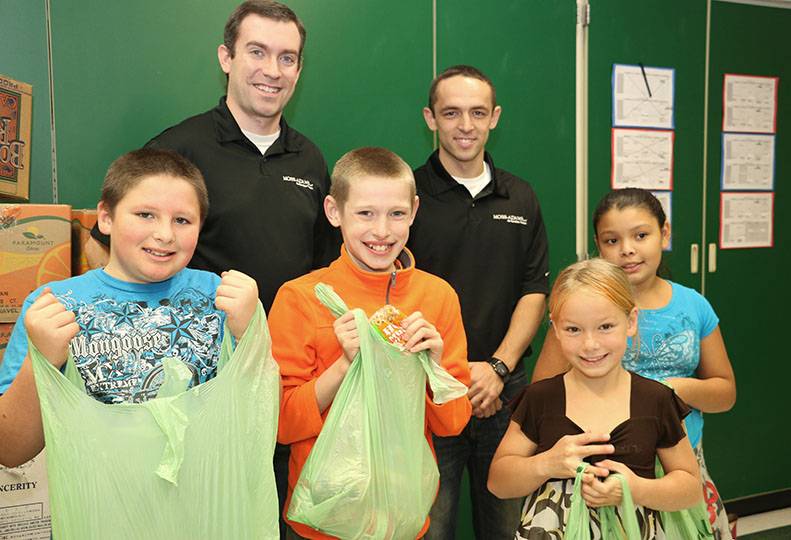 Every Thursday, a volunteer from the Spokane office of Seattle-based accounting firm Moss Adams LLP delivers a car full of food to Cooper Elementary School in Hillyard, providing enough food packages to go in the backpacks of 60 students who have been identified by school staff as needing food for the weekend.

In Spokane, it’s estimated that one out of every four kids is unsure where his or her next meal is coming from says Tom Stevenson, program coordinator for Spokane-based nonprofit At the Core. In Spokane County, a total of 24,280 children, or more than 22 percent of all youth, are “food insecure,” he says, a term developed by the U.S. Department of Agriculture to describe households financially stretched to the point where they can’t be certain that all household members won’t go hungry.

Stevenson says it’s disturbing to realize that more than 27 percent of kids live at the poverty level or below.

In 2013, 45.4 million Americans were living below the official federal poverty line, which was $11,490 for an individual, and $23,550 for a family of four, according to the U.S. Census Bureau. In Washington state, more than 217,000 children, or 14.3 percent of those under 18 statewide, were living in families below the poverty level, says Washington Kids Count, a joint effort of the Children’s Alliance and the Washington State Budget and Policy Center.

In response to the numbers, At the Core developed a program called A Bite 2 Go, which has been providing weekend meals to kids since 2011. Every week, nearly 1,300 children in 29 elementary schools in the Spokane area who don’t have enough food at home receive help in the form of a weekend food kit, says Stevenson.

At the Core, together with Second Harvest Food Bank of the Inland Northwest, partners with Spokane-area businesses, churches, organizations, and schools, which adopt a particular school for a three-year period, and agree to fund that school over the school year.  Once an organization has adopted a school, he says representatives of the At The Core consortium introduce participants to school leaders, and they develop a strategy to coordinate volunteers and fund the packages.

The food packs include a mix of easy-to-open, single-serving, nutritious, nonperishable food items to cover four meals and three snacks over the weekend during the school year, Stevenson says. Volunteers from businesses and other organizations participating in the program can become as involved as much or as little as they choose, such as by packing the food at Second Harvest on a regular basis, or delivering the packages every week to the school coordinator. Then every Friday, staff members at participating schools put the packages of food discreetly in the backpacks of students in need.

Anna Bresnahan, Spokane mar-keting manager at Moss Adams, says the Bite 2 Go program was a no-brainer when she and other employees heard that one in every four kids in Spokane live below the federal poverty level.

“We didn’t know about the program, but we were blown away by those stats,” Bresnahan says.

Bite 2 Go was introduced to Moss Adams employees in November 2013 and by January, the company had adopted Cooper Elementary, located at 3200 N. Ferrall, and was geared up to provide both funding and volunteers to the cause.

More than 50 percent of Moss Adams’ 80 employees in Spokane signed up to participate.

“We asked if employees would feed a child for a year for $12 a month or $144 for the entire school year,” she says.

“So far, we’ve donated more than $17,000 to the program through employee donations and our office match of $3 for every dollar donated,” she says.

Stevenson says the mission of At the Core is finding people and organizations who want a chance to do something for others. If people are just writing checks to a charity, they get bored, he says.

“At the Core recruits businesses and churches to adopt elementary schools, feed the identified children who are hungry on the weekends, and then encourages the business or church to do more. Businesses don’t necessarily know how to get involved,” he says.

“The goal is not only to provide weekend food kits but also build long-term relationships between community members.”

Over the course of the year, Stevenson says volunteers from participating businesses have become involved in what’s happening at the schools, and are mentoring kids, reading to students, and assisting in the classroom.

Moss Adams employees volunteered for Cooper Elementary’s fund run last spring, which meant helping or running with students around a track to raise money for educational activities and field trips.

“It also allowed us to get to know some of the kids and reach out to staff,” Bresnahan says.

The company also organized a hat-glove-sock drive in January, after learning the kids sometimes didn’t have warm enough clothes. This year, the company established a $1,000 annual scholarship program for graduates of Cooper who have gone on to graduate from high school and need funds for college.

Bresnahan says employees who are getting to know students at the school have also agreed to mentor some of the kids, although the commitment to do so is not always easy for many employees who travel up to 40 percent of the time for work. “We have just started doing it this fall and it’s a time commitment of one hour, once a week,” she says.

She says the motivation is simple.

“We want to help kids in this community who are hungry,” she says.

Bresnahan says she hopes more companies will join Moss Adams in helping At the Core provide food for families.

“We hope more companies will want to join in,” she says. “It’s been so easy to contribute and it’s fairly easy to implement the program.”

At the Core’s Stevenson says the organization and the community still have work to do.

“Our goal is to get every one of the over 90 schools and the estimated 4,000 children who are hungry each week in Spokane and the Spokane Valley successfully adopted by September 2016,” he says.