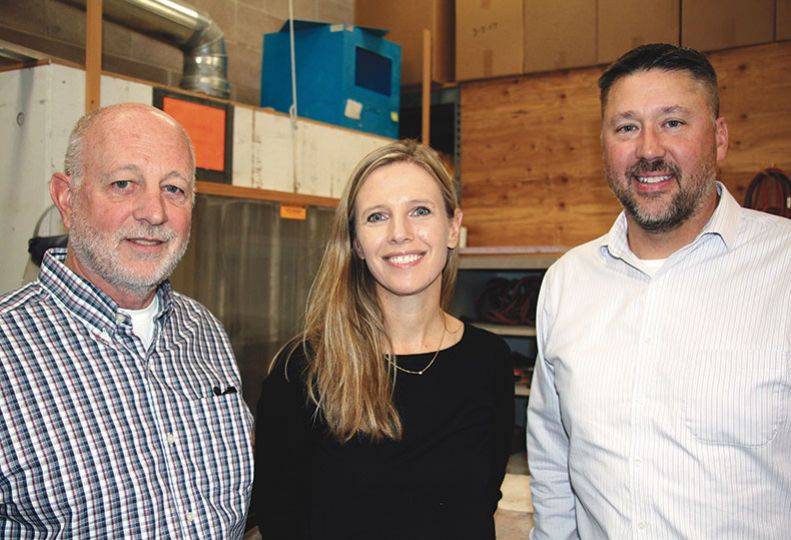 -—Samantha Peone
From left, Bruce Williams, Teresa Dugger, and Dustin Wasley are part of GeoEngineers’ leadership team in its Spokane office, which is located at 523 E. Second, east of downtown Spokane.

Following the retirement of the Spokane office's founder James Harakas in 2015, engineering concern GeoEngineers Inc. has transitioned to a group leadership approach while still being involved in several prominent projects in the Spokane area.

Now, that oversight is handled by multiple people depending on what services and engineering specialties are needed for each project, says Smith.

“We transitioned to empowering a bunch of different leaders within the office instead of having one person that would be the go-to to make decisions,”says Smith. “It became more of a group leadership style.”

Redmond, Wash.-based GeoEngineers has 25 employees based in its 8,100-square-foot Spokane office, at 523 E. Second, says Smith. The company has 330 employees across all 13 offices. Depending on the project, GeoEngineers will work with employees from other offices as well.

Other than the west business unit, GeoEngineers has four offices in the Seattle area and three others in the U.S.

Bruce Williams, principal environmental scientist at the Spokane office, estimates 2018 revenue companywide will be between $50 million and $52 million, roughly 5 percent more than 2017's revenue. 2019's revenue is projected to increase as well.

“It was planned out and, I think, very successful,” says Wasley, who joined GeoEngineers three years ago.

Before retiring, Harakas often took the new leaders of the company, such as associate geotechnical engineer Teresa Dugger, to project meetings.

Dugger, who manages the west business unit's geotechnical group, says attending those project meetings enabled the new heads to become more acquainted with other current and upcoming leaders within both engineering and other related industries here.

Dugger says GeoEngineers also contracted with Harakas during his first year of retirement in case the company needed guidance on specific projects he oversaw before leaving.

While Harakas was comfortable working long hours, Dugger says, most current leaders in the Spokane office come from two-income households or have children, so there's more of an effort to share the workload.

“I think there's a lot more (life-work) balance going on,” she says.

During its leadership changes, GeoEngineers also has maintained a presence in some of the Spokane's most prominent projects, such as the new Amazon Fulfillment Center on the West Plains.

The company's involvement in that project, says Dugger, includes engineering and construction oversight. The company ensured earthwork was handled according to its recommendations and has been monitoring concrete placement for the owner.

Williams says the Riverfront Park development is another project GeoEngineers has been working on for four years. The company has worked with the city to assist with earthwork-related challenges associated with the project.

Because GeoEngineers typically works in the early stages of a project, Williams claims the company's workload can be indicative of how the local economy fares in future years.

“If we're busy, then that typically means anywhere from months to a couple of years after that, there's construction on the ground and more jobs that follow,” he says.

That proved true with the Great Recession, he says. Both company-wide and locally, GeoEngineers' work slowed down before others were hit. It also picked up work faster than others after the economy had strengthened.

Now, GeoEngineers, here and elsewhere, is still busy with projects,
he says.