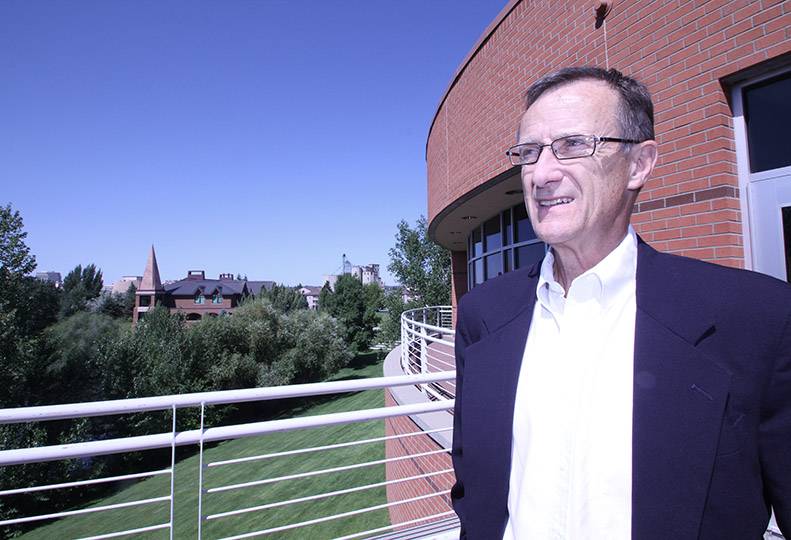 Clarence "Bud" Barnes, soon to retire as longtime dean of Gonzaga University's School of Business Administration, has watched the school's undergraduate enrollment grow from 450 students in 1980 to nearly 1,200 people this year in studies ranging from accounting to entrepreneurship.

The business school also drew about 250 graduate students this year in programs that include its MBA and master of accountancy, which U.S. News & World Report recently ranked 14th nationally for specialty accounting education. The publication ranked Gonzaga's MBA program at No. 73 in the U.S.

Since 1987, the school has met business education accreditation standards, which Barnes says only about 550 business schools among some 2,000 nationally achieve. The school also raised funds to build its Jepson Center in 1987, and then doubled the center's size to 64,000 square feet in 2006.

With such milestones reached and after 33 years at the school's helm, Barnes says he's retiring as dean at the end of this year to focus on teaching part time at Gonzaga for another few years, while doing research and fundraising there.

"I'm really looking forward to just teaching, which is how I started my career and it's a great way to end my career," says Barnes, 72.

That career began 40 years ago when Barnes joined Gonzaga as an economics professor. Barnes says he will continue to teach a two-year elective class called portfolio management for students to learn how to select stock investments.

Gonzaga says it will appoint an interim dean, and that it plans to do a national search to replace Barnes.

After four decades, Barnes has a vast knowledge base to pass along. He remains a keen observer of global economic conditions, knowledge he likely will continue sharing with his students.

Barnes received a doctorate degree in economics at the University of Tennessee, Knoxville in 1973. At Gonzaga, he's taught the portfolio management class for the past 10 years, as well as a few economics and finance classes over the years.

In describing the current U.S. economy, Barnes says he considers it "somewhat remarkable," when considering economic conditions at the recession's start. He also says the long, slow climb from this recession was particularly grueling because the nation teetered so closely on the brink of economic collapse.

"Our banking system and housing industry were failing; our auto industry was failing," Barnes says. "All of that had a ripple effect that resulted in dramatic increases in unemployment. Now, fast-forward to today. The auto industry is vibrant. The banking industry, although it's been through consolidation, is significantly healthier. Housing is once again on the rebound."

He adds, "Stubborn unemployment has gradually begun to shrink."

"It's been the brightness of teams of people, primarily at the Federal Reserve," he says.

"The economy is gaining strength and appears to be on the road to solid recovery," Barnes adds. "It's understandable that folks are impatient. This is a big, big ship to turn. The U.S. is the biggest economy in the world, and it falls flat on its face. It's taken five solid years, but I think it's finally pointed in the right direction."

He adds that the slow U.S. economic recovery also has occurred in the face of a world economy that remains weakened, and works against strengthening this nation's economy. He says he foresees a return of U.S. manufacturing as some companies weigh rising costs for shipping and insurance for overseas production against cheaper foreign labor costs.

Barnes says he's also impressed with Spokane's resiliency during the recession, adding, "We've been able to maintain a strong economic base in spite of a severe U.S. economic crisis."

Barnes serves on a number of boards, including on the board of the Spokane-based Thomas Hammer Coffee Roasting Co. He also leads the Dean's Business Forum, with board members who include alumni and business leaders. The forum brings in speakers and assists in raising money toward student scholarships and faculty fellowships.

Additionally, he remains in contact with numerous business school alumni around the nation.

Barnes is quick to note the accomplishments of graduates who include executives at such companies as Boeing Co. and Microsoft Corp., as well as investment advisers, entrepreneurs who started businesses, and accountants at large accounting firms.

Ken Anderson, a professor of management who has taught at the school for 27 years, credits Barnes with building up a business school here that is relevant to students today, amid constant economic, political, and legal changes affecting businesses.

"We're a much larger institution than we were when Bud first started as dean, and the business school has grown in similar fashion," Anderson says. "We're probably twice as large in terms of faculty and staff, number of programs and students. He's guided us through that to be successful."

Anderson adds that estimating the dean's overall impact is difficult.

"He's the one who spearheaded our accreditation approval," Anderson says. "He secured the funding for our building, the Jepson Center, and maybe most remarkable especially relative to business schools today is he hired every single person in the building."

The school employs 46 people in faculty positions, 13 people who work in support roles, and 14 part-time instructors.

Barnes says much has changed in business education since 1973, primarily the impacts from information technology and how rapidly students can gain information. He says that studies in information systems, emerging as a subject in the 1980s, and entrepreneurship studies starting around the mid-1990s both have grown substantially at Gonzaga in recent years.

"Our entrepreneurship courses have students involved in ideas to start their own business, new inventions, and technology," Barnes says. Innovative new products and services can lead to the eventual development of major U.S. corporations, such as Apple Inc., he adds.

Meanwhile, information systems increasingly are integral for internal business management and payroll, company financial tracking, as well as delivery systems for products and services, he says. As an example, he says a student focusing on information systems management could be hired by a corporation to work on making a system more efficient, such as for tracking customer purchases.

The school also added the master of accountancy program about 20 years ago, Barnes says. Those students often become CPAs, and the accountancy graduate program claims a 90 percent job placement rate within three to six months of graduation, the school's website says.

Overall, Barnes says, the bulk of the school's students have focused in more recent years in one of three subject areas—accounting, finance, or marketing.

He says the school receives an accreditation review every five years through The Association to Advance Collegiate Schools of Business, which is a nonprofit membership organization of educational institutions, businesses, and other entities.

An AACSB team visits a school for several days and measures the quality of faculty and students, the school's educational resources, curriculum, and how well students demonstrate what they've learned.

During his 40 years, Barnes says he's seen a dramatic increase in the quality of the school's students and professors. He plans to continue serving as an AACSB peer-review examiner, a role held by business school administrators from accredited sites to fill teams conducting review visits.

Another role he plans to continue is doing research. Barnes mainly has studied the field of economics measurement and valuation. As examples, he says a business may face a contract dispute over the value of its assets, or questions may arise about a business owner's wealth.

"I look at how you measure the value based on criteria," he adds. He has published a couple of studies on the subject and has done some consulting work on the issue, he says.

However, he says teaching students will be a primary focus in the next few years.

"I've had 33 years of very productive experiences as a dean, and kept up relationships with students that have carried on for 30 years," he says. "That's a residual benefit that's better than income."