Growing number of leadership groups help women support one another

Several women’s leadership and business networking groups have sprung up in the Spokane area as more women seek positions of influence within their businesses or as they establish new businesses. Those involved in suc 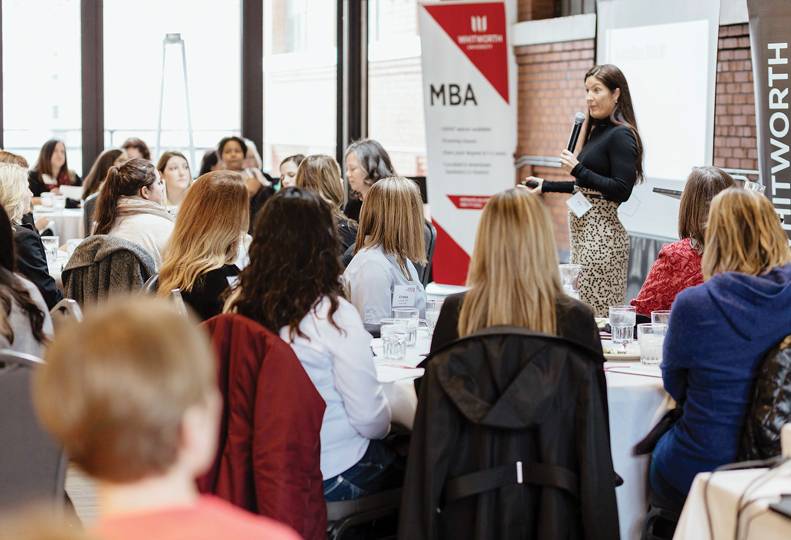 Several women’s leadership and business networking groups have sprung up in the Spokane area as more women seek positions of influence within their businesses or as they establish new businesses.

Those involved in such groups say members benefit from networks that provide support to all women and seek to find solutions to the issues faced by women in business and leadership.

Tara Wear, owner and president of corporate communication coaching business Powerful Connections Now LLC, is a member of the Spokane chapters of the National Association of Women Business Owners and the Lean In Circle.

“When women come together in a healthy, supportive way, we can really lift each other up,” Wear says. “We all face the same challenges. It’s about being stronger together and supporting each other and each other’s businesses.”

The local chapter of the National Association of Women Business Owners meets the second Thursday of each month, often in the event space at Nectar Catering and Events, at 120 N. Stevens. Wear says the group has about 50 members and is on Facebook as NAWBO-NW.

The Spokane Lean In Circle is a chapter of a national network that was inspired by the book of the same name by author Sheryl Sandberg. Wear says that group meets twice a month; a morning meeting is held the first Wednesday of the month at Pyrotek, at 705 W. First, while an evening meeting is held the second Wednesday of the month at McAloon Law PLLC, located at 421 W Riverside, Ste. 515.

“It’s a really comfortable, somewhat intimate circle where it’s just casual and conversational,” Wear says. “We’re just a bunch of women that bring the different challenges that we experience to the table. We have brainstorming sessions to help each other come up with solutions.”

The Spokane Lean In Circle has about 40 members, Wear says. She adds that reading Sandberg’s book is not a requirement for joining the group.

One of the issues both groups confront, Wear says, is the perception of women as either too bold or too meek.

“What we talk about is particularly the double bind the women are in: Be assertive, but don’t be seen as the B-word,” Wear says. “We either speak up and we’re seen as negative, or we don’t say anything and we’re seen as weak or quiet.”

Hailey Landrus, president of the Spokane chapter of Executive Women International and principal at Stamper Rubens PS, says that group often discusses the struggle women face as they try to “have it all.”

“The work-life balance is always a struggle,” Landrus says. “It’s helpful to identify ways to feel like, as a woman, you’re not always failing in one or both departments. That’s what I have come to find is really the biggest issue, more than all the hot-button topics and issues that are out there.”

Executive Women International focuses on the personal and professional growth of women, but Landrus says the organization includes male representatives. About 65 different organizations are represented in the Spokane chapter, Landrus says.

“We try to connect by networking with each other in a way that is like a noncompete” Landrus says. “We try to limit the types of members that come in so that they kind of get the corner of the market in this particular organization. But a member firm can send as many representatives as they want to.”

Landrus says she’s noticed an increase in leadership conferences geared toward women in the Spokane area.

“It just seems like everywhere you turn, there are more and more opportunities to engage with other women in the Spokane and Kootenai County areas to discuss women in leadership,” Landrus says. “I feel like there are more and more women who are taking the risk to develop themselves professionally and pursue higher offices in different organizations and in employment.”

The Spokane chapter has been operating for 40 years, Landrus says. The group meets the evening of the third Tuesday of each month. Each meeting takes place at a different location; the June meeting will be held at the Kalispel Golf & Country Club.

Whitworth University is in the midst of creating a new women’s networking group that its founders say will grow beyond the boundaries of Washington state.

Stacey Smith, Whitworth’s Associate Vice President of Institutional Advancement, says the Whitworth Women’s Leadership Network is intended to be a resource for current and former students.

“We want to provide programming, networking, and education for a broad array of leadership activities,” Smith says.

The Whitworth Women’s Leadership Network “did a soft launch” earlier this year by hosting a Leadership 360 luncheon series, which sold out for each of its four lectures. A more formal launch event will be held June 27 in Seattle.

“We have a leadership team formed in Seattle, and we will have our first leadership planning task force in Spokane this month as well,” Smith says. “We don’t want this to be just a Seattle and Spokane thing. We’re going to be meeting with a group of women in southern California that we hope to pull in. We want to be able to offer realistic opportunities in the Bay Area, Los Angeles, Boise, Portland, Colorado. Those are other big markets for Whitworth alumni.”

Smith says the group focuses on leadership, mentorship, and philanthropy. A mentorship program for the group was recently launched for members to connect with Whitworth students. Smith says Whitworth Women’s Leadership Network also is establishing a philanthropy fund.

“This will be a fund whereby we will be collecting the funds from now until December and then soliciting grant requests on campus, which will be submitted to the grants committee,” Smith says. “Anybody who makes a donation to the women’s philanthropy fund will get the opportunity to weigh in on how the money is spent, which grants are being awarded.”

Smith says the group is still signing up members but estimates there are about 30 members in Seattle and about 35 members in Spokane.

“We haven’t had anything like this at Whitworth,” Smith says.

Smith says alumnae frequently had asked her whether Whitworth offered leadership opportunities. Last year, she teamed up with Danika Hatcher, Whitworth’s assistant director of development, alumni and parent relations, and the two began looking for women who would lead the group.

Hatcher also runs the student arm of the group, called the Student Women’s Leadership Executive Board. Eight students, two from each cohort, are tasked with providing programming on Whitworth’s campus that mirrors the programming of the alumnae group.

“Our hope is that our members will engage the female students who are in the student group, who will graduate and immediately become members of the alumnae network,” Smith says.

The group is scheduling some after-hours events in the Seattle area that will focus on topics such as negotiating raises, Smith says, and the group envisions creating industry-focused events in the future.

The general support and camaraderie of the group, Smith says, is likely to be one of the elements members value most.

Wear says groups like NAWBO, Lean In, Executive Women International, Whitworth Women’s Leadership Network, and others are vital to producing a sea change in society.