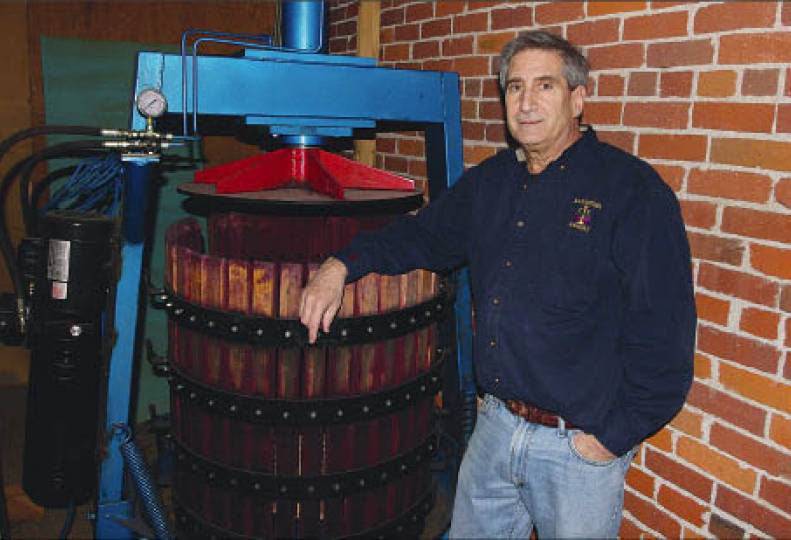 Some winemakers in the growing wine industry here say they've fared well through the recession and would even welcome more competition.

Arbor Crest operates a year-round wine-tasting room at River Park Square downtown and another wine-tasting center at the winery located at 4705 N. Fruit Hill Road, about 10 miles east of downtown.

"Outlying wineries like Arbor Crest, with their grounds and gardens, provide a little different experience, and we've expanded our retail and day-concert activities," he says.

"We decided then to focus on quality and not quantity," van Loben Sels says.

Restaurant sales have been off during the recession, but a lot of people are enjoying wine at home, he says.

Latah Creek Wine Cellars also has experienced a decline in restaurant and wine-tasting room sales during the recession, but has enjoyed an increase in grocery-store sales, says Mike Conway, who with his wife, Ellena, owns the winery, at 13030 E. Indiana.

Latah Creek produces 15,000 to 17,000 cases of wine a year, and annual sales are steady at about $1.3 million, Conway says. He says the winery has been the Conways' sole source of family income. Latah Creek has three other employees.

"We've done pretty well" during the recession, Conway says. "We discovered in past recessions that people are not going to give up wine drinking, but they'll give up drinking $50 wine."

Sales have held strong for wines priced at up to $20, he says, adding, "Most of what we make falls under the $20 category."

That's consistent with a recent market report by Spokane-based Northwest Farm Credit Services. "Wine brands that were new, priced over $20 to $25 a bottle, or that were dependent on restaurant sales struggled the most in 2009 as consumers chased value with more limited resources," the report said. It added that U.S. wine consumption increased by 1.9 percent in 2009, compared with 2008, but the total dollars Americans spent on wine declined by 3.3 percent.

Greg Lipsker, a Spokane attorney who owns Barrister Winery with Michael White, another attorney, says that the winery, located downtown at 1213 W. Railroad, has enjoyed an increase in tasting-room visits that has more than offset a decline in wine sales at restaurants during the recession.

Barrister conducts half of its sales at the winery and through its mailing list, Lipsker says. It produces about 3,500 cases of wine, and it plans to increase production to 4,200 to 4,500 cases next year.

All but 200 cases of its production this year are red wines.

"We're best known for our cabernet franc," Lipsker says. Barrister's initial release totaled 145 cases of cabernet franc in 2003, he says, adding that revenues have grown every year, and the winery is profitable.

"We haven't had to feed the winery for a number of years," he says. "We sell out of everything. We have a loyal following in Spokane and across the state."

Lipsker expects sales to remain strong because most of Barrister's wines are priced at around $20.

"People don't need to spend $40 to $50 in order to have wine that's not only enjoyable, but outstanding," he says.

He also welcomes fresh competition. "Competition increases awareness of Washington wines that can compete on the world stage," Lipsker says.

There's always room for people to make quality wine, but it is becoming harder for new wineries to earn brand recognition, he says, adding, "We consider ourselves a new winery, but we're older than 70 percent of the wineries in the state."

Robert Karl, another downtown winery, at 115 W. Pacific, produces about 2,500 cases a year.

"We don't produce a lot, but we sell all we produce," says Rebecca Gunselman, who owns the eight-year-old winery with her husband, Joe. "We focus on the Washington state market, specifically our hometown."

All but about 180 cases of its production are red wines. "Cabernet is our flagship wine," Gunselman says.

While wine sales by the bottle are down at restaurants, Gunselman says there's been an upward trend in glass pours. "People are tasting two or three wines rather than buying a bottle of one wine," she says.

Robert Karl's sales have remained strong at the winery and in wine stores, largely due to the winery's price points, she says. About 60 percent of its wines sell at about $20 a bottle, and the rest mostly are priced at under $30, although the winery produces 100 cases of its upper-tier wine, which is priced at $45 a bottle.

Robert Karl own 8 acres of vineyards in the Horse Heaven Hills area of the Columbia Valley, and all of its grapes come from four vineyards there.

Gunselman says there are no immediate growth plans for the winery.

Because the winery's price points and production volume haven't changed in the last few years, there's been no change in its revenues, and the Gunselmans haven't recovered all of their investment in the winery yet, she says.

They are in business for the long run, however, and hope eventually to leave a profitable venture in the hands of their sons, Gunselman says.

How fast wineries should grow can be an issue. For example, van Loben Sels says that while Arbor Crest has the capacity to grow faster, it will focus on slow, staged growth of 2 percent to 5 percent a year. Even though he describes Arbor Crest as amidsized winery, it's among the top 25 producers in the state, which now has 650 wineries, up from 240 less than 10 years ago, he says.

Despite what would appear to be increased competition, the last three years have been Arbor Crest's strongest in terms of revenues, van Loben Sels says. Arbor Crest sells its products in 32 states, with an emphasis on the Pacific Northwest and Washington state.

Arbor Crest makes about 18 wines a year, and prices most of them at $10 to $25 a bottle, van Loben Sels says. It prices some of its reserve wines, however, at $35 or more a bottle.

"We try to single out three to five wines a year that stand out," he says.

Arbor Crest sells its upper-tier wines at its wine room, online, or at wine shops, but not at grocery stores, van Loben Sels says. One of those is Dionysus, a Bordeaux-style blend that has become Arbor Crest's signature red.

For most of its history, Arbor Crest has produced mostly white wines, but it has slowly shifted its production to about 60 percent red wine.

"We wanted to focus on good reds," he says. "It took a while to shift our consumers with us."

Keeping a place on the grocery store shelf is always a challenge, but Arbor Crest has an advantage here because it's well-established, he says.

The winery is always working on its marketing, though.

"We're looking at our third revision of labels," van Loben Sels says. "We want to make sure we stand out against the others."

Arbor Crest owns a small estate vineyard, which produces grapes used to make sparkling wines and, last year, a pinot noir. Most of its grapes, though, come from Columbia Valley vineyards near Mattawa, Othello, and Pasco, in the central part of Washington state.

Latah Creek will produce a total of 15 wines this year, Conway says. The winery always has produced more white wines than reds, although it has increased its ratio of whites to reds in the last five or six years.

"We're changing the mix a bit, adding the Monarch series of four upper-tier red wines," Conway says. They will be produced in lots of 100 to 150 cases and will sell in the range of $25 a bottle.

While Conway says competition among makers of quality wines here is good for the industry, it's becoming more of a challenge for new wineries to enter markets.

"It would be difficult to start up a winery today and achieve what we achieved 28 years ago," he says. "Grocery stores base their shelf space on sales, and it's hard for a new winery to break into that."

Latah Creek sells most of its wine in Washington and most of that in Eastern Washington—a change from when it started out in 1982.

"Twenty-eight years ago, we were selling in 28 states," he says. "It's difficult to maintain out-of-state markets."