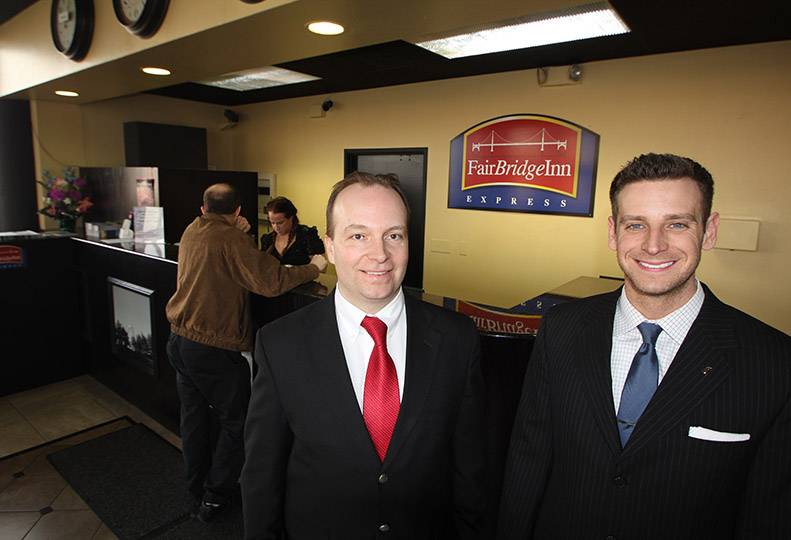 Spokane plays host to the corporate headquarters of three hospitality companies that all say they are in a growth mode, even if their business models are slightly different.

Red Lion Hotels Corp., Magnuson Hotels, and FairBridge Hotels International each are projecting increases in the number of hotels they will add to their networks this year, and all of their plans call for expansion that doesn't involve acquiring, developing, or owning any additional hotels themselves. Rather, they're signing contracts with independent hotel owners under franchising or licensing agreements.

FairBridge, founded in 2009, says it's adding three hotels to its network this month, including a 50-room former Comfort Inn located in Roseburg, Ore., and expects steady growth. Last year, it signed on nine hotel properties and now has a total of 20 affiliated hotels in 10 states and one in Canada.

Magnuson Hotels, which launched 10 years ago, has licensing agreements with nearly 100 hotels—one in Canada and the rest in the U.S.—that are Magnuson-branded hotels. Those hoteliers formerly aligned with such chains as Comfort Inn, Best Western, and Holiday Inn. CEO Tom Magnuson says the company expects to convert 300 to 350 additional hotels to its brand in North America by the end of 2013. The company also says it offers services such as reservation management to a global-affiliated network of nearly 2,000 hotels.

Red Lion, a publicly traded company, said last year it expects hotel franchising to become a primary vehicle for expansion, as it reinvests money into its 28 owned hotels. The longtime chain since has converted some buyers of its properties into franchisees, and it added new franchisees to a network of nearly 50 hotels, of which 20 are franchisees, in nine states and one Canadian province.

"We would like to see 30 franchises in our system by the end of the year," says Harry Sladich, executive vice president of sales, marketing, and distribution for Red Lion. "Red Lion sees it can grow quickly by associating itself with owned properties that are successful with their properties, and they let us do what we do well, which is sales and marketing."

Sladich adds, "The economy is coming back, and business owners are becoming optimistic again. They want help filling their hotels."

The American Hotel & Lodging Association estimates that the U.S. has 51,000 hotel properties. PricewaterhouseCoopers, a multinational accounting firm, in a recent report projected a slightly stronger 1.8 percent increase in demand for U.S. hotel reservations this year.

Magnuson and FairBridge are both privately held companies that say they offer hotel owners licensing or membership agreements to provide various services such as branding, marketing, and reservation support, as an option in the marketplace to being a part of big hotel chains.

Tom Magnuson, who oversees headquarters in Spokane and London, contends that hotel owners hurt by five years of global economic turmoil are weighed down by the costs assessed by some bigger national hotel chains, including fees based on total room revenue.

"The franchise model is on the downside of the product life cycle," Magnuson contends. "With how people shop for rooms now, they don't really shop through the franchises. Consumers aren't really brand conscious any more. They look for location, amenities, quality rankings, and good price."

He says true brand power does hold firm, however, at higher-end hotels, such as the Four Seasons or Ritz-Carlton.

Below the luxury market, however, Magnuson says, "It's probably opening up a lot of opportunities for Red Lion, FairBridge, us, and a lot of companies, to replace the big franchise chains."

Both FairBridge and Magnuson offer three tiers of brand names to reach different segments of the hotel market, from the economy properties that offer few extras to more upscale hotels with a number of amenities, including a complimentary breakfast. Magnuson has its Grand Hotels for upscale properties, Magnuson Hotels for mid-priced to upscale, and the M Star brand for economy hotels.

Magnuson says the company charges hotel owners a licensing application fee of $5,000 to become a Magnuson brand, and then charges 15 percent of the room reservations that come through Magnuson's reservation system.

Red Lion, as is typical in franchising relationships, signs agreements with hotel owners as the franchisor receiving an up-front fee and ongoing royalties for providing its brand, expertise, and access to internal operations and systems, which includes its reservation system.

Sladich declines to disclose Red Lion's fee structure for affiliated hotels. However, regarding whether typical hotel franchise costs in the industry run close to 15 to 20 percent of room revenue, he says, "I think that's the high range."

Meanwhile, he says that as the hotel industry gains traction, the franchise model remains a strong option for hotel owners who want the benefits of major brand recognition and national marketing.

"The traditional franchise model is alive and well, and very strong," Sladich says. "I'd counter saying things are changing in the industry. What you have is hotel owners in different cycles of what they need, and they choose what works best for them."

As counter to what he calls a la carte distribution of services, he says Red Lion offers a broad-based system that includes a recognized brand, online display of a property, search engine marketing, ad campaigns, a call center, and exposure through national sales and representation at trade shows.

"You have people who own hotels who say, 'I need that help, and a brand,'" he says. "Red Lion has been around for decades as recognizable brand, and we have campaigns associated with that. Some hotel owners say, 'We don't want to pay the fees,' and say they don't think they need the brand, and those are the folks who are finding Magnuson and FairBridge."

He adds, "Others are saying, 'I want that brand identity because the clients know that brand, and millions of dollars in marketing is being spent to attract people to go there."

Because Red Lion owns hotels, for any standards the chain requires, he says, "We'd have to make the same investment in our hotels." He adds that the hotel franchise model is similar to that of restaurants, with owners following brand standards so the property is recognized as part of a chain.

"The customer walks in and says, 'These are the familiar touch points I recognize, and I want to come here.' I think the consumer is looking for familiarity," he says. "Traditional brands give you a little more guarantee that you'll get the same experiences."

Co-owner Frederick Schoener says FairBridge charges an initial licensing fee that ranges from $5,000 to $20,000, depending on the three brands it offers: FairBridge for upper midscale hotels, Dumont for economy hotels, and Loyalty for roadside "mom-and-pop" operations.

"We started as a management company helping distressed hotels turn things around," Schoener says. "What we found is the problem for most of these hotels is the franchising arrangement caused a huge drain in costs paid to a franchise, and to invest in a property, while not really getting the results."

Skyler Reep, FairBridge's public relations director, says some owners feel they work for their brand. "Sometimes, a brand's expectation of the owner is so expensive they take precedence over the owner's job of serving their guests," he says.

Reep says that includes owners being required to pay for high-cost, brand-driven property and amenity upgrades. "Big brands will every few years establish a property improvement plan that will cost a hotel owner literally hundreds of thousands of dollars."

FairBridge's majority owners are Schoener, Sumeet Kals, Suminder Kohli, and Jamal Mashburn. Schoener says the company's growth is expected to be slow and steady this year.

Schoener adds, "We're a membership-based brand partner, not a franchise. Most franchises charge about 8 1/2 to 15 percent off of the room revenue per month."

Schoener says hotel owners also incur costs paid to online travel sites such as Expedia.com. "If you paid $100 for a room, typically about 20 to 30 percent goes over to Expedia right off the top," he says.

As an example, he says for a $100 hotel room rate, if 20 percent goes to Expedia, 10 percent to a franchisor, and 5 percent toward a brand loyalty program, an owner's income per room gets cut significantly. "For what looks like a good rate at $100, the hotel is receiving $65."