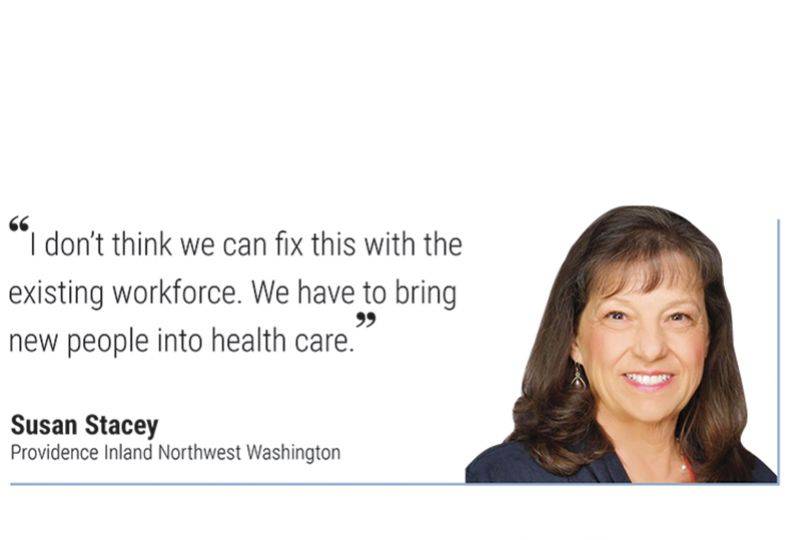 Employment in the health care industry is in a time of transition, industry executives say, and stability is unlikely to occur for a few years to come.

Susan Stacey, who became chief executive of Providence Inland Northwest Washington in February, says employment at Providence has been in flux over at least the past six months.

“We're seeing some turnover—definitely higher than we'd like—but we're also hiring more than we have,” Stacey says. “It's a lot of moving parts right now.”

From February 2020 to February 2022, Providence lost more than 200 employees in Spokane at Sacred Heart and Holy Family hospitals. The health care system now employs about 2,960 people. As of June 8, 816 open positions in the Spokane area were listed on Providence’s website.

Some turnover is due to career moves that had been postponed during the worst of the COVID-19 pandemic, Stacey says. Others have begun to take retirements that also were postponed by the crisis.

“We're seeing people retiring at numbers that are not unexpected, but certainly large,” Stacey says. “As people got to retirement age, many stayed through the pandemic in order to help, and now they're ready to retire.”

Matt Allore, assistant vice president of human potential for the Inland Northwest region of MultiCare Health System, says the rate of turnover at MultiCare facilities has been decreasing as workers turn toward helping patients with illnesses and procedures unrelated to the pandemic.

“With COVID hospitalization rates decreasing by and large across the country as a trend, the associated pressures on our workforce are different now in that we're focusing more on some of the backlogs for patient care and the procedures that weren't done, but now can be performed,” Allore says.

He says that in the most intense waves of the COVID-19 pandemic, MultiCare’s turnover rates were above the national average—more than 20% in some cases.

“Trending into Q2, in some areas of our organization, we're looking at single-digit turnover rates, though we still have some areas that are higher than average,” Allore says.

Those positions were more challenging to fill prior to the pandemic, including all night-shift positions, nursing, environmental services, and food and nutrition services.

From 2020 to 2022, the workforce at MultiCare’s Deaconess and Valley hospitals has increased from pre-pandemic levels; MultiCare employed about 100 more people in February 2022 than in February 2019. As of June 8, 292 jobs were available in Spokane at MultiCare.

Allore says a “return to the new normal” could mean more flexibility for the health care workforce.

“Even though it's busy, we can plan for it and ramp up when we need to or allow for time off when we don't have as many procedures,” he says.

“We're probably a couple of years from truly being stable, because we'll continue to see retirements,” Stacey says.

Allore says that while some health care workers who faced burnout were able to return to work after a break, others have left hospital work, or left the health care industry altogether.

“We're still recovering from that, but it is hopeful that we have seen our turnover rates decrease in the first parts of 2022,” Allore says.

Stacey says some Providence initiatives and programs already have begun to help with employee retention.

“One of the best things I think we've done is given our own caregivers a referral bonus if they get their friends and family to join Providence,” Stacey says. “The best source of workforce are the people who are already here. They're our best ambassadors, they understand what the work is, and to give them an incentive to bring friends and family onboard has worked effectively.”

Providence also recruits employees through hiring bonuses and retains them through wage increases, Stacey says. However, as the landscape of health care changes, so do the challenges employers face, she says.

“There's more remote opportunities to do telehealth, which is all good, it's just pulling people out of the hospital sometimes,” Stacey says. “As health care changes, the health care workforce is going to change, as well.”

Stacey says Providence and other health care systems have been working with high schools and universities to promote careers in the health care field.

“I don't think we can fix this with the existing workforce,” Stacey says. "We have to bring new people into health care.”

Both Providence and MultiCare offer earn-while-you-learn programs in which students are paid to complete training in nursing or medical assistantship.

Such programs at universities saw a boost this month. The Washington state Legislature on June 6 announced it will provide more than $38 million to expand nursing programs throughout the state. That includes $6.1 million that Eastern Washington University will receive to make its current two-year nursing program a four-year program.