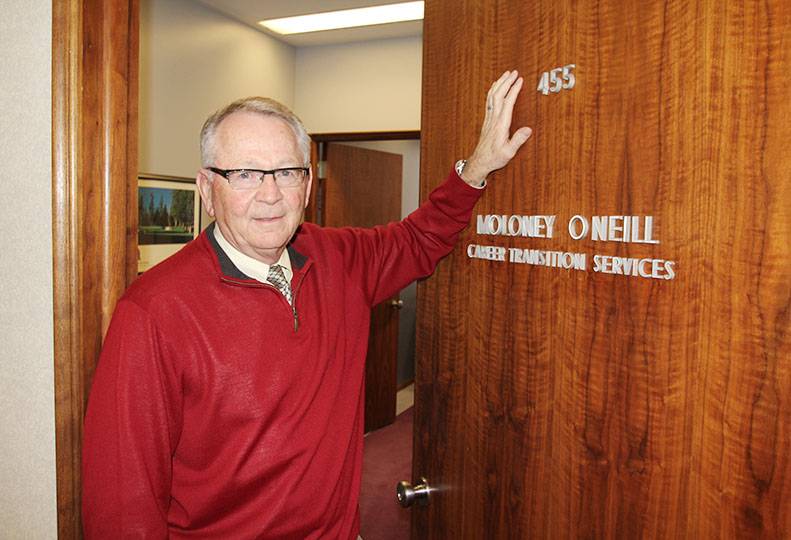 -—Mike McLean
Jerry Smith helps clients open the door to their next career moves as director of career-transition and outplacement services at Moloney+O’Neill.

As director of career-transition and outplacement services at Moloney+O’Neill, Smith takes on clients ranging from executive assistants to CEOs and helps them in their search for new careers or positions.

Some companies seek outplacement services because they want to help their terminated or otherwise departing personnel continue with their careers elsewhere, Smith says.

“First, it helps the person leaving an organization to get back into the workforce more quickly by developing a plan of action that serves them well,” he says of outplacement services.

Outplacement services also paint a positive image of the company and give “survivors” remaining there a better feeling to know their company is helping former co-workers, he says.

Smith says the individual remains in charge of the career-transition process.

“We don’t help them find a job,” he says. “We help them form a marketing plan.”

For a range of fees that usually are paid by the client’s former company, Smith coaches clients in adjusting to their departure from their previous organization, assessing their past performance and future options, and honing their networking and interviewing.

Of those components, networking usually is the key that opens the door for the client’s next career move, rather than any other traditional method of job search, Smith says.

He works out of a one-person office on the fourth floor of the Lincoln Building, at 818 W. Riverside, where he’s held the position with Moloney+O’Neill for a year now.

He’s been in the outplacement business for 20 years, though, having started in 1994 with The Mills Group Northwest, a Spokane human-resources consulting company.

Smith prefers the “career transition” label to “outplacement,” having gone through the transition process himself.

“Most people in my line are HR people,” he says. “I’m a marketing and sales guy.”

Smith was first introduced to the concept of career transition when he was outplaced by a former employer at the age of 51.

Smith had been the district sales manager for the Northwest states for Syntex Corp., a Palo Alto, Calif.-based pharmaceutical company, when it was acquired by Swiss drug maker Roche Holding Ltd. in 1994.

While a client of an outplacement specialist then, he realized he could transfer his own sales and marketing skills to help other people in career transitions.

“I needed to market transferability through networking,” Smith says. “I would never have been able to make such a move with the traditional search. I would have been rejected every time.”

Though career networking, he convinced key people that his skills would transfer to the human-resources field.

“Syntex provided the foundation,” he says. “Bert Mills gave me the opportunity to do this. I transferred to Moloney+O’Neill a year ago, and I’ll be doing this for a few more years.”

Smith says he’s coached about 2,000 people through career transitions over the years.

His current caseload is steady with 10 to 20 clients at any given time, and he schedules up to four appointments a day with individual clients.

Most of Smith’s clients are referred to him through Moloney+O’Neill by companies that pay for the services, although he also works on an hourly-fee basis for individual clients who hire him directly.

Smith declines to disclose his fee rates, citing the competitive nature of the business.

He offers levels of the career-transition program.

The levels include 15 hours of on-one-one coaching for valued staff that are below the vice president level, 25 hours for clients coming from supervisory positions, 35 hours for management-level clients, and a 45-hour program for senior executives.

Smith says he encourages clients to go through the program within 60 days of departing their previous position.

Smith’s program starts with helping the client through their adjustment phase.

“Some people are ready to go forward,” Smith says. “Some just found out yesterday that they are going to be leaving.”

Smith coaches clients to take ownership of their transition.

Every client is the CEO of their job search, he says. From the outset, they should set up a home office and devote regular hours to the job search.

“If you don’t, you could get into bad habits,” Smith says.

The early part of the career-transition program includes developing an exit statement and identifying references.

“They have to build an exit statement that will coordinate with what the organization is going to be saying,” he says.

After the initial adjustment, Smith coaches clients to conduct career and self-assessments.

“People need to know what they’re looking for,” he says, adding that their options don’t have to be limited to doing the same work at a different company.

He helps clients inventory their skills and identify skills that can transfer to other types of work.

Smith then helps clients uncover accomplishments that prospective employers will be interested in. It’s not always easy for clients to recognize their own accomplishments, Smith says.

“People tend to just do their job and don’t give themselves enough credit,” he says.

The self-assessment then provides the framework for a resume, he says.

Along with resume tutoring, Smith coaches clients in creating two-minute presentations about themselves and their career objectives.

“The focus in the search is going to be networking,” Smith says.

A two-minute presentation should include informed career choices and industries, transferable skills, and even a salary range, he says.

In career-transition networking, clients use their own contacts and the people their contacts know to help in their job search, Smith says, claiming that 85 percent of all jobs are filled through networking that traditional searches don’t find.

“I teach networking,” Smith says. “I see networking as a project.”

While there are several forms of networking in online, over-the-phone, and social settings, Smith says it’s vital to arrange face-to-face meetings with individual contacts in mutually comfortable places so the clients can give their two-minute presentation.

In most networking situations, clients should ask contacts to keep them in mind for referral purposes, rather than ask for a job directly.

The final component of Smith’s career-transition program is interview training.

“A perfect resume doesn’t mean anything if you don’t interview well,” he says. “Organizations are looking at you as an investment.”

During interviews, it’s important to demonstrate character in addition to skills and ability, Smith says.

“Skills and ability is what you do,” he says. “Values, principles, and character is who you are. If organizations don’t care who you are, that’s a problem, because you aren’t going to change that.”

Throughout the career-transition program, Smith advises clients not to get too locked in on the bull’s-eye.

“The target is a career,” he says. “If it’s a little off the bull’s-eye, it could still be on the target.”