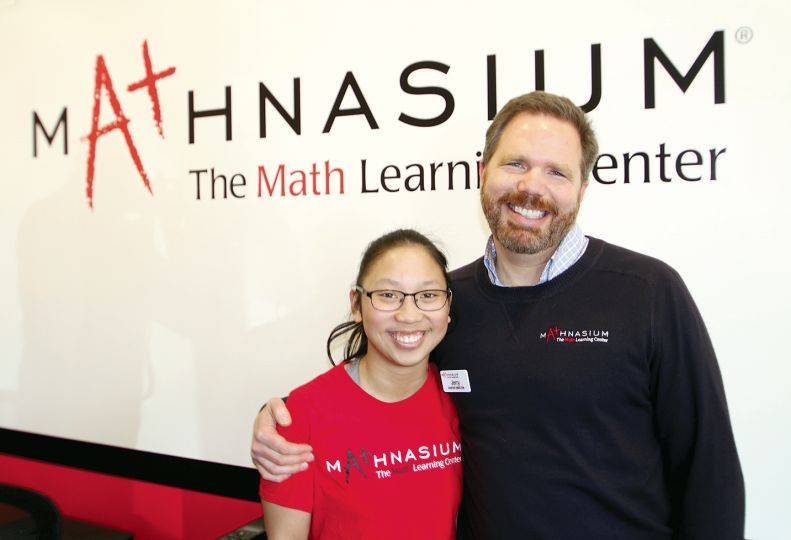 “It’s a personalized environment. Students are tested. They’re offered incentives. The price is reasonable, and I’m wondering, ‘Why hasn’t this been here before,” the elder Crawford says.

Located in the Lincoln Heights Shopping Center, at 2829 E. 29th, Mathnasium is operated by franchisee owner Jerry Post, a former longtime news director at KXLY-TV. Mathnasium is housed in roughly 1,500 square feet of space that once was home to a Radio Shack store.

Since opening on Dec. 26, Post and his team of six part-time instructors have enrolled 60 students in the Mathnasium program, he says.

“Right now, we have a ratio that’s about two or three students to every one instructor,” says Post. Mathnasium’s operating hours are 3-7 p.m. Monday through Thursday and 9 a.m.-1 p.m. and Saturday. Total hours students attend varies per the agreements parents reach with Mathnasium.

“It depends on their skill level and length of plan they’re signed up for,” he says. “So, there are varying price ranges, but in general, I would say on average, our cost is about $20 to $25 per hour per session.”

Mathnasium isn’t just about students who are struggling in math either. Post says many of the students who are enrolled are ahead of their assigned grade level, and their parents want to keep them engaged and not get bored with math.

A free, initial test is broken down into 30 different mathematical assessments that can take anywhere from 60 minutes to 90 minutes to complete, Post says.

If a parent decides to enroll a child in the program, those parts of the initial assessment in which the student lacks proficiency becomes a part of an individual learning plan, he says.

The learning plans vary in length, but Post says the average enrollee is typically enrolled for at least four to six months.

Mathnasium is headquartered in Los Angeles. In 2002 the first Mathnasium learning center was created in Westwood, Calif., according to the company’s website.

The trademarked Mathnasium Method teaching plan goes back more than 40 years when Mathnasium’s founder, Larry Martinek, wanted to explore different ways of teaching children math. Martinek was a teacher, trainer, and consultant in private and public schools and was a parent to a mathematically gifted son.

As he began developing his own teaching concepts for math, several Los Angeles-area schools, where Martinek lives, began using his teaching material.

Mathnasium seeks to bring mental, tactile, verbal, visual, and written skills to the process of improving on a student’s math skills. Students are taught how and when to abandon paper and pencil and employ mental techniques to solve a task, Post says.

Today, Mathnasium has more than 800 learning centers around the world, but the one Post opened is Spokane’s first-ever center, he says.

Post spent a total of almost 20 years at KXLY and 12 years as its news director. However, he began to get the urge to do something different about three years ago.

“I loved what I did,” Post says. “But I began thinking of what else could I do to help make a difference in this community.”

The thought process of moving to do something else also entailed conversations with his wife, KXLY meteorologist Kris Crocker, about how to support their family as the couple has three daughters.

“Being on your own and making a difference really only goes so far as your ability to make a living,” he says. “I just didn’t know what that was going to look like.”

Then, one day in 2016 on his way to work, he heard a national advertisement over satellite radio about franchisee opportunities with Mathnasium.

“I just filed it away for future reference,” he says.

Post went online and found Mathnasium’s website and inquired about an opportunity to be a franchisee. A year later, he made his first trip to Los Angeles to meet with the company’s representatives.

“I went down there and was super impressed with what they’re doing. I was totally sold,” he says.

Finally, last September, he notified KXLY of his intentions to leave the network.

“The station was beyond gracious, and there was about a three-month window we gave each other to be able for both of us to make the transition,” he says.

Now, the business has grown so fast that Post says he’s in the process of hiring another instructor. His current instructors are mostly college and high school math and engineering students.

One instructor is pursuing his master’s degree in mechanical engineering online through the University of Washington. Another is a double major at Whitworth University studying math and French, while yet another is a senior at Ferris High School who's taken advanced placement classes in physics and computer science.

Post also roped one of his daughters, 15-year-old Sophia, a freshman at Lewis and Clark High School, into the business as an assistant who can play math games and chess games with students.

Post says he’ll look to open other Mathnasium outlets in the Spokane area once he reaches 100 students.

“We’ve got parents bringing kids in from Cheney, Deer Park, all over the North Side and the Valley,” he says.

Jennifer Maxwell, the mother of Lewis and Clark freshman Emma Maxwell, says she’s ecstatic to have Mathnasium in the neighborhood.

“But this is perfect. It’s a great environment. It’s consistent, and the college students work great with the younger students,” Maxwell says.