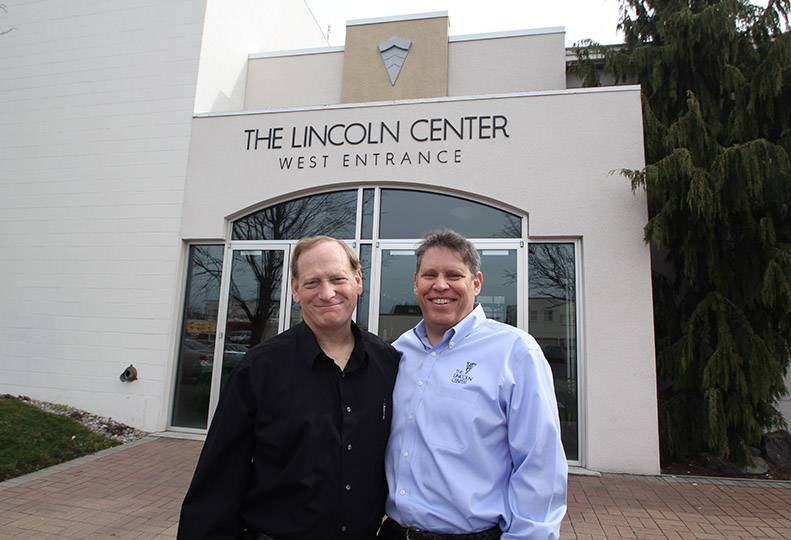 -—Staff photo by Mike McLean
Brothers Terry and Richard Heftel say The Lincoln Center's revenues have grown each year since the venue opened in 2008.

As the economy slid into a recession five years ago, it was an unnerving time to open a new event center in Spokane, says Richard Heftel, sales manager, marketing director, and co-owner of The Lincoln Center, at 1316 N. Lincoln.

Still, The Lincoln Center, with its multiple space-rental options, has found its niche, and revenues have grown each year, Heftel says.

Heftel and his two brothers bought the property through The Lincoln Center LLC, reportedly for $1 million, in 2006 and renovated into a full-featured event center two years later. "We're very pleased with our growth," Heftel says. "I hope it takes off even more as the economy comes back."

Some events, however, last more than one day, Heftel says. For example, one two-week corporate engagement counts as one event, and a few other corporate bookings are for weekly gatherings, which also count as one event per client.

The center has a number of advanced bookings for weddings and is seeing an increase in Sunday weddings.

"People are willing to shift weddings to Sundays, because most venues charge premium prices for Saturdays," Heftel says.

Heftel, a Provo, Utah, resident with a lengthy background in the hospitality, entertainment, and broadcast industries, has become more actively involved in operations at The Lincoln Center over the last couple of years. He works at the center four days a week and spends Fridays and weekends with his family in Utah.

One brother Terry Heftel, who has a background in construction and property management, is the general manager at The Lincoln Center. Another brother Chris Heftel, who championed improvements to the facility with the goal to convert it into "Spokane's premier event center," remains a minority owner.

The center includes the original church structure, which was constructed at the northeast corner of Sharp Avenue and Lincoln Street in the 1920s. It was expanded in the 1980s to include a second sanctuary on the north side of the original structure. The sanctuaries had been owned or leased by churches of a number of religious affiliations throughout the years.

When the brothers first acquired the property, it was a run-down facility with only one or two church renters at a time, Richard Heftel says.

"Chris wanted to renovate it, and we spent five times on the renovation what we spent on the purchase," he says.

Renovations included restoring former church sanctuaries as multiple-use ballrooms, converting former classroom space into modern meeting rooms, and constructing a 2,700-square-foot prefunction and storage addition. The project also carried the 1920s art-deco style of the older part of the complex throughout the center.

Wells Construction Inc., of Spokane, was the contractor on the project, and the Spokane office of USKH Inc., designed it.

The Lincoln Center still is home to one church and has room for at least one more for Sunday services, but the center's bread and butter comes from weddings, corporate gatherings, and nonprofit events, Heftel says.

The 29,000-square-foot facility has two large ballrooms, plus several smaller rooms that can be rented individually or in any combination.

The capacity for the separate spaces in the venue ranges from 16 people in what's called the Board Room to 650 for events in The Lincoln Ballroom.

The Lincoln Ballroom, which is the largest venue at the facility, is outfitted with laser equipment to enhance night club-type events.

The event center's other ballroom, the Monroe Ballroom, has a capacity of up to 325 people.

Both ballrooms have balcony-seating areas.

The Lincoln Center also has the Landau Conference Room, with a capacity of more than 120 people, and the Library room, which has an 85-person capacity.

The west foyer doubles as an art gallery and can be rented separately with a capacity of 65 people, or as space for a prefunction area for The Lincoln Ballroom.

The artwork in that foyer is rotated out every few months to showcase a different Inland Northwest artist or a community theme.

So The Lincoln Center brought on executive chef Brad Emery, who can manage food service for multiple events simultaneously.

The Lincoln Center also has a certified sommelier, or wine steward, on its staff.

The center is one of three Spokane-area winners of the Washington Wine Commission's 2013 awards of distinction, along with Churchill's Steakhouse, downtown, and Masselow's restaurant at the Northern Quest Resort & Casino, on the West Plains.

Ryan Biesen, the center's sommelier, says, "We are very complete on the high end and from there we can do anything else."

The Lincoln Center is home to a membership group called the Connoisseur's Club, which provides members with monthly wine selections and holds a quarterly winemakers' dinners.

This month, the Connoisseur's Club will introduce its Scotch Social, which will feature 13 varieties of high-end Scotch whiskey, premium Washington wines and appetizers accompanied by live jazz.

The club also puts on an annual Chocolate Therapy dinner, in which each of three chocolate-themed meal courses are paired with a complementary wine.

"Our next thing may be bourbon tasting," Biesen says.

The Lincoln Center also has generated its own gala events, including Bling in the New Year, which is a New Year's Eve party that takes up both ballrooms and features $25,000 in jewelry and gemstone-related prizes.