Low-impact development said to be in higher demand 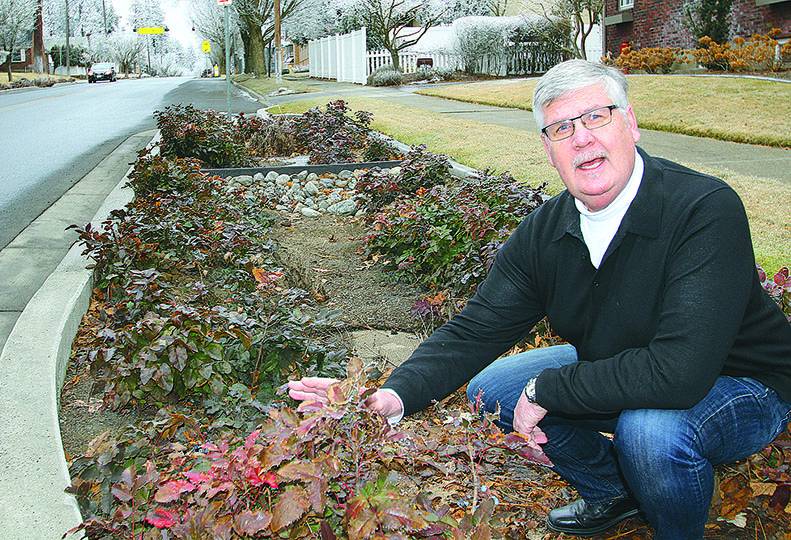 -—Treva Lind
Len Zickler, principal in the Spokane office of Tacoma-based AHBL Inc., stands in a rain garden along Lincoln Street on the South Hill.

He expects this approach, called low-impact development, to increase in demand.

Since 2010, he says the AHBL office has worked on four Spokane projects with significant environmental sustainability features. The latest design work is for an upcoming $2.5 million project to replace an asphalt median ditch between lanes on Country Homes Boulevard with a mile of buried pipe covered by soils and native plants to absorb much of the runoff from storms.

“I believe in the next 10 years we’ll see a significant shift toward the application of these technologies,” says Zickler, who during his 23-year AHBL tenure has consulted with more than 40 cities and counties in Washington state on how to apply low-impact development techniques.

The U.S. Environmental Protection Agency defines low-impact development, or green infrastructure, as building techniques that work environmentally to manage stormwater as close to its source as possible. Zickler says the most effective approach is distributing clusters of stormwater management techniques across a property.

“The techniques do a much better job if they are smaller scale and distributed,” he says.

Largely, the practices include installing drainage systems designed with specific plants and soils to absorb runoff more effectively. Other methods include installing rooftop gardens, pervious pavement areas that enable water to percolate into gravel underneath, and container collection systems to capture precipitation for eventual irrigation use. Additionally, properties can have clusters of small storm gardens with plants and soils to filter runoff, as well as plant-soil bioretention swales that are similar in function to traditional grassy swales.

He contends that consumers who want to live in such neighborhoods and cities with sustainable features also are affecting the trend here and in other parts of the state.

Zickler, a 63-year-old Spokane native, returned in 2008 from the Seattle area to open the Spokane office of AHBL, which offers engineering and land surveying services in addition to landscape architecture. Previously, Zickler worked for 18 years as a planner and landscape architect in AHBL’s Tacoma office. The company also has Seattle and Tri-Cities offices and employs 80 people overall.

The Spokane office is located in a leased 1,500-square-foot space downtown, at 827 W. First, and employs five people including Zickler. Those workers include a planner, another landscape architect, and two engineers.

Zickler says the Spokane AHBL office has picked up enough work that it plans to hire an engineer and one planner in the next year, and revenues here were up 50 percent in 2013 compared with 2012. For the entire company, AHBL reported $12.5 million in annual revenue in 2012, according to a list published in the Puget Sound Business Journal’s Book of Lists.

Since the late 1990s, he says, AHBL has worked on a number of West Side projects implementing low-impact techniques as cities there dealt with stormwater drainage regulations in the wake of federal rules to protect the endangered Chinook salmon. He says the low-impact development techniques have yet to gain widespread acceptance in Eastern Washington.

By developing greener infrastructure in the Seattle area, though, water quality improved, Zickler says. He adds, “The Puget Sound area cities found that conventional storm drainage practices were not doing a very good job in terms of managing volume or for water quality. That’s why the salmon was listed.”

At first, Zickler says, he heard skepticism and resistance from people here as he made presentations on low-impact development concepts to engineers, public board members, and other groups. However, that perception is changing, he adds.

“Often, the first thing out of people’s mouths was, ‘That won’t work here,’” he says. He adds that people mostly were skeptical because of the Inland Northwest’s winter storms and freezing temperatures, as opposed to Seattle’s milder weather and rainfall.

However, he con-tends that national studies and low-impact development projects throughout the U.S. have shown that winter storm conditions and freezing temperatures don’t hamper the effectiveness of green infrastructure techniques. Plus, more project owners here are demonstrating the methods as both an effective and affordable way to manage stormwater runoff, he says.

He adds that University of New Hampshire research has found that pervious pavement that typically is made with concrete effectively contracts and expands while remaining structurally sound in areas of the U.S. that experience freezing temperatures followed by a quick thaw.

Zickler says pervious pavement contains tiny air pockets, or voids, that are evenly spread out. The voids vary in size from fractions less than a centimeter to a centimeter, which enable stormwater to infiltrate into the gravel layer below but also allow the concrete itself to expand and contract.

“Pervious pavement structurally performs just as well as a slab of concrete used in a traditional design structure system,” he says.

While he says pervious pavement typically costs about 15 percent more than traditional asphalt paving, he contends that its application along with other green infrastructure can free up more buildable space for retail or other business uses. For example, he says, a traditional technique to build large grassy swales that rely mainly on capture and evaporation can take up to one-third of a parcel.

“If you can save a couple of acres on a 10-acre parcel, you make that available for more development space, more retail sales, and more business income translates to higher tax revenues,” Zickler adds.

In addition to the Country Homes Boulevard project, the AHBL Spokane office has finished work on three projects that employ low-impact development techniques for the city of Spokane as the municipality takes steps to reduce the volume of untreated discharges into the Spokane River.

Similar to hundreds of U.S. cities, Spokane is adding infrastructure that better manages stormwater runoff to reduce pollutants entering waterways as required by the federal Clean Water Act and other regulations.

“In using the conventional pipe and catch system, those pollutants would be transmitted to the sewer plant, and when there’s a flash storm, those pollutants bypass the plant and overflow into the river,” Zickler says. “That’s what we’re trying to avoid.”

In 2010, the AHBL office here designed a $423,000 stormwater management system along two blocks of Broadway Avenue west of the Spokane County Courthouse that included installing 30 landscaped concrete boxes built at ground level along a parking strip.

Zickler says that as storm drainage runs off the street and enters the landscaped containers, the mixture of soils and plants naturally filter the stormwater. The city paid for the project with a state Department of Ecology grant and federal stimulus funding.

In another project finished in 2011, the AHBL office here provided landscape architecture services for an $800,000 city of Spokane stormwater management project called the Lincoln Street Spokane Urban Runoff Greenway Ecosystem (SURGE), on the South Hill. The project included installing curb extensions with a series of storm gardens, filled with plants and soils designed to collect storm flows, and the construction of a separate stormwater piping system that empties overflow into the Cannon Hill Park pond, Zickler says.

For a $230,000 project finished in the fall of 2012, AHBL designed stormwater drainage improvements for a project called Hazel’s Creek, which is on about 20 acres east of Regal Street and north of 20th Avenue, next to and south of Ferris High School. Hazel’s Creek is a surface stream that runs through the property.

The site also has a rain harvesting system, and an observation platform foundation with pins driven into the platform so runoff can flow laterally underneath.

He says what is called a storm garden or rain garden slows the travel of stormwater downhill and gives the runoff more time to infiltrate the ground. These gardens include a mixture of soils full of living organic matter, he adds, that along with the plants absorb and naturally filter water as it penetrates.

Bioretention is a low-impact development practice developed in the early 1990s that also uses soils and plants to remove pollutants from stormwater runoff, as opposed to more traditional grassy swales or evaporation ponds.

Typically, bioretention sites have a recessed space or are located on a lower elevation on a property, he adds. Depending on the property, bioretention systems don’t require piping and tank storage for excess water, although they can in areas with a high water table, or shallow depths to bedrock, he says.