Making history at the Riverfalls Tower 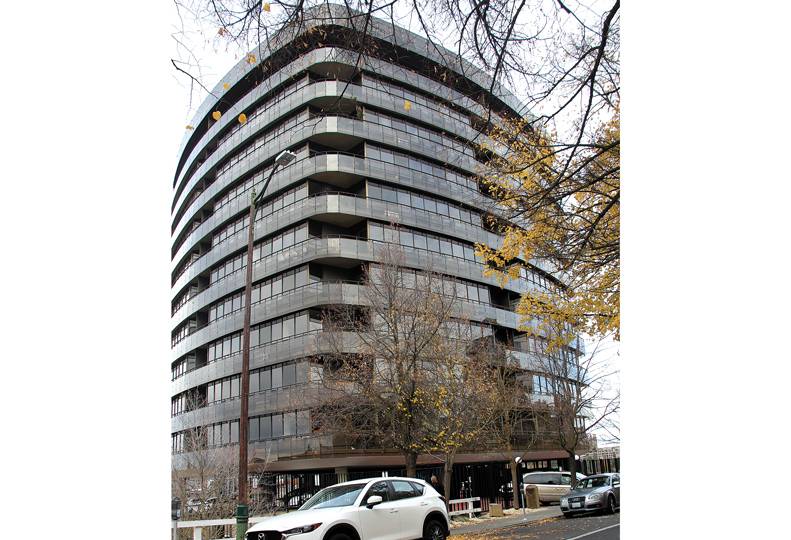 Two properties in Spokane’s Riverside District, on the west edge of downtown, have been approved for inclusion on the Spokane Register of Historic Places, says Logan Camporeale, historic preservation specialist for the Spokane City-County Historic Preservation Office.

The Spokane Historic Landmarks Commission has approved one nomination for the former Knights of Pythias Lodge Hall, located at 1203 W. Riverside, which is currently home to the Spokane office of NAC Architecture.

The other nomination has been approved for the Riverfalls Tower apartment building, located at 1224 W. Riverside, across the street from NAC Architecture’s offices.

Riverfalls Tower was constructed in 1973.

“We listed the youngest property that we’ve ever listed,” says Camporeale. “We actually have a guideline that our properties need to be 50 years old for listing, but we did make an exception. This one’s actually only 48 years old, but it’s exceptionally significant.”

Ann Martin, principal architect at Spokane-based Heylman Martin & Associates PS, says her father, Warren C. Heylman, was the architect on the building and owned it. She says she chose to nominate the property for the Spokane Register of Historic Places in order to have the historic designation of the building completed while her father can still comprehend the significance of preserving one of his favorite works in Spokane.

Heylman is 98 years old, and Martin says, “He can’t remember much at all, but Riverfalls Tower is still the one thing that’s still at the front of his hard drive. My dad is alive and physically fit, but his memory is just gone, but boy, does he remember Riverfalls. He would have me take him there every day if we could.”

Another reason Martin says she chose to nominate the tower to the register is to maintain the integrity of the design of the building. She explains that the tower’s five levels of sloped concrete parking were poured in place and the floors above were constructed with a lift-slab method.

“What it was, was essentially a stack of pancakes. Each of the slabs was poured independently, but then stacked with … some sort of a membrane that separated them.”

Ideally, jacks would then lift the slabs, and the slabs would separate and get lifted into place.

However, Martin says, “In ’71 or ’72, when this was being constructed, and I was just a kid at the time, I remember my dad coming home night after night for I feel was over a week, maybe two weeks, saying, ‘Those slabs are still stuck together. Yep, they’re still stuck,’” Martin recalls. The membrane in between the slabs had failed due to the slabs’ weight, she says.

Martin also says she plans to replace the glazed storefront window system on the exterior of the apartment tower to increase energy savings in the future and the historic preservation office provides property tax savings to help accomplish that.

The Knights of Pythias Lodge Hall is a three-story red clinker brick building that was built in 1911, according to nomination documents submitted for listing it on the Spokane City-County Register of Historic Places.

The nomination documents also show the former lodge hall was eligible to join the Spokane historic register due to two categories of significance: its role in Spokane’s history and its architectural significance.

The property adds to Spokane’s history in that it was built just a year after one of Spokane’s exceptional periods of growth, which occurred from 1900 through 1910. The property also was constructed during the expanding fraternal lodge movement in the city at the time. Riverside Avenue is also home to other fraternal lodges including the Elks Club and the Masonic Temple.

The former Knights of Pythias lodge hall holds significance architecturally due to its use of limestone, pressed tin building materials, and clinker brick—a dense and often misshapen brick named for the metallic sound made when bricks are hit together.

“With the exception of its sash and entry door, the building is essentially unaltered from its original construction,” nomination documents say.

Camporeale says the city allows a tax incentive in which the value of qualified rehabilitation expenses won’t add to the taxable value of a historically listed property for a period of 10 years.

There are other incentives to include properties on the historic register as well. For example, Camporeale explains that property owners who are fond of their properties may want to protect their designs into the future.

The register also allows the city to tell its story with the built environment, and citizens enjoy touring and living in historic neighborhoods with historic character, he says.

The Historic Landmarks Commission is comprised of 11 city of Spokane and Spokane County residents who hold professional expertise in history, architecture, and appraisals. The commission is tasked with approving or denying historic register nominations.

The commission follows a set of guidelines to determine if the property is old enough or if it has an association with historic events or people of interest. The commission also determines whether there are distinctive characteristics of the property that are tied to type, period, or method of construction and if the property has, or is likely to offer, information important to history.

Camporeale says the commission meets once a month. Property owners pay a fee of $153.50 for residential applications and $203.50 for commercial applications for historic designations but may spend additional funds to hire a consultant to work on the nomination application.

Most property owners hire a consultant to prepare the nomination document, according to Comporeale. “It’s basically your one chance to tell the history of the building and also to argue or explain why it’s a significant property,” he says.

Nominations need to be submitted four to six weeks in advance of the next commission meeting. After the nomination is placed on the agenda, commissioners will make their decision. If approved the nomination is then recommended for listing on the City Council’s next meeting agenda.

About 370 properties are listed on the Spokane Register of Historic Places.

The U.S. Department of the Interior operates the National Register of Historic Places, which is a separate list from the Spokane register.

Camporeale says there are approximately 130 Spokane County properties on the national register. Those properties are eligible for federal grants and tax credits for approved renovations, as well as recognition in national listings, and a bronze plaque to display on the building. He says, however, the national historic designation doesn’t guarantee the property will be protected or preserved in any way.