Company to coordinate two events at Cd’A Resort in April 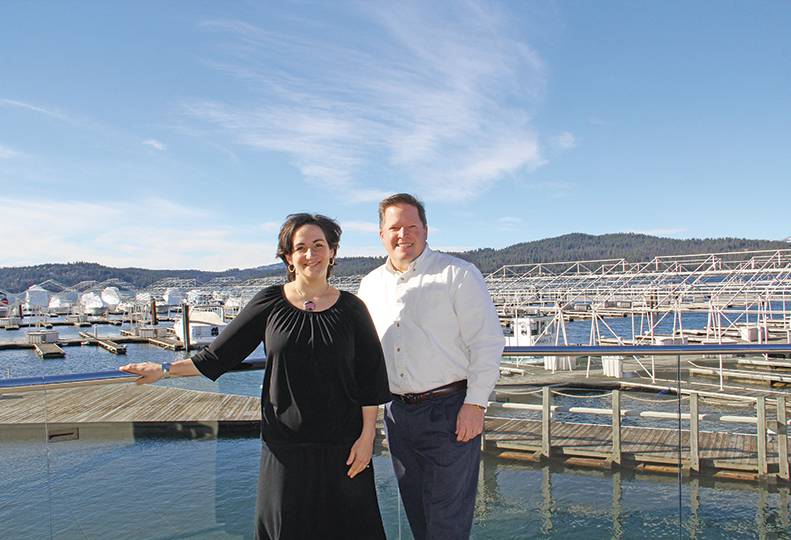 Coeur d’Alene-based Framework LLC, which does business as Framework Meetings & Destinations, expects to book more than 50 corporate training events and meetings and more than 120 other events throughout the U.S., say co-owners Wendi Haught and Scott Shellman.

The company is projecting about a 10 percent growth in number of events booked over 2013, Haught says. That’s on the high end of the company’s typical annual growth, which she puts at 8 percent to 10 percent a year.

“The mix changes each year, the difference between corporate and stand-alone events, but this year is definitely on the high end,” she says.

Haught and Shellman, who co-founded Framework 5 ½ years ago, generally take on whatever a client needs done, Haught says.

“We’re not really an event planner, and not really a tour operator,” Haught says. “But we have elements of both. We make up those customized pieces. If clients say, ‘Hey, do you…?’ We do.”

A majority of the company’s business is corporate meetings and events, Shellman says, and in that role, its most often involved in assisting clients with selecting a site for the meeting or event, usually at a resort, hotel, or convention center, he says. It also helps clients secure contracting for guest speakers, transportation, catering, and electronic services.

“There’s a thousand little details that if someone isn’t prepared for, they can end up overpaying,” Shellman says.

The remainder of the company’s work is in the details, Haught says, such as ensuring that electronic equipment and Internet service is set up properly or making sure heating and air conditioning units are running appropriately. These types of details are things that clients often don’t think about, Haught says.

A large portion of Framework’s business is arranging events for about 200 to 300 people, Haught says, but she adds, “We’ve done events for as small as four people all the way up to 2,500,” she says.

The company doesn’t charge clients for its site selection services, Shellman says. Instead, it receives a sourcing fee from the venue booked by the client. However, Haught says Framework doesn’t have a contract with any specific venues.

“Some companies are tied to a specific hotel chain; we are not,” she says.

While the largest piece of the company’s revenues comes from the site selections, Shellman says, it also sometimes charges registration fees to the individual event attendees. If contracting staff for a client, Framework charges an hourly or flat-day rate. A tour guide can run a client about $75 to $100 for two or three hours, Haught says. Any staff needed for a full-day event will cost the client about $400 per staff member per day. Haught says that the duo analyze staff rates each year.

“We do take a look every year at our pricing strategies to make sure we’ve competitive,” she says. “We don’t want to be the high one or the low one, we want to be in the middle.”

Haught says Framework generally markets its services through word-of-mouth referrals and building client services over time. She says a client may contract catering through Framework one year, and then the next year add transportation to that, and so on. Haught also says the company makes an effort to maintain good working relationships with the hotels and caterers it works with.

Shellman and Haught both formerly worked in the hospitality industry in a variety of positions, such as catering and conference management, food and beverage services, and general management, so the two put a high priority on maintaining working relationships with local hospitality professionals, Haught says. In the past, Haught and Shellman had careers at hotels such as the Coeur d’Alene Resort and also with Red Lion Hotels Corp.

“Because we come from a hospitality background, we have good relationships with the hotels’ sales staff and caterers,” Haught says.

In April, Framework has two large events at the Coeur d’Alene Resort, Shellman says. One is a conference of emergency medical services associates; it also happens in Salt Lake City annually, an event that Framework also coordinates. The informational and training conference will draw attendees such as emergency services, risk management, and safety professionals, Haught says.

Also in April, Framework will coordinate a conference of the International Association of Industrial Accident Boards and Commissions, also at the Coeur d’Alene Resort, Haught says. She says attendance at that event is expected to be about 150 people.

The company, which has one additional full-time employee, got its name, Shellman says, from the idea of the framework within a building. Framework stays behind the scenes, he says, acting as the support for the event.

“Take a building; if it’s got a solid framework, it’s going to be around for years to come,” he says. “But you can’t see the framework.”

Framework’s name often is not seen by or known to event attendees, Haught says.

“We do 17 programs a year for a tech company, and our name will never be on it,” she says.

Framework’s largest client, Shellman says, is Ohio-based Certified Angus Beef LLC. Shellman estimates that Framework will coordinate between 12 and 15 events for that company this year.

Framework operates mainly by contracting third parties to staff events and meetings and has amassed a large network of independent contractors, he says. For example, if the company is running a bus tour and the client would like lunch served on the tour, Shellman and Haught would reach out to chefs in the area to see who could be contracted. This is made possible by their connections in the hospitality industry here, Shellman says, because the two made contacts while coordinating event services for hotels here such as The Red Lion, The Davenport, and Coeur d’Alene Resort.

Haught says that by using independent contractors, the company can tailor tours and events to the specific history of a place or the needs of a client.

“If it was just an employee of ours, they’d be doing something not in their repertoire at some point,” she says.

Shellman agrees, saying, “It’s not us standing up there, it’s subject-matter experts.”

In the past, the company has contracted master gardeners for tours of Manito Park, and an employee of Shepherd’s Grain for a tour of the Palouse region.

“It takes some extra work, but the staging makes it much more memorable,” Shellman says. “They’re hearing from someone who knows their stuff; it’s not scripted.”

While both Haught and Shellman are based out of Coeur d’Alene and mainly work from home, Haught says she spends about three days a week working in Spokane. The company does more business in Spokane than Coeur d’Alene, she says.

The company makes an effort to keep its work diversified, Haught says, and each year, its mix of event types varies.

“We were founded during the economic downturn, and we saw peers go down from having an undiversified portfolio,” she says.

Shellman says that while Framework mostly does corporate events, a corporate client occasionally also will contract the company for other business. For example, he says, one client from Certified Angus Beef contracted the company to do his child’s softball team’s travel bookings.

“Our sweet spot is clients who have an administrative assistant doing the planning; they don’t have a meeting planning department,” Shellman says.

Both Haught and Shellman say Framework might have some opportunity to hire part-time workers in the future, depending on the season. They also say they’re working towards growing the number of clients booking into the Spokane area.

“For hospitality as a whole, there’s a lot of talent in this area,” Shellman says. “We’re huge cheerleaders for this region.”

Shellman says that the Spokane area’s natural resources, activities, quality hotels, and general friendliness make it attractive to groups looking to book events. He also says that large events, such as the NCAA tournament games being held here this month, attract visitors from far and wide who might wish to return for corporate meetings or other group events.

“You really, truly don’t know where that good experience someone had will pop up,” he says.