Troupe to present ‘Guys and Dolls’ in September 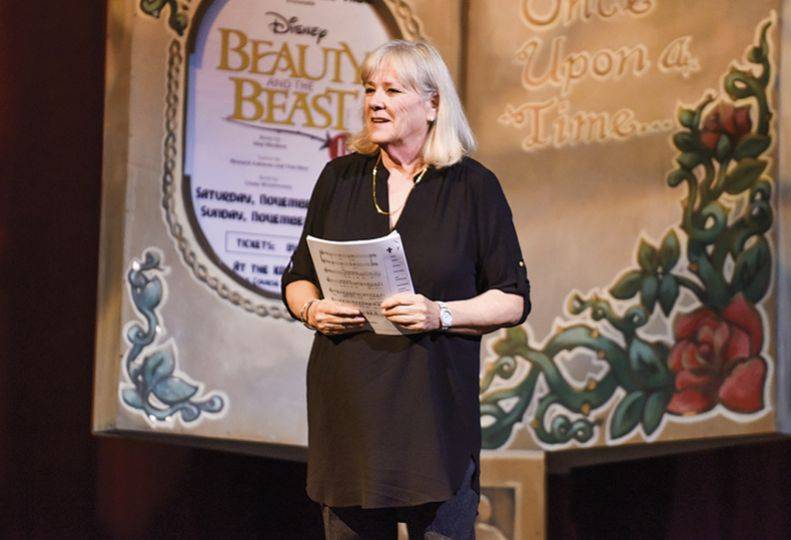 -—My Turn Theater
Wendy Carroll helps to put together productions for actors with special needs, including a version of Disney’s Beauty & the Beast.

After successfully launching a theater company for disabled actors in Coeur d’Alene, Wendy Carroll is working to establish a similar organization, My Turn Theater, in Spokane.

Carroll, who is executive director of the organization, says My Turn Theater produces musicals in which the cast is composed of physically and intellectually disabled actors, most of whom are adults in their 20s and 30s.

Each actor is accompanied by a nondisabled companion actor. The companions, also called shadow actors, are meant to support their actors while blending into the background. Companion actors wear dark clothing and don’t typically speak unless to assist actors with lines and direction. Companion actors also sing in the chorus during musical numbers.

My Turn Theater was created earlier this year as a 501(c)3 nonprofit. It operates out of Carroll’s home on Spokane’s North Side.

My Turn Theater will perform “Guys and Dolls” Sept. 9-11 at the Bing Crosby Theater.

That is, if the theater company can drum up a full cast.

“We’re still looking for people, even though we started rehearsal already,” Carroll says.

Carroll launched her first nonprofit organization, Out of the Shadows Theater, in Coeur d’Alene in 2016. Out of the Shadows produced musicals such as “Beauty and the Beast Jr.,” “Fiddler on the Roof,” “Mary Poppins,” and “The Music Man.”

When COVID-19 pandemic-induced restrictions prevented rehearsals and effectively shut down theaters in 2020, Carroll and her son moved to Spokane. Out of the Shadows has continued under the leadership of its board of directors.

Establishing Out of the Shadows Theater in Coeur d’Alene in 2016 was somewhat easier than launching My Turn has been so far, she says.

“We’ve had a really hard time connecting to the disabled community” in Spokane, Carroll says. “I didn’t have that problem in Coeur d’Alene, but then again, we were pretty strongly linked in, because my son has special needs.”

Carroll says that, while many Spokanites were involved in Out of the Shadows, an abundance of acting opportunities earlier in the year has meant many in local theater are too busy with other productions to work with My Turn.

“All of the theaters were opening up, so there were auditions all over town,” Carroll says. “Suddenly, all of these actors who had been dying to get onstage had so many opportunities, and we’re not exactly on the top of their list.”

It also has been challenging to find rehearsal and performance spaces that are wheelchair accessible, she says. Two Spokane churches function as rehearsal spaces. Carroll says Gonzaga University’s Myrtle Woldson Performing Arts Center is the only theater in Spokane that has a wheelchair-accessible stage.

“Spokane needs to recognize that handicap accessible in the theater means onstage, not just the audience,” Carroll says.

“They were talking about making some temporary dressing rooms backstage for the people in wheelchairs,” she says. “We’d do it if we had to, but my concern is that it still isolates people, it still says ‘you’re different.’ We’re trying to make it totally inclusive.”

My Turn has received grant funding from Spokane Arts, Carroll says. She’s applying for additional grants from sources such as the Washington State Arts Commission, STCU, and Avista Corp. In the meantime, Carroll and artistic director Lorna Hamilton are funding My Turn’s first production.

My Turn won’t charge a fee for tickets, instead relying on donations, Carroll says.

“If people donate a reasonable donation, and we get enough people coming in, that will usually pull us over the finish line,” Carroll says.

Carroll says the budget for “Guys and Dolls” is about $20,000. That includes stipends for companion actors and those who work behind the scenes.

“The cost of living is going up and gas costs a lot,” she says. “If buying gas is holding them back from helping us, we can get a stipend to help with the gas, if that motivates anybody.”

Carroll says she was inspired to create a nonprofit theater organization for disabled adults by her son, Toby, who has several disabilities. Toby performed in 2016 as Cogsworth the Clock in Out of the Shadows’ first production, “Beauty and the Beast Jr.,” an adaptation of the Disney movie.

Carroll, who worked as a producer in the film industry for Walt Disney Studios and the Arizona Film Commission, says she dabbled in theater before she had Toby. She reentered the theater world when Toby was old enough to attend auditions, rehearsals, and performances with her.

“The theater community was very kind and embraced him. They all knew that if they cast me, they got him too,” Carroll says. “I was on a stage one night doing an audition. My son was sitting out in the theater seats by himself. I glanced at him, and I sort of heard this silent voice say, ‘When is it my turn?’”

Many who signed up for Out of the Shadows’ first production lacked experience in theater, Carroll says.

“A lot of these people had never even seen a play before,” she says. “They had never been in a performing arts theater,” she says.

Carrol worked to accommodate the needs of each actor. Some actors had mobility aids such as wheelchairs or walkers. Some held comfort objects, such as dolls, and were allowed to continue holding them during rehearsals and performances. A group of actors in wheelchairs swept across the stage as a pack of wolves in a dance.

“Our company is all about enhancing the ability, and the disabilities become secondary,” Carroll says. “It’s what can you do, not what can’t you do.”

Out of the Shadows held its first performance of Beauty and the Beast Jr. at The Salvation Army Ray & Joan Kroc Corps Community Center’s 400-seat theater. Carroll says the cast gave an inspiring performance.

“It was like somebody charged their batteries,” Carroll says. “When the curtains came down, we had five full sustained minutes of applause.”

The actor who played Gaston has found continued success in local theater.

“They cast him in regular shows, and he has lines,” she says. “He’s totally part of the theater scene. I’m so proud, because they wouldn’t have given him a chance, but they saw him and said, ‘He can do it, so why wouldn’t we cast him?’”