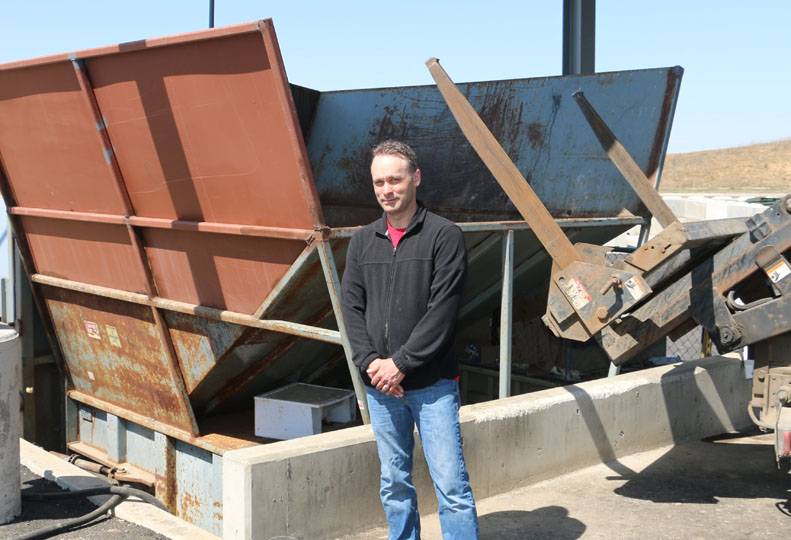 Eastern Washington University has opened a new recycling center that it hopes will help it advance its recycling efforts.

The 5,000-square-foot facility on the EWU campus in Cheney provides spaces for sorting, recycling, storage, and office use, and has two covered loading docks, says Scott Buck, who supervises the facility.

Recycling centers still aren’t commonplace on most college campuses, says Buck. To his knowledge, Washington State University in Pullman is the only other college in the area with a complete recycling center. While most colleges are involved in collecting recyclables, those materials have to be transported and processed at a cost, Buck says.

The $1.7 million project at Cheney is part of Eastern’s ongoing commitment to one day be a campus that generates “zero waste,” says Buck, whose official title is transportation supervisor. With the new recycling center, the EWU campus has the ability to recycle at least two dozen types of materials, says Eastern Washington University’s website.

And to complement EWU’s recycling efforts, the university moved the EWU Surplus Sales store from its former home in downtown Cheney to a space next to the recycling center.

“This is a much better location for us because being downtown was just completely out of the way,” he says. Leftover products that don’t get sold make their way to recycling.

Construction started last July and was completed in March, says Ryan Homola, project superintendent for Halme Builders Inc., of Davenport, which EWU hired to build the center. ALSC Architects PS, of Spokane, designed the facilities. The surplus sales store alone has 2,800 square feet of space and is next door to the recycling center, Homola says.

“Quite a bit of thought went into this project, which helped us out quite a bit,” he says.

One challenge the company didn’t foresee involved the ground.

“This area has soft clay, and when there’s moisture during construction it can turn to muck, at which point you just have to wait for the ground to dry. We all kind of pulled our hair out on this deal at times,” Homola says.

The recycling center and surplus store are just north of Roos Field, home of the EWU football team. And this past football season, the college’s recycling efforts joined the football team in the national rankings, says Buck.

“The Environmental Protection Agency established what’s called the GameDay Recycling Challenge among colleges and universities across the country that have football teams,” Buck says. “Each week, you’re ranked against all the other participating schools to see who can recycle the most among leftover trash both inside and outside the stadium.”

The EPA set up the competition to promote waste reduction on college campuses across the country. During football season, colleges and universities implement their own waste reduction programs. The schools then track and report disposal data, forward the information to the EPA, and then are ranked, says the EPA website.

EWU finished the football recycling season ranked 15th in its “diversion rate”—the ability to direct garbage away from landfills and incinerators through reuse and recycling—among 91 colleges and universities that participated, says the EPA website.

The EPA reported that EWU cleanup crews recycled, repurposed, and composted 61.7 percent of all trash collected on game day. Since that was before the recycling facility was finished, Buck expects EWU’s “diversion rate” to rise next season.

Buck is one of two full-time employees who work at the center, and six students work there part time. Together they spearhead EWU’s recycling education effort. Recycling bins for a wide array of materials, especially plastic, paper, and glass, are placed across the EWU campus, he says. Those recyclables are then transported by vehicles to the center to be sorted and recycled.

“We’re composting out of the back doors of our dining facilities now,” Buck says. “We’re generating 120 tons of compost per year.”

Buck says that effective environmental education is ultimately what is key to a successful recycling program. “You have to continue to raise awareness, and through the years, Eastern has done a good job of that,” he says.

From an anecdotal perspective, Buck says students who come to EWU from Portland and Seattle areas seem to be more knowledgeable—and diligent—about recycling than their peers from other areas.

“I’d say students are generally split between knowledge and understanding and seeing the significance of recycling, that’s why the education piece is so critical,” he says.

From fliers and reading materials distributed around campus to online videos and presentations, Buck believes that has had the greatest impact on the university’s increase in recycling.

On Earth Day, the recycling team passed out reusable water bottles as EWU is in the process of installing water stations around campus in an effort to cut down on plastic water bottles.

Buck says EWU’s largest purchaser of its recycled material is Pacific Steel & Recycling, of Spokane. Due to “wild market fluctuations,” says Buck, establishing consistent income based on recycling is a challenge.

“I have seen the price of cardboard range from $35 per ton to as high as $140 a ton,” he says. “I once had a company offer us $108 per ton for plastic, and then another offered absolutely nothing for it.”