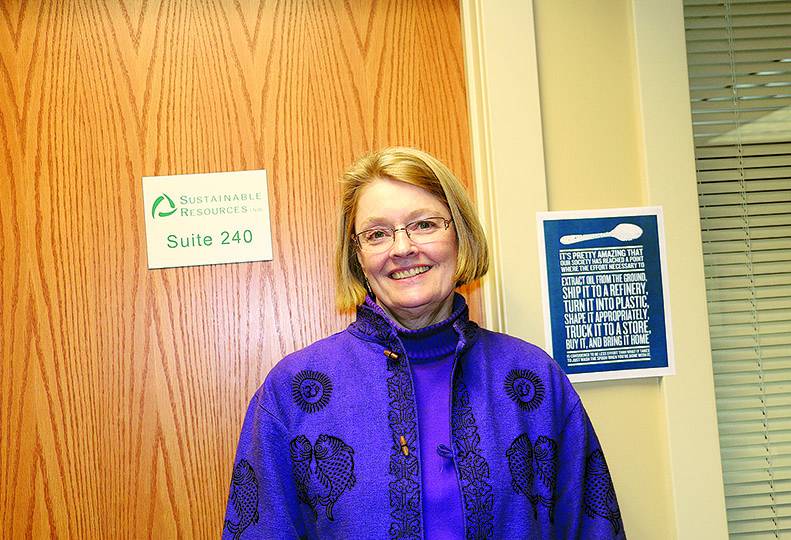 The purpose of the network is not only to reduce waste, Croft says, but to provide businesses with resources that are declining naturally.

“The industrial era has led to consuming raw materials faster than they can regenerate,” Croft says. “Businesses need to either find other resources or glean them … Ecosystems are declining as population and consumption are increasing. This is the only way I can think of to keep a consumer economy going.”

The network will launch during two workshops in coming weeks, Croft says. The first workshop will be a resource flow mapping course on May 22, and the second will be a materials exchange speed networking event on June 19. Both events are to be held at the McKinstry Innovation Center, at 850 E. Spokane Falls Blvd. Participants are expected to attend both events, as they’re meant to be taken as a pair, Croft says.

RE:Source is funded by a two-year, $108,000 Washington state Department of Ecology Public Participation Grant, which was awarded to Sustainable Resources last August, Croft says. Business won’t be charged to join the network or for the workshop events, Croft says.

The grant, which is entirely reimbursement based, pays for Croft’s time to run the network, a workshop facilitator, and researchers to analyze data collected at the workshops. The data will show what resources a businesses is using, what it’s throwing out, and what it needs, Croft says.  The researchers will then try to match waste from one business with the resource needs of others.

Businesses that join the network and attend the workshops will learn about being conscious of what resources are being used and how to embed sustainable practices within a business, Croft says. They also will be eligible for free sustainability audits and can apply for the Sustainable Management of Assets, Resources and Technology, or SMART recognition program, without paying an application fee. The SMART program recognizes and promotes businesses here that practice sustainability.

As an example of byproduct synergy, Doug Krapas, environmental manager for Inland Empire Paper and a RE:Source leadership team member, says the company can manufacture paper with up to 60 percent recycled material. Inland Empire Paper takes wood waste from sawmills and uses it in its paper-making processes. The company also collects waste paper from as far as 1,500 miles away and uses it as raw material for new paper, Krapas says.

“We take that sludge and actually consume it to make energy to help power our facility,” he says.

Once the sludge has been burned, the ash can be used in the manufacturing of cement products and compost, Krapas says.

Croft says businesses that participate in the network not only will learn how to repurpose waste and other products, but also will save on the costs of waste disposal.

“The beauty of it is there’s some immediate cost savings because you’re not paying someone to haul your waste away, and you could also sell it,” she says.

The network will help strengthen relationships here, Croft says, something that the business community here is known for.

“It’s so relationship based here,” she says. “This relies on and strengthens business relationships.”

In addition to building relationships in the Spokane business community, Croft says the network will aim to connect businesses here with other by-product synergy networks in the Pacific Northwest, such as the Seattle-based By-Product Synergy Northwest program.

“Businesses here that participate will immediately be connected with others,” she says.

There are some potential obstacles to the success of a byproduct synergy network, Croft says. Some technology companies might be reluctant to repurpose waste that contains trade secrets, she says. Other possible barriers are having the space to store waste for later repurposing and having the time and knowledge to reuse it, she says.

“These are some of the challenges this network will address,” Croft says.

Krapas says he also sees potential challenges in getting businesses to participate in the network.

“With anything, it’s a matter of people finding the time to participate,” he says.

Krapas says that for the future, he’s hopeful Inland Empire Paper will be able to share its knowledge of sustainability with other businesses in the network—and perhaps learn something from others.

“I think the most rewarding aspect for me would be to see other businesses and consumers implementing practices of sustainability,” he says.

Croft says she is hoping to apply for and receive another two-year grant before the current one expires.

“I’m very hopeful we’d get it,” she says. “Byproduct synergy is the state Department of Ecology’s top priority.”

After four years of a no-cost network, Croft says she hopes businesses here will have embedded the practice into their business models.

“I would imagine people would be very interested in carrying it forward,” she says.