AllWest sees program as extension of its testing, certification side 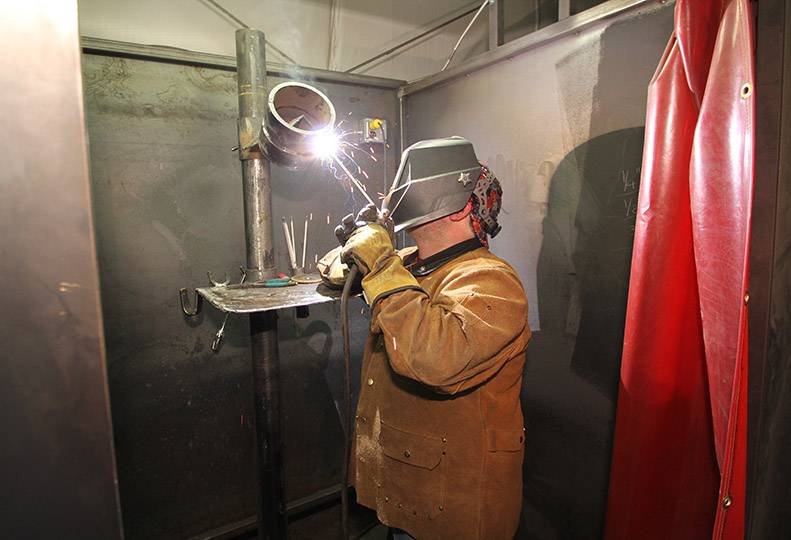 -—Staff photo by Mike McLean
Joe Fitzgerald, of Hayden, is taking the welding courses at AllWest Testing & Engineering and is eyeing a career working as a welder on pipelines.

The company fared well during the recession with revenues balanced between the testing and engineering sides of the business and growing steadily, says Mitch Keith, testing principal, who is one of five owners of the company.

In its engineering side, AllWest provides geotechnical engineering services, which include working with civil, petroleum, or mining engineers to design land-use plans based on geological site conditions. The company is registered in 15 states to provide engineering services, including all of the Pacific Northwest, Montana, North Dakota, Alaska, Texas, and Florida.

Its testing side includes inspecting and testing soils, concrete, asphalt, masonry, and various materials for strength, absorption, shrinkage, density, and other qualities for contractors, developers, designers, and government agencies.

Keith heads the company's nondestructive testing division, which tests for metal defects and fabrication flaws through a variety of means, such as magnetic particle inspection, dye penetration, and ultrasound monitoring.

He worked in the construction industry before co-founding AllWest.

"I've been in steel inspection a lot of years," Keith says. "It gives me the background to oversee this division."

He's based in the company's Post Falls office, which occupies 11,000 square feet of space in a multitenant commercial and industrial center at 4470 W. Seltice Way. The Post Falls office is dedicated to aspects of testing that involve welding, including inspecting welds and testing welded materials, as well as certifying fabrication welders who show they meet standards recognized by the American Welding Society and the Washington Association of Building Officials.

The company hired Travis Learn in early 2012 to set up a fabrication welding curriculum, and has since been recognized as a proprietary school by the states of Washington and Idaho.

The proprietary school designation means the welders can earn qualifications for specific skills rather than broader three-academic-quarter certification programs or two-year associate degrees offered through some vocation programs, such as Spokane Community College.

"We fill a niche for people who want to be welders but don't want to spend two years in school," Keith says.

"Our instructors and inspectors have years of industry experience," Keith says.

All students are given the opportunity to take the certification tests at the end of their respective courses.

"Once certified, they can go directly to work," he says.

People who've gone through the course work at various manufacturing plants and fabrication shops throughout the Inland Northwest, such as Ground Force Manufacturing LLC, in Post Falls, and Schuon Manufacturing Co., in Coeur d'Alene.

At least two students have used their newly certified welding skills to land jobs in North Dakota, where pipe welders are in high demand by the oil and gas industry.

Typical pay for welders with basic skills starts at $14 to $16 an hour in the Spokane area and $12 an hour in North Idaho, Keith says, adding that certified pipe-welders usually draw higher pay.

Joe Fitzgerald, 21, Hayden, who is taking the pipe-welding course, says he plans to make welding his career.

"I'll be able to work in pipelines," he says. "There are thousands of jobs for that right now."

AllWest's Post Falls shop area has four welding booths, and has so far instructed 33 students. It currently has about a month-long waiting list.

Keith says the company plans to expand the welding area to include 10 fully equipped welding booths as the backlog of students grows.

"We are anticipating expanding it into a bigger component," he says. "In a perfect world, I would like to have it bigger by January."

AllWest has four other offices, including its flagship office at 690 W. Capstone Court, in Hayden, and satellite offices at 12928 E. Indiana, in Spokane Valley, and an office in Lewiston, Idaho. The company recently opened an office in Meridian, Idaho. The company has about 50 employees, including six engineers and four engineers in training, and four geologists, Keith says.

Active projects AllWest is involved in include the 127,000-square-foot Providence Medical Park-Spokane Valley, a four-story medical office building south of Kootenai Medical Center, in Coeur d'Alene, and several new bridges under construction for the Idaho Department of Transportation this year.