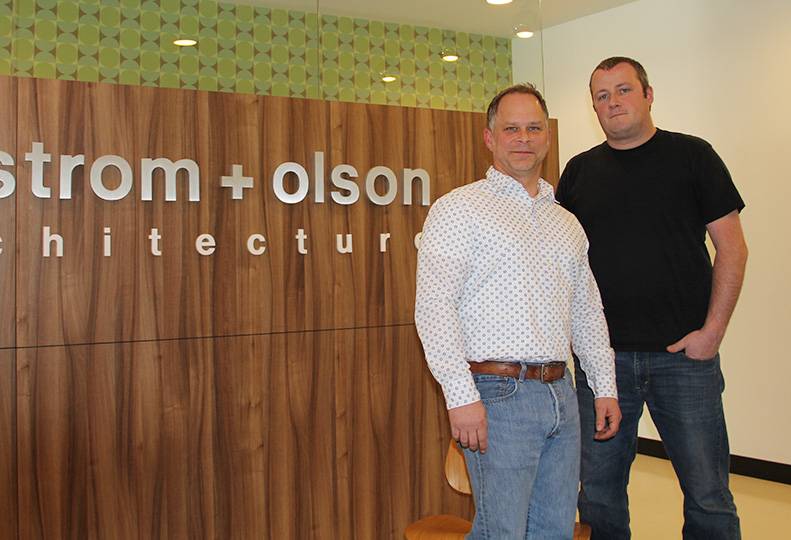 -—Lucas Thayer
Nystrom+Olson Architecture principals Sam Nystrom, left, and Chris Olson say the firm is working with some big clients and currently is in a hiring mode.

Nystrom+Olson Architecture, a nine-year-old Spokane firm, says it anticipates steady growth during the next several years following a down period in the real estate market six years ago, as it focuses on several high profile projects downtown as well as an array of multifamily developments and adaptive reuse projects for several existing buildings.

After the real estate market collapsed in 2008, the company scaled down its workforce by two architects, but it has since replaced those employees and looks forward to sustained growth, says K. Sam Nystrom, who co-owns and co-founded the firm with Chris Olson after the two of them left Denny Christenson & Associates, of Spokane.

The company now employs a total of 10 people, including the five architects.

“We are in a hiring mode right now,” Nystrom says. “We’re working with some very big clients, but the end result is that these are developers that are moving forward at a sustainable rate.”

The firm moved over a year ago to its location in part of the Numerica Building, formerly the First National Bank Building, at 505 W. Riverside. Both Nystrom and Olson have ownership interests in the two-story, 24,000-square-foot building as part of an investment group led by Spokane sports team owner and real estate investor Bobby Brett. The group, called 1953 Box LLC, also has an interest in the former Huppin’s Hi-Fi, Photo & Video building at 421 W. Main and the adjoining former musical instrument retail Dutch’s Inc. building  at 415 W. Main. All three are undergoing renovations, with Nystrom+Olson listed as the designer on those projects.

The firm attributes some of its success to its clean, modern design style, “something that you don’t see a lot of in Spokane,” Olson says.

“We’re not afraid to show an option that’s not a standard option,” he adds.

The firm added several high profile design projects to its portfolio in the past several years, including a redesign of the three-story, 35,000-square-foot historic Bennett Block complex at the northeast corner of Main Avenue and Howard Street downtown. The design called for new, eco-friendly heating and cooling systems, more efficient roofing and windows, better insulation, and environmentally safe interior building materials. Many of the Bennett Block’s existing materials were recycled for reuse, Nystrom says.

“Recycling a building—what’s more sustainable than that?” Nystrom says.

Nystrom+Olson also currently is working with both the Wolff Co., an Arizona real estate development group with Spokane roots, and the Inland Group PS, of Spokane Valley, on several apartment projects, including the Beach House Apartments, a 216-unit apartment complex in Spokane Valley.

Nystrom+Olson designed several of Spokane Teachers Credit Union’s branches, including its branch on Moran Prairie, an envisioned branch in Coeur d’Alene, and its offices in the Hutton Building downtown.

Nystrom worked in Minneapolis and Seattle briefly before moving to Spokane in 1990. Olson worked for Washington Water Power Co., now Avista Corp., and then worked in an architectural office before joining Denny Christenson & Associates, where the two principals first met.