New hotel’s rooms will take time for market to absorb 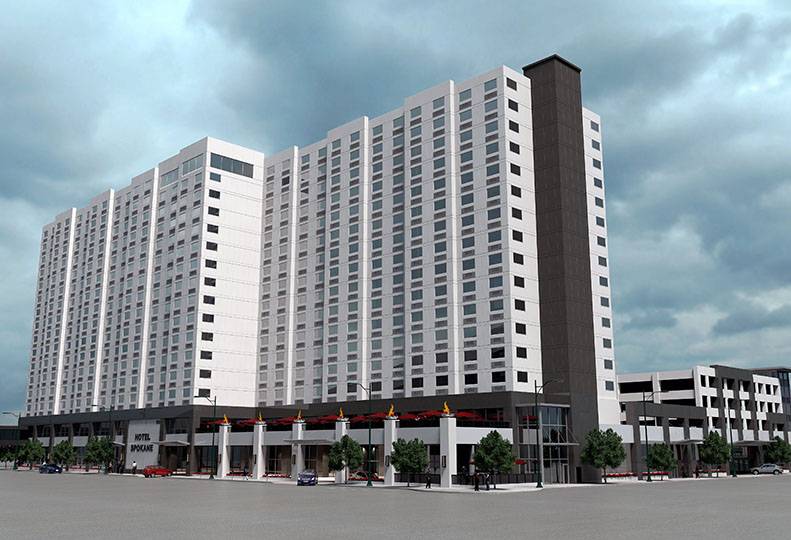 -—Worthy Enterprises LLC
The 715-room convention center hotel being built in downtown Spokane is expected to be completed in the summer of 2015.

The Spokane-area hospitality market could take up to five years to absorb all of the new rooms that the new convention center hotel will add to it when the 715-room establishment opens downtown in the summer of 2015, lodging and tourism promoters says.

In the long run, though, the private hotel development coupled with the voter-approved improvements to the nearby Spokane Convention Center will accommodate more and bigger groups than the center can handle now, eventually attracting business growth, they say.

The $135 million convention center hotel project, which Spokane hoteliers Walt and Karen Worthy are developing on what’s called the South Block, will increase the downtown core hotel room inventory by nearly 30 percent, according to Visit Spokane.

“The short-term concern is that new inventory is coming on very quickly,” says Keith Backsen, vice president of marketing and sales for Visit Spokane, who adds, “If you look at the long term, it definitely will benefit the community.”

Visit Spokane is a destination promoter that seeks to boost Spokane-area economic development through group sales and tourism marketing. It’s funded mostly through lodging and tourism-related taxes administered by the Spokane Public Facilities District and other entities in Spokane County.

A separately planned skywalk over Spokane Falls Boulevard will connect the hotel and the Convention Center.

Meantime, the Public Facilities District is expanding the Spokane Convention Center in a $41 million project that eventually will drive the demand for the larger connected hotel, in addition to the 374-room DoubleTree by Hilton Spokane City Center hotel, which is on the convention center campus.

Voters approved a funding measure in spring 2012 for the convention center expansion.

“When we went to voters, we talked about this expansion allowing us to go to a new set of customers,” Backsen says.

That was before the Worthys announced their intentions to develop privately the convention center hotel project.

“The additional hotel rooms will continue to broaden the pool of potential customers,” Backsen says. “Our meeting planners have said over and over that they wish we had more rooms connected to the convention center. Having two connected hotels will be really great. It adds to the mix of hotels in close proximity to the convention center. It will give us a selling advantage.”

That advantage might not be visible here for a few years, though, he says.

Backsen says Visit Spokane is in some phase of solicitation with roughly 30 groups, although he declines to name them because the organization still is competing for business commitments.

“We’re going to need (the hotel) open for the groups we have as tentative to actually convert to committed,” he says.

Even smaller downtown hotels that don’t regularly book large groups likely will see a dip in occupancy when the convention center hotel opens, says Pam Alfaro, general manager at the Courtyard by Marriott Spokane, at 401 N. Riverpoint Blvd., near the Convention Center, which has 149 rooms.

“Next year could be a struggle,” Alfaro says, adding “I don’t think it’s going to be devastating.”

A primary market for the Courtyard by Marriott is short-stay business travelers.

“I do think that with (more than 700) rooms entering the marketplace, there’s going to be a shift in occupancy,” says Alfaro, who’s on the board of the Spokane Hotel Motel Association.

She says association members are hopeful that the new hotel and convention center improvements eventually will attract more business.

“I’m more interested in making sure we can fill the convention center so we can all sell rooms,” Alfaro says.

“For us, it’s going to have a big impact on our inventory—probably for the first five years, we may see overall occupancy go down a bit,” Jensen says.

The convention center expansion, which was the catalyst for the hotel project, eventually will benefit all Spokane-area hotels, he asserts.

“Hopefully, it’s going to open up new markets and attract more and bigger conventions that will lift everybody higher,” he says. “Spokane will be a better place because we’ll have more business coming to it.”

He says the convention center expansion by itself will create demand for the connected rooms that the Worthys’ project will provide.

“We’ve been comparing our scenario to the Hyatt in Bellevue,” Jensen says, noting that facility has enough rooms and meeting space to “self-contain” larger conventions than Spokane currently can with its contiguous facilities.

“This allows us to be much more competitive,” he says, of the combined convention center expansion and the Worthys’ connected hotel project.

“We’ve already sold more than $1 million in business at the new hotel,” Jensen says. Several more groups also are looking at the hotel. “We’re holding space for them all the way into 2020,” he says.

The convention center expansion is scheduled to be completed in December. Jensen says the hotel will open the following summer.

“July 1, 2015, is our tentative opening date,” Jensen says. “It may be sooner. Construction is going very well.”

Jensen says he met with one meeting planner last week who’s looking for convention space and for a multiday convention that would require 1,300 total rooms with a peak night of 300 rooms in October 2015.

“That’s pretty short term,” he says, adding, the planner was quite impressed with progress of construction during her planning meeting here.

“There’s quite a bit of business waiting for something like this to come along, and a lot of groups don’t know about us yet.”

Backsen says the new hotel, coupled with the convention center expansion, will enable Spokane to compete for convention business with some larger cities, such as Portland.

It also will give Spokane a slight edge in terms of space and rooms as it competes with similar-sized cities such as Sacramento, Calif., and Albuquerque, N.M., Backsen says.

Spokane also will be able to host multiple events simultaneously, he says.

While most convention planners are looking to book for events farther out than the planned 2015 convention center hotel opening, the construction currently under way is only helping marketing efforts for future bookings, Backsen says.

Many convention planners want to see progress on the projects before they consider booking an event in Spokane, he says.

“It’s a nice thing now to have something come out of the ground,” Backsen says. “We can show people it’s actually moving forward.”

Conventions and events bring a significant amount of dollars to the Spokane area.

Spokane is hosting the tournament again this month.