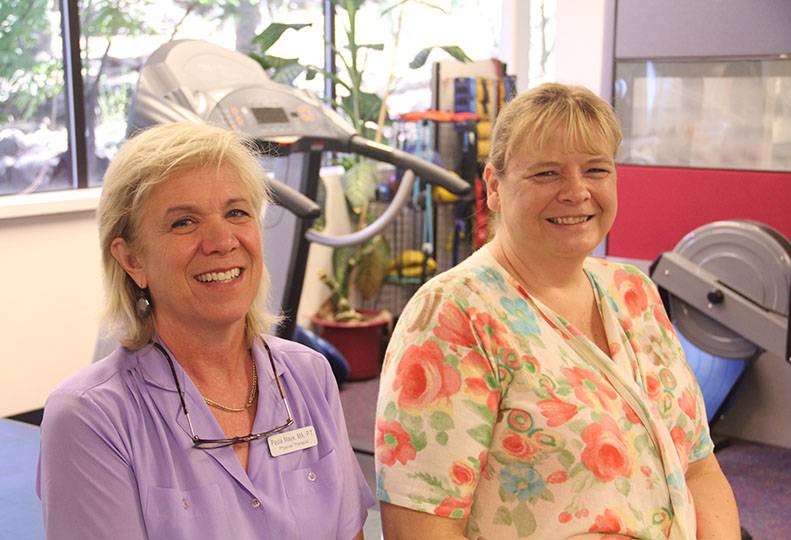 Paula Dillon Mays, a longtime physical therapist and clinic owner here, says she's seen treatment and the role of the PT change over the years, markedly in women's health.

Along with its main office at 1403 S. Grand Boulevard, on Spokane's South Hill, her practice has offices at 3017 E. Francis, on the North Side; 1315 N Division, north of downtown; 213 S. University, in Spokane Valley; and 9725 W. Sunset Highway, in Airway Heights. Mays says a sixth site located north of Spokane is used exclusively for hippotherapy—a form of physical therapy that takes place on horseback and typically is used for patients with neurological disabilities.

She says women's health-focused physical therapy exercises have progressed during the last 10 years. Specifically with incontinence issues, Mays says the success rate has increased over that period to 80 percent, up from 30 percent.

"They used to just show someone how to do a kegel at a doctor's office," Mays says. Kegels are pelvic floor exercises that can be used to help strengthen pelvic muscles and alleviate incontinence and other problems.

To her, the role of a physical therapist has grown to include being an educator, not only by answering pre-operation questions about recovery, but also by giving patients the tools they need to continue the recovery process outside of the clinics.

"Relationship is so important," Mays says. "We try to keep the same patients with the same therapists."

The clinics employ a total of about 45 people, she says, 13 of whom are physical therapists. The rest are a combination of physical therapy assistants and support staff.

At her physical therapy clinics here, she says women's health-related treatments and programs have been growing. For example, she sees patients after breast cancer operations, such as lumpectomies, where a portion of a breast is removed, and mastectomies, where the entire breast is removed. Stretching and strengthening of muscles in the breast and axillary, or armpit, areas of the body can help patients with range-of-motion problems, she says.

During the breast cancer operation, women often have lymph nodes removed in the upper part of the breast and near the armpit. A massage method known as manual lymphatic drainage helps move fluid away from those areas and toward other lymph nodes, which play a role in the immune system by acting as filter for toxins in the body. The massage helps lymphedema, which is swelling caused by a buildup of fluid, from occurring after surgery, she says, and also can be used as a treatment for lymphedema in other areas of the body.

Lymphedema can occur in both men and women, and typically affects the extremities, but also can occur in the breast and abdomen. Physical therapists at the clinics are trained in how to do manual lymphatic drainage, and proper bandaging of the area, which can include pressure bandages or even wearable massage garments that can wrap around a leg or arm.

"The goal is you teach the patient this so they can do this on their own," Mays says.

Physical therapy assistant Kelly Sharkey says the clinics also help women both pre- and post-pregnancy, particularly after pregnancy when a woman is going about her daily activities, such as lifting a baby's car seat. Sharkey says post-pregnancy, it's common to see women with problems such as diastasis, which is a separation of the abdominal muscles, and sacroiliac pain associated with the joints at the base of the spine.

Sharkey has been employed with the clinics for seven years, and has been a physical therapy assistant for 20 years, she says. She also teaches a weekly light exercise class for some patients who may not be comfortable going to the gym, or aren't yet ready to do so.

"There's enough knowledge that if they go into a gym they won't hurt themselves," Sharkey says of the classes.

Mays says the clinics also see some patients with fibromyalgia, a chronic pain condition affecting many women that can be accompanied by other symptoms such as fatigue, and joint stiffness.

Sharkey says, "A lot of them are afraid to move because it hurts to move."

Some physical therapy clinics choose not to see fibromyalgia patients because their chronic pain can be difficult to treat, Mays says, but she claims her clinics have had some success in providing treatments that help patients manage their pain.

She says incontinence, a common problem for aging women, can be eased with pelvic floor exercises. She says physical therapists use an electromyography test to determine whether pelvic muscles are too loose or too tight. Electrodes are placed on the pelvis and patients are asked to tighten up their pelvic muscles.

Stress incontinence is triggered by actions such as coughing or laughing, she says. Another form, called urge incontinence, is caused by muscle contractions even when the bladder isn't full.

"People think as you get older you just have to put up with it, and it's just not so," Mays says.

Exercises such as kegels and those using balls and elastic bands to create resistance when separating or pushing together the knees can strengthen pelvic floor muscles and help stop or alleviate incontinence, she says.

Mays says she doesn't have any immediate plans for expansion at her chain of clinics, adding that she's waiting to see how the Affordable Care Act affects physical therapists.

"If you really don't know where you're going, it's hard to have an idea," Mays says. "We're just floating by."