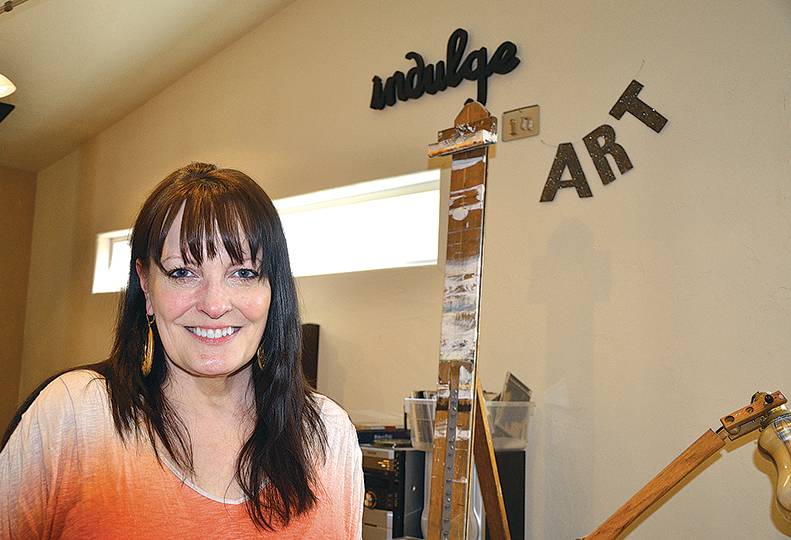 Kathleen Cavender, 61, a part-time jazz singer and full-time artist in Spokane, had been married to her husband Mike for nearly 30 years when he was diagnosed with idiopathic pulmonary fibrosis, an autoimmune disease that turns the lungs to scar tissue.

Before he got sick, Mike Cavender handled all the money and made all financial decisions for the couple. He bought their house on the South Hill, filled it with antiques, and had control over just about everything—even though she was a successful and increasingly well-known artist.

She knew very little about their finances, much less whether or not they had a plan for retirement.

Cavender is not alone. For many reasons, women often face greater risk when confronting financial security and ultimately, planning for retirement.

In some ways, Cavender was lucky.

“He put me in a house and gave me a lifestyle, and I didn’t have to worry about things,” Cavender says. She says everything changed when he got sick, and she had to play catch up quickly, especially when it came to money.

“I knew nothing about finances until he got sick. He would not even let me drive a car,” she says. “Later on, when he asked me how I was doing with (financial concerns), I started crying and said I was scared.”

After a lung transplant and chemotherapy treatments, her husband enjoyed a brief remission. However, the cancer returned and his final battle lasted less than a month. He died in January 2013.

During the period when her husband became so sick he couldn’t work, medical bills began piling up and the couple got so far behind in their mortgage, the bank almost foreclosed.

It was then that Cavender says she had to learn how to talk to bankers, modify the mortgage, pay bills, and generally take over responsibility for the couple’s finances. During his remission, her husband laid all the groundwork to allow her to do that by providing a “uber-organized” listing of their assets, liabilities—even passwords for their accounts. She thinks he also signed her up for widow’s benefits from the Social Security Administration although she didn’t know anything about the program.

Saving for retirement these days can be a challenge for anyone, but women are often at even greater risk when it comes to achieving a secure retirement. Longer life expectancy, less pay and taking care of family all contribute to increased anxiety about someday turning into a bag lady.

The Transamerica Center for Retirement Studies, a private, nonprofit foundation based in San Francisco, has conducted studies about emerging trends surrounding retirement security in the United States since 1998. It’s latest study released in late March says contributing factors that put women at greater risk of not meeting their retirement needs include the following

•Women are more likely than men to be single parents.

•About 61 percent of baby boomer women expect to work after 65 or simply don’t plan to retire.

Shortly after her husband’s death, Cavender says she was surprised by a call from the SSA asking her where to deposit her benefit check, which she says was a godsend. Today, with three grown children and 11 grandchildren, she plans to sell her house and make some other financial decisions based on advice from a financial planner, which will see her through to retirement and beyond.

Cavender is one of about 5 million widows and widowers receiving monthly Social Security benefits based on their deceased spouse’s earnings. And, for many of those survivors, particularly older women, those benefits are how they survive.

Sarah Rieger, owner of Fulcrum Financial Group, which is located on the South Hill and specializes in retirement-related matters, says women are “wired” to be naturally good at financial planning since they, for the most part, are “gatherers and are good at negotiating data points. “But, many times, women give up the financial part to their spouse, and they don’t plug in. The result is they end up making pretty big mistakes. When they give that up in a relationship, that’s a mistake.”

Rieger encourages clients who are partnered to make a date at least twice a year to talk about goals, financial and otherwise.

“They should talk about their dreams, not just about retiring or kids or education, and talk about short-term goals as well,” she says. She recommends people each list their goals, and share the list on their date. Then they can work on putting together a united goal.

“It’s magical once people are united in their efforts,” she says.

The U.S. Department of Labor estimates that of the 62 million wage and salaried women between ages 21 and 64 who work, only 45 percent participated in a retirement plan in 2010.

One of Rieger’s clients, a widow in her 70s who asked not to be identified by name, was among those women who didn’t participate in retirement planning decisions. The 72-year-old lost her husband to heart failure several years ago and was fearful about managing the couple’s investments. She says she didn’t know much about the couple’s retirement planning. She didn’t work while raising the couple’s three children, and the kids are all grown now with children of their own.

“I knew about some of the finances,” she says, “but he had done all the investing, and I didn’t feel qualified to do that. I was fearful. I didn’t know who or what to trust and turning your money over to someone else is scary,” she says. “Sarah listened and went very slowly with me and that was important to me.”

Rieger says the woman is much more confident about her finances today and relieved to know that she understands the financial decisions she’s made related to her  retirement savings.

While the income gap is slowly shrinking, U.S. Census Bureau data show the median earnings of men who worked full time in 2012 was $49,398 versus $37,791 for women. Thus, women have less to contribute to a tax-deferred retirement plan.

On the bright side, Rieger says there are a lot of easy solutions and systematic processes that can be put into place.

“You have to start prioritizing and putting aside money pre-tax; hopefully an employer has plans for people and they are eligible for either IRAs or Roth IRA,” she adds. Bottom line, Rieger says women need to be aware of the basics: where income comes from and what their expenses are. “Have a good understanding of assets and what you owe. Know what your net worth is and what your cash flow is. And if you have credit card debt, have a plan to get rid of it,” she says.

She says people tend to not understand the impacts of credit card debt.

“If you have credit card debt, you’re spending thousands of dollars for the privilege of continuing to owe this money. It’s smarter to pay off the debt and treat yourself as a bank.”

Women also need to have separate accounts in their own name, Rieger contends.  If women get divorced or their spouse dies, they will need access to all the financial accounts, she says.

“Money can be about emotional challenges. It can be used as a weapon. If a husband dies suddenly and their name is not on the accounts, it can take a lot to get (access). There are a couple ways to do that. You can have joint accounts and a TOD transfer on death designation.”

Transfer on death (TOD) registration, she says, enables a spouse or partner to pass securities they own directly to another person or entity (a TOD beneficiary) upon death without having to go through probate.

By setting up an account or having securities registered this way, the executor or administrator of the estate won’t have to take any action to ensure that securities transfer to whoever is designated. However, TOD beneficiaries must take steps to reregister the securities in their names. This typically involves sending a copy of the death certificate and an application for reregistration to the transfer agent.

Billie Moreland, 72, has been retired since July 2013 and partly relies on her husband’s retirement but has had her own investment portfolio since 1985 when she wasn’t married, and she continues to do so.

“I was probably influenced to see a financial planner as early as I did through business networking,” Moreland says.

She was chef owner of Moreland’s Restaurant for 20 years and says she started thinking about retirement when she was in her early 60s. These days, she is a volunteer mentor for SCORE, a nonprofit that provides free counseling to small-business owners. She married her current husband, a computer science professor, when she was about 40 years old.

“We’ve worked hard at this,” Moreland says. “Our financial planner has run our accounts out to age 120 to be sure that we’re going to be OK barring anything truly catastrophic. We have health insurance, supplemental health insurance, and we spend a lot out-of-pocket on health care. And we have life insurance.”

Moreland says she and her husband have carefully managed their money together, and his retirement as a professor also will help them continue to live the lifestyle they want.

“They take good care of professors,” she says. “Because everyone knows they are absent-minded.”