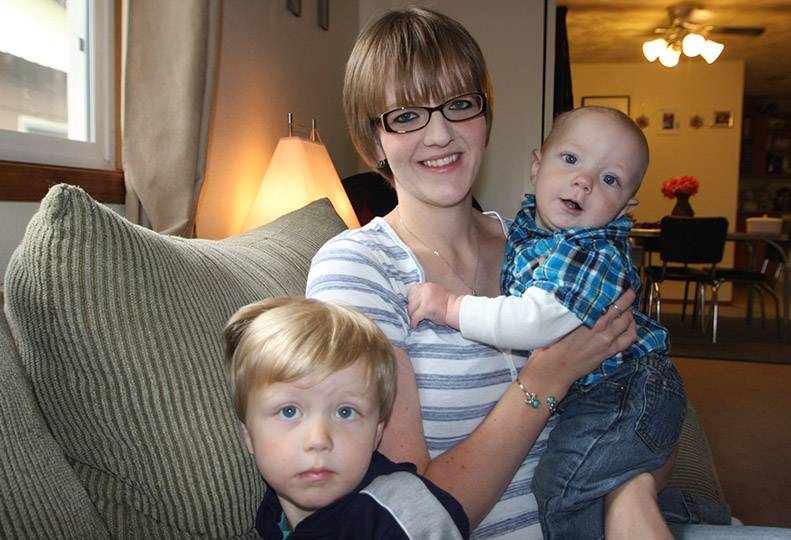 After her second son was born nearly a year ago, Spokane resident Elbe Lamoureux recalls a postpartum depression with panic attacks and of greater severity than what she'd experienced following the birth of her first child.

After about two months of struggling, the mom of two young children started attending a postpartum depression support group launched last fall by Bloom Spokane, a nonprofit that provides childbirth resources. The group also provides a list of Spokane-area licensed mental health therapists, and Lamoureux began seeing one of those professionals.

Now, with her youngest nearing his first birthday, she blogs about her experiences and encourages other new moms to seek attention earlier than she did. Lamoureux says additional steps that have helped her included starting a mom's social group, doing light exercise, and eating healthy foods.

"The support group was really helpful," Lamoureux says. "I could sit and talk about what I was going through and know I wasn't just crazy, but that others were going through the same thing."

She adds, "I think there are still struggles, but my husband has been incredibly helpful; he went to the support group with me. I've felt I'm coming out the other side of it."

Courtney Clark, a member of Bloom Spokane's board of directors who doesn't work as a health care professional, helped organize Bloom Spokane's first postpartum depression support group that is offered as a free service.

"We had held a professional forum about postpartum concerns in Spokane," Clark says. "We realized that while there are a lot of therapists in Spokane trained in postpartum mood disorders who can help women, there were no free postpartum depression support groups here."

Between 9 percent and 16 percent of U.S. women who give birth experience postpartum depression, says the American Psychological Association, a scientific and professional psychology organization. It describes the disorder as a type of clinical depression that mostly affects women, but also sometimes men. Unlike baby blues, it doesn't fade after the first few weeks.

Symptoms can include strong feelings of depression and anger, doubts about ability to care for a newborn, helplessness or guilt that increase and interfere with normal function, inability to find pleasure in normally enjoyable activity, anxiety or panic attacks, lack of interest, and fears of harming the baby.

Having gone through it herself, Lamoureux says she thinks the most important step for others dealing with postpartum depression is to ask for help.

"I would recommend that they talk to a doctor, or a best friend ... to reach out is the most important part," she says. "I think it's incredibly common. It's just hard sometimes to admit because having a baby is a joyous time. To feel anything other than that joy, it's hard to face."

Along with Bloom Spokane, another community resource here is Catholic Charities Spokane, which provides free educational and support programs for parents of young children, from pregnancy to age 3, through its childbirth and parenting assistance (CAPA) program.

"It's free; the only thing we charge for is couple's counseling, which is on a sliding scale based on income," she says. "It can be as little as $4 a session."

Schafer says what is called baby blues lasts three days to 10 days. It's typical for shifting hormones and sleep deprivation to prompt crying, anger, sadness, confusion, and irritability, she says.

However, postpartum depression is clinical depression that equates to "feeling depressed pretty much all the time," Schafer says.

"Beyond new parenting feelings of adjustments, there's constant worrying, doubting yourself, feeling of worthlessness, guilt for no reason or for some strange reason, not feeling connected to your baby, and recurrent thoughts of suicide or death," she says.

Some women experience another level of the disorder called postpartum depression with anxiety.

"There is a lot of fear and anxiety about being able to care for the baby, and maybe some irrational extreme fear about harming the baby, kind of like OCD," Schafer says. "They want to control everything in life, and that's not possible, so there's heightened anxiety when you feel out of control. It happens a lot, and it's rooted in that anxiety and fear."

She adds that in some cases antidepressants may be warranted. If a mom begins taking antidepressants, though, it's recommended that she stop breast feeding.

In rare instances, new mothers will develop a severe mental illness called postpartum psychosis, which can include hallucinations, delusions, and a strong desire to hurt the baby or sometimes believing the baby is dangerous.

"We're always watching for postpartum psychosis, which is rare," Schafer says. "It needs to be referred to a medical professional, and it sometimes requires hospitalization."

People suffering from any postpartum depression are encouraged to seek individual counseling, to reach out for family or friend support, and to consider participating in parent support groups, Schafer says.

"Isolation increases depression," she adds. "A lot of our parents don't have a lot of family support, and they have this new baby who maybe cries a lot. The more the mom hunkers down and isolates herself, the deeper her depression can become, and the riskier her medical condition."

Some of the tools to combat postpartum depression offered in counseling include the encouragement of healthy eating, getting out and walking, self-care, journaling, and talking with friends, she says.

Schafer says the exact cause of postpartum depression isn't known, although certain risk factors include a history of mental illness, previous depression, relationship problems, and feeling isolated or the loss of self after giving birth. Helping people recover is the ultimate goal, she adds.

"I was really excited to hear about the group at Bloom, and we refer people we feel would benefit from it," Schafer says. "We're also hoping to start our own postpartum group, perhaps in the fall."

Bloom Spokane sent a volunteer, Jen Kennedy, to Seattle to train as a facilitator for its first support group. Kennedy, who suffered from the disorder after her children were born, says it's become clear since starting the first group that more session locations are needed.

"Last month, we started the North Side group because we needed to have more accessible places for people to meet," Kennedy says. "We've had people from Airway Heights and all the way from Liberty Lake. My hope is to have a group in each major neighborhood area of Spokane."

She says an obstacle for some women is being able to afford to see a doctor or therapist, perhaps because they don't have health insurance.

"We have a whole list of therapists and referrals, and we make sure they're aware of the Vanessa Behan Crisis Nursery," Kennedy says.

That nursery, located on the lower South Hill, offers as a part of its services a safe place for parents to bring their children if they're having difficulty providing safe, nurturing care.

Other women face the obstacle of embarrassment, Kennedy says. "It's embarrassing to go admit that you can't bond with your baby; that you're having intrusive thoughts about harming your baby. Of course, you don't do anything, but you think, 'How can I have these thoughts? I love my baby.'"

She adds, "It's a safe place to talk about what's really going on at home. There's no, 'You should be doing that.' It's more of, 'This kind of works for me.'"

Clark also says Bloom group members are encouraged to talk in a confidential setting, without criticism.

"I know what helps women is talking about it with other women, especially women who have been there. It's about realizing that you're not alone," she adds.

The Bloom Spokane support group usually has five or six women and some dads attend, Clark says. A facilitator and a trained therapist guide discussion, she says, and Bloom Spokane currently is seeking another therapist who can volunteer time at meetings, she says.

"Some women describe feeling really isolated, so later they'll form a walking group or get together for a play date with the kids," Clark says. "We have a lot of them getting together later to offer extra support."