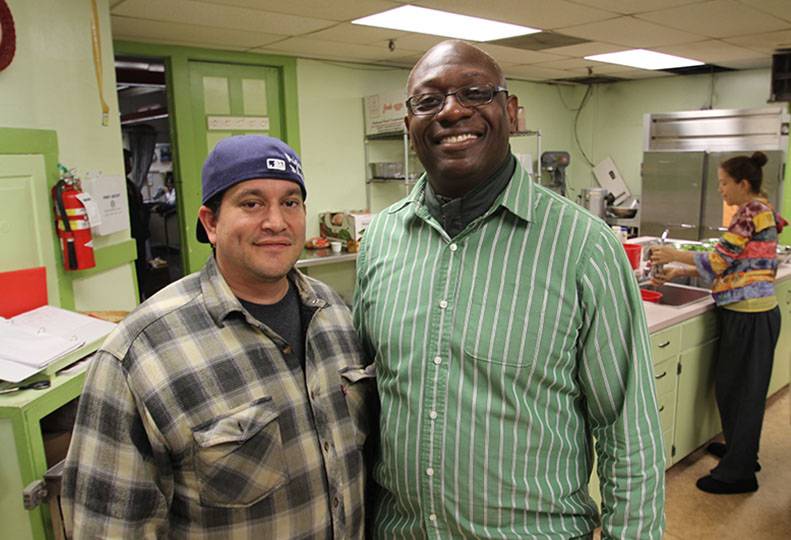 The company, which started in May and has a staff of five people, provides short-term jobs and job training among other support services to people who are homeless, and also to individuals recently released from prison or jail.

Stewart Wilson, a co-owner in the business and chief operating officer, says that since late May, a couple dozen people have earned money working in jobs offered by Change for the Better, which is based in the basement of the church, located at 518 W. Third.

"We're making them work for what help they receive; we don't give anything for free," Wilson says. The participants are asked to make a six-month commitment to Change for the Better, he adds.

One short-term job opportunity the company has secured, Wilson says, is a contract with Goodwill Industries of the Inland Northwest to prepare donated toys so they can be sold in Goodwill's stores. Wilson says the contract enables Change for the Better to pay people according to what he calls piece work to bag toys for sale, with the work done in the church's basement where food and shelter also are provided.

People often use the initial money they earn from such work to pay a fee to the state Department of Licensing to replace lost or stolen state identification cards, which they must have to be hired in permanent jobs, Wilson adds.

"One of the key things we find that is a barrier for people is not having ID cards," Wilson says. "A lot of times what happens is someone gets out of jail, and all of their stuff is in one backpack. That bag gets stolen, and it has the person's ID."

Wilson adds, "We take them down to the Department of Licensing, and we ensure they use the money to buy the ID. We call it asset building."

Change for the Better CEO Loli Kalua, who is majority owner, adds that although the new enterprise is a for-profit venture, it's designed as what she calls a social-purpose corporation, meaning that any profits gained will be invested back into Change for the Better and the church.

"We help people go from dependence and survival mode to being self-sufficient," Kalua says.

Because the owners of Change for the Better expect it will take several years for the company to become financially self-sufficient, Kalua says the entity is launching a fundraising campaign this fall with a goal to reach about $275,000 by June.

The effort includes fundraising events, grant requests, and donations to the church. Kalua says people can make tax-deductible charitable contributions if donations are given to Central United Methodist Church as a nonprofit entity, but then donors can note what contributions are meant to support Change for the Better.

"The church contracts with, or hires, Change for the Better to run its outreach program for the homeless," Kalua adds. "People can send in donations to the church and designate it's for Change for the Better," which would provide billable services, such as employing people to do some janitorial work at the church for the donated amounts.

Kalua is an owner along with Wilson and the church's pastor, Ian Robertson. She adds that because of her 51 percent share of ownership in the enterprise, "it qualifies us as a minority-owned business because I'm Hawaiian. And we're in a HUBZone."

The term HUBZone stands for historically underutilized business zone, a program launched during the Clinton administration to give preference on federal contracts to small companies that are located in disadvantaged areas. Kalua says she hasn't yet determined what federal contracts Change for the Better might seek, because she currently is focused on securing grants to help fund the entity.

Kalua adds that operating Change for the Better as a minority-owned business is expected to hold certain advantages to help homeless people in ways a nonprofit couldn't. One approach is to secure contracts from businesses, nonprofits, and governmental entities to provide services, such as envelope stuffing, which homeless people could do as piece work from the church's basement.

Kalua says Change for the Better also will sponsor spin-off businesses started by participants in the operation, and then their enterprises can hire people who come to the church seeking services.

"I can go for a contract that a felon can never go for," Kalua adds. "I can obtain the contract, and they can provide the product for that contract through their own businesses. It gives them a higher success rate and a better chance to have residual, steady income and workload."

Many of the people who become homeless also have never learned to run a business, she says, so Change for the Better can help sponsor them until they gain marketing and other helpful skills. Some people also need to make money so they can pay off court fines, she adds, as they become self-sufficient.

Supporting those businesses is part of the goal of the $275,000 fundraising effort, she says.

"That would make us fully funded," she says. "It allows us the seed money to support industries of people to start their own businesses. Many of them don't have good credit. Part of what they will do is job training in their businesses. They also will tithe 10 percent back."

Change for the Better employee Martie Taylor is launching a business he calls Mecabs, which he says stands for "make every city attractive, beautiful, and safe." Wilson says Taylor plans to hire participants in Change for the Better to provide services such as graffiti removal, neighborhood cleanup, and outdoor safety patrols, likely in downtown areas near Interstate 90.

Another employee, Robert Miller, has started a business that produces leather bracelets that read "Change Spokane" to sell at craft fairs and markets. Miller is teaching the craft to others involved in Change for the Better, which is paying people by the piece to make the bracelets.

"There will be a good six different companies that will be starting here soon," Wilson says, based on ideas of other participants.

He says Change for the Better has partnered with Eastern Washington University for a research project that will track people involved with the company. EWU students are at the church a couple of days a week to help people complete a survey with 125 questions, he says.

"It's for a baseline to determine what an individual's needs are," Wilson says. "For EWU, it will be part of a database for research. It will give us benchmarks to determine where we're being successful helping people, with follow-ups after one month, three months, and six months."

The participants also are screened for whether they have drug and alcohol addictions, or mental health issues. Change for the Better brings in representatives from different Spokane-based community agencies to provide services and talk to people while they're at the church, Kalua adds.

She says examples of agencies that provide services regularly at the church include the Washington state Department of Social and Health Services, Frontier Behavioral Health, and Veteran Services.

"We don't refer anyone to go somewhere else," Kalua says. "We bring everyone in-house."