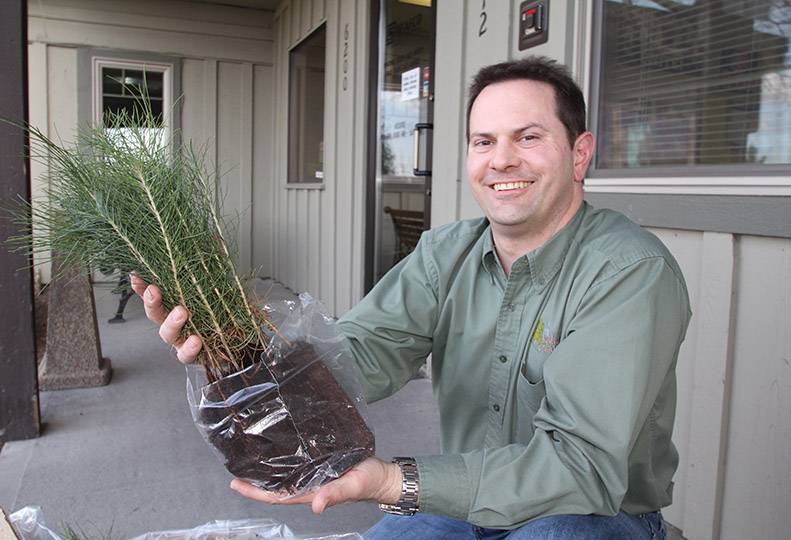 -—Staff photo by Treva Lind
Kevin Cash, executive director of Spokane Ponderosa, says the group has bought 5,000-some small trees since starting. The group is kicking off a wider distribution this spring.

Spokane Ponderosa, an organization that strives to restore greater numbers of the city's most dominant native tree, is kicking off a wider distribution of the evergreen seedlings this spring for volunteer groups to plant.

Kevin Cash, full-time executive director of Spokane Ponderosa, says that so far, the group has bought about $2,000 worth of seedlings—some 5,000 small trees at an average cost of about 40 cents apiece.

For one of its first large distributions, the organization supplied 1,000 ponderosa seedlings that members of Boy Scout Troop 430 planted April 27 near a completed portion of the North Spokane Corridor, also known as the north-south freeway, just north of Francis. The nonprofit purchased those 1,000 seedlings from Plants of the Wild, a Tekoa, Wash.-based business.

Last spring, the group supplied 3,600 ponderosa pine and about 400 Douglas fir seedlings that were planted on an undeveloped 6-acre parcel of land in Spokane Valley for a revitalization project.

"We wanted to test what would happen if the seedlings didn't get the extra water, and a good 80 percent of the ponderosa seedlings survived with no supplemental water, but we lost about all of the Douglas fir," Cash says.

Spokane Ponderosa's goal is to revitalize and preserve the area's abundance of tall pines that once covered the Spokane area as thick as a forest, he says. In addition to planting more of the native tree, the group also strives to educate developers, design professionals, and others about the environmental and economic benefits of planting ponderosas. A licensed landscape architect, Cash is its only full-time employee and works with a paid, part-time intern.

"Because ponderosa pines are native, once they're established, they can live off the water just from the regular seasons, and they're resistant to most local insects," Cash says. "They don't need all the pesticides or fertilizers that most of the imported tree species need."

"This large-canopy native tree reduces long-term maintenance for your landscaping, and it's the No. 1 absorber of storm water," Cash adds.

Spokane Ponderosa formed a year ago in office space at 6200 E. Main, in Spokane Valley, that was donated by manufacturer Scafco Corp., a corporate sponsor along with Playfair Commerce Park LLC, Cash says. Lawrence Stone, president and CEO of Scafco and head of Playfair Commerce Park, is the organization's benefactor because he supports a resurgence of the native tree to the Spokane area, Cash adds.

Upcoming goals are to complete paperwork for federal 501(c)3 nonprofit status in the next year or two and eventually move the organization to its own office, he says.

"It's a passion of Larry Stone to have Spokane back to its rightful place in the Evergreen State," Cash says. "Our primary native tree is the ponderosa pine. It's the dominant species, and they're numbers have been dropping over the decades. This area was originally a forested area."

Regarding the abundant pine needles that fall to the ground, Cash acknowledges that people do complain about them but adds that many residents here also have trees such as maples and annually bag up their fallen, heavy leaves. Cash adds that pine needles make great mulch covering, or composting material.

"The parks department actually collects the needles and uses them in rose beds and gardens at Manito," he says. "They're slightly acidic, and they can be chipped up or used full length for mulching prior to winter, and just removed in the spring. Many local folks who compost say they're vital for garden composting."

Many city parks, including Coeur d'Alene, Manito, and Audubon parks, host some of the area's most mature ponderosas, he says. From Browne's Addition heading toward the South Hill, the older ponderosas start to thin out because builders over decades past often cleared mature vegetation, he says.

"Pretty much the way that development was up until about the 1980s, a lot of subdivisions would go in, and to be able to meet storm water requirements of the time, they'd have to do substantial grading," Cash says. "It meant clear-cutting and moving dirt around a lot."

He says the city of Spokane is working on low-impact storm water drainage guidelines that encourage use of native vegetation such as ponderosa pines for absorption and landscaping. However, he says some contractors here have been using those practices in recent years and kept mature trees when possible while building projects.

Cash has spent the past year on efforts to organize Spokane Ponderosa and do initial public outreach. He says the organization receives some employment support from Scafco workers, such as for the graphic designs of handout materials.

Also as part of Spokane Ponderosa's outreach, Cash taught a continuing-education class that talked about the advantages of using ponderosa pines by landscape architects in Spokane County.

"Up until now, our work has been more public involvement, meetings with municipalities and local developers and designers," he says. "I can bring a technical background to projects as far as the uses of the trees in urban design."

He adds, "I think local developers and everyone I've talked to want to keep the native vegetation as much as possible. Our city parks still retain a lot of ponderosas. We're hoping to bring that same feel in our neighborhoods and developments."

Ponderosas also are safe to plant along streets, because their root systems grow downward and horizontally and don't break the surface to buckle asphalt or concrete sidewalks, he says.

They also stabilize soil along rivers, he adds.

He says that as part of becoming a licensed landscape architect, the work requires an understanding and stewardship of natural resources. It also means explaining to people what the advantages are of using native plant species in landscaping, and that trees do a lot of work.

"They're absorbing carbon dioxide, improving air quality, and they absorb toxins from the soil and storm water," he says.

Spokane Ponderosa offers a listing on its website of Inland Northwest nurseries that sell ponderosa pines, both on a wholesale basis to contractors and retail sales of the trees to customers.

He says that the organization is interested in working with other volunteer groups and scout troops for planting seedlings.

As far as working with neighborhood groups and developers, Spokane Ponderosa is focused currently on educational outreach and supporting efforts to preserve and landscape with ponderosas, Cash says.

It also can loan out about 22 plug shovels that volunteer groups use for planting the seedlings, he says, and Cash provides training about how to plant and take care of the seedlings.

Ponderosa pine seedlings, which are about 12 to 18 inches tall when planted, need extra watering for about the first two years, he says.

He adds, "You can get a nice-sized, substantial tree fairly soon. If you put in a seedling, you're probably going to have a 4-foot to 6-foot tree within five years, give or take, depending on the amount of watering."

He says that experts in recent years estimated that ponderosa pines in the High Drive Bluff area of Spokane are about 300 years old, but Cash adds that other pines on the South Hill are taller than those.