Some INW complexes never saw a dip in demand 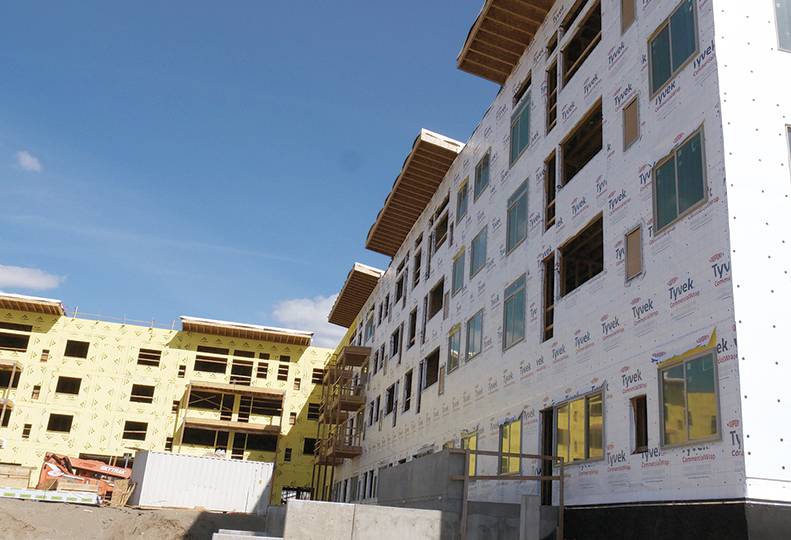 -Erica Bullock
Rockwood Retirement Communities is well underway on its expansion at Rockwood at Whitworth, on Spokane’s North Side.

Occupancy rates at some Spokane retirement complexes are keeping pace with national trends, which are steadily approaching pre-pandemic levels of occupancy, according to retirement home executives here.

Touchmark on the South Hill’s current occupancy rate is about 91%, says Michaela Thompson, executive director at the retirement community. She adds that 93 residents moved into Touchmark last year.

The retirement communities all say that during the pandemic residency decreased. Thompson says Touchmark had a 90.5% occupancy rate in 2020-21, 4.5% below 2019 rates.

Alan Curryer, president and CEO at Rockwood Retirement Communities, declines to disclose the occupancy rates there, but he says residency is at an all-time high at Rockwood South Hill. In the past two years, he says, the waitlist has increased by 38% there.

“At the South Hill campus, the occupancy actually increased during the pandemic,” says Curryer of the facility located at 2903 E. 25th.

The National Investment Center for Seniors Housing & Care’s fourth quarter Actual Rates Report shows that move-ins at both assisted-living and independent-living properties outpaced move-outs for the third consecutive quarter. The report states that senior housing occupancy improved nationally by 0.2 percentage points to 81.2% in January, from a three-month rolling basis. The report also states that from June 2021 to March 2022, occupancy has increased by 2.5 percentage points, although it’s still 6.2 percentage points below a pre-pandemic March 2020 level of 87.4%

At Rockwood Retirement Communities, Curryer says occupancy fluctuated, then dropped due to the delta variant of the coronavirus. Schmick says the senior census at Orchard Crest also declined during initial surges of the pandemic.

At Rockwood, Curryer says, “Our skilled-nursing facility occupancy is a bit lower than other facilities because we can’t admit from outside of our campus. They’ve got to be a resident in independent or assisted living.”

He says the recently completed health care building at Rockwood at Whitworth, which is home to assisted-living, memory care, and skilled-nursing units, filled 30 new units gradually in 12 months, “and now we’re just about full.”

At Orchard Crest, Schmick says occupancy levels are evenly disbursed throughout all levels of care, although demand for assisted care has grown larger than before the pandemic began. Orchard Crest’s recently constructed memory care facility has been open for a year, although the second floor of the two-story building remains unoccupied until staff can be hired to work on the floor, which holds 31 units.

“I’m finding since the pandemic, people are needing more care. They’re needing more help,” she says. “So, we have seen an increase in that versus independent.”

As previously reported by the Journal, in addition to the new memory care facility, Orchard Crest has four triplex buildings, 39 assisted-living units, and 131 independent living apartments at the complex, located at 222 S. Evergreen.

“Memory care is full, and we have 20 homes there. Our assisted living right now is about 90% and we’re expecting four additional folks to join us there this week. And then in our independent living, we have a few apartments we’re working on, so we have about three available,” Thompson says.

Thompson says stable occupancy at Touchmark, at 2929 S. Waterford Drive, during the pandemic didn’t surprise her.

“We were pretty blessed because we didn’t really see that big of a difference,” she says.

However, Curryer says he was a little surprised at the high occupancy rate maintained at both Rockwood facilities despite the pandemic. “I thought people would be more reluctant to make the move, but that’s not been the case,” he says.

He adds that the high occupancy there may be due to the current local seller’s residential real estate market, which has helped make retirement affordable for some people after selling their homes.

Demand at Rockwood has remained strong, Curryer says. Rockwood at Whitworth’s independent-living apartment building has a waitlist, and 94% of units have been presold.

Rockwood’s independent-living apartment building is currently under construction at 101 E. Hawthorne Road, on Spokane’s North Side. Curryer says the building will have 117 units when completed in January. Walker Construction Inc., of Spokane is constructing the project and NAC Architecture, of Spokane, is the designer.

Ongoing labor shortages also have a varied impact on occupancy at senior homes, representatives here say. At Orchard Crest, Schmick says, “We didn’t lay off people during the pandemic, we just found other things for them to do.”

She adds that Orchard Crest has recently hired a number of staff members and is looking to hire nine more employees to work at the community in a variety of positions.

At Touchmark, Thompson says the company provided a significant wage increase for employees as part of its retention plan.

Curryer says Rockwood Retirement Communities also has increased wages for its staff and has turned to contract labor agencies to meet its staffing needs.

“Our largest cost is labor. We regularly have to pass along rate increases to residents, and we don’t like to do that,” he says. “But I think they understand, and probably our rate increases over the short term will be a little bit higher than normal to help recover these costs.”

Overall, executives at retirement communities agree that the outlook for occupancy for the remainder of the year will continue to improve.

Schmick, of Orchard Crest, says as restrictions lift and the weather improves, move-ins are expected to increase.

She says, “We still communicated with other communities, and knew we were all going through the same thing. If you’ve been in this business any length of time, you’d know there are always ups and downs. That was a down, and now we’re on our way up.”