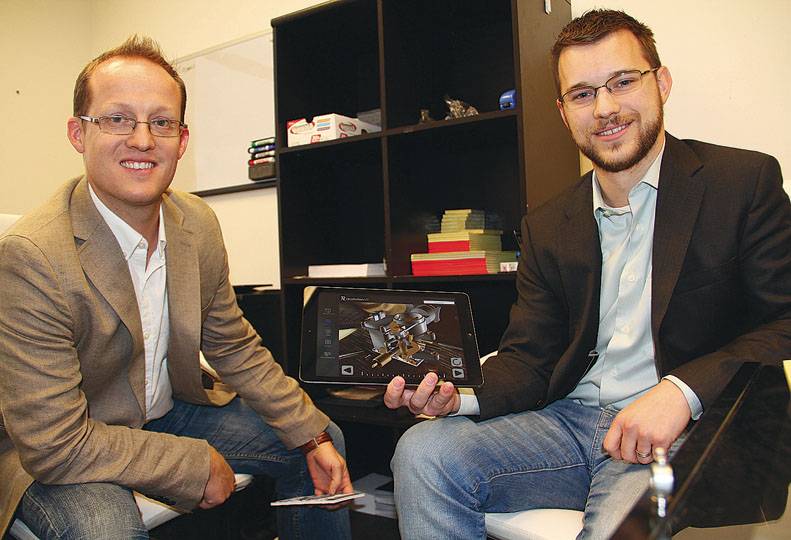 RevolutionAR currently is located in a 270-square-foot space in the offices of Liberty Lake augmented reality company Gravity Jack Inc., at 23505 E. Appleway in Liberty Lake. RevolutionAR has a contract with Gravity Jack for the augmented-reality portion of its product, says Josh Roe, president and CEO of the company.

Brendan Weatherly, vice president and COO of RevolutionAR and the company’s only other employee besides Roe at this time, says that the company incorporated in May.

“What we do is take training manuals and sales catalogs and turn them into interactive experiences using augmented reality,” Weatherly says.

Augmented reality takes a view of a physical object or environment, such as a training manual or picture of a piece of equipment, and imprints digital information on top of it, such as sound, graphics, or video.

This instruction tool could have several uses for safety training, Weatherly and Roe say. A company can use the program to train employees on proper procedures, safe practices, and use it to test employees on safety before allowing them out in the field. It also could enable employees to run through possible accident scenarios with a piece of equipment virtually.

RevolutionAR has verbally confirmed its first client, Roe says, and is negotiating a date to start work. Roe declines to name the client, but says that it’s a Spokane company in the aviation industry.

RevolutionAR is targeting certain industries, such as manufacturing, which can have high injury rates, Roe says.

“It’s poignant for us to talk about manufacturing because that’s a lot of what goes on in Spokane,” he says.

Weatherly says one of RevolutionAR’s applications could cost from $60,000 to $250,000, depending on the features.

Roe says that the company will consult with the client over the customization of the application itself, as well as any ongoing maintenance or upgrades.

Roe says he and Weatherly are targeting to have two clients before the end of this year, and another three by the end of the first quarter next year.

The two men are networking with local manufacturing organizations and associations, Roe says, to gain a better understanding of that industry.

While RevolutionAR’s product isn’t solely for safety training, it can be customized to include safety features, Weatherly says.

“Our app can be adapted to take that safety process and show it to employees,” he says.

Roe claims that inadequate training is one of the factors that contribute the most to workplace injuries.

“That can be true for many businesses across the higher-risk industries,” he says.

Weatherly says that improper training also can be costly to a company. He says he and Roe formerly worked with a company that lost an average of $13,000 per employee injury or loss-of-work incident.

“The root cause of those issues was employees not being trained correctly,” he says. “If we could have an app that trains them the right way, it would create a safer work environment.”

Traditional forms of training, such as specification sheets, presentations, and lectures, also aren’t very efficient for learning, Weatherly claims, because they don’t incorporate the four fundamental styles of learning: visual; auditory; tactile, or touching; and kinesthetic, or moving.

Roe and Weatherly got the idea for RevolutionAR while they were working for consulting company Haploos International Inc., which is based in Spokane. The two say they noticed flaws in the traditional approach to employee training while conducting a session for one of Haploos’ clients in the oil industry in Canada.

“In one session, it was four days of eight-hour days, doing PowerPoint training,” Roe says. “It was brutal.”

Weatherly says that, especially for employees in labor-oriented jobs such as manufacturing and construction, these traditional modes of training might not be the most efficient.

“These guys, they’re used to being out there, working with their hands,” he says.

Roe says the startup was funded by local investors, whom he declines to name. Roe also is friends with Gravity Jack co-owner Luke Richey.

“I’ve been serving on a nonprofit board with Luke, so I conceptually understood what they were doing with (augmented-reality) technology,” Roe says. “I thought, ‘What if we brought augmented reality into teaching?’ We pitched it to Luke, and he loved it.”

The two see potential for RevolutionAR’s training applications in the oil, gas, and utility industries, Weatherly says, as well as the aerospace and medical fields.

“It’s really for any company that uses a training manual,” he says. “Or, if you sell something that comes with a manual, we could use augmented reality with that.”

For example, Weatherly says a magnetic resonance imaging (MRI) technician-in-training could use the technology to train on a 3-D virtual model of the machine, instead of the machine itself, which could be costly or potentially dangerous.

“Instead of only training at the hospital, with the machine, they could take the app and go home and learn it,” he says.