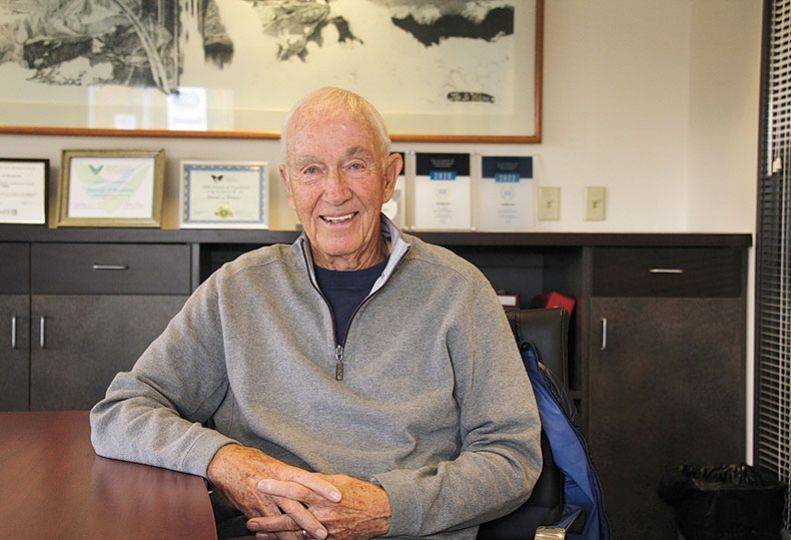 -—Erica Bullock
Now retired for 22 years, Ron Sims’ aspirations in architecture began when he was a freshman at Lewis & Clark High School in the 1950s.

After a 40-year career as an architect and 22 years into his retirement, Ron Sims, former principal of ALSC Architects PS, says he’s satisfied with the contributions he’s made to commercial, educational, and government projects in the Spokane community.

Sims, 86, says he knew that he wanted to be an architect as a freshman at Lewis & Clark High School in the 1950s. He graduated in 1959 from Washington State University with a degree in architecture and began working for Warren C. Heylman, the prominent Spokane architect behind the Riverfalls Tower and the Parkade Plaza parking garage developments.

A year later, Sims was exploring other opportunities to gain experience as an architect and joined McClure & Adkison, which is now known as ALSC Architects.

“I was just a young architect evolving into what my career was going to be,” he recalls. “When I went to work for McClure & Adkison, we were just completing the drawings for Ferris High School. It was a controversial design because it was a campus-style concept built here in an area where we had four seasons and cold winters, but it was accepted by the school district.”

Ed Clark, retired founder of Spokane-based public relations company, The Clark Co., says, “Throughout his career, Ron has had an opportunity to really design Spokane.”

Sims says he spent the first half of his career designing projects and the second half was focused on management and business development.

The largest project he was involved in was the Spokane Veterans Memorial Arena, at 720 W. Mallon, although he deflects much of the credit to the design team he gathered to work on the project.

“I did not design it, but I was instrumental in putting together the team that got the project,” he says. “But if you look at the drawings of the project, you’ll see the architect of record has my name, not the firm’s name.”

Rustin Hall, CEO at ALSC Architects, says the architecture industry is unusual in that credit for a project often goes to one person, but there’s a whole team of people involved to create successful developments.

“I like to tell folks that there’s always lots of fuel laying around, but you have to have a spark to make something happen, and Ron is a spark,” Hall says. “He made things happen.”

“The first concept they came with looked too similar to the building we were demolishing and replacing. I said it’s not going to work, so they went back to the drawing board and came up with the concept you see there today,” says Sims. “The arena was definitely positively received by the community. The nice thing about that building is if you walk in today, it looks every bit as good as the day it opened in 1995.”

Clark says Sims and ALSC Architects played a role in many prominent developments in the Spokane area that shaped modern architecture here.

“Not only did he design beautiful buildings, but they were functional as well,” Clark says.

Sims says he personally designed the former Hillyard branch of the Spokane Public Library, at 4005 N. Cook, and he was the lead architect for the Shriners Children’s Spokane hospital, on the lower South Hill, and Eastern Washington University’s John F. Kennedy Memorial Library, in Cheney.

He points with pride to the EWU library expansion.

“That project and the development of the public quad in front of it was instrumental in setting the direction for the whole campus, in terms of its development for pedestrian circulation,” he says.

Sims says many of his projects generated repeat business for ALSC and created long-lasting and continuing client relationships.

Although Sims is no longer a partner in the business, he says he often visits ALSC’s offices, at 203 N. Washington, in Spokane, to discuss the business and share project leads.

“We pride ourselves on maintaining a good relationship with our clients and allowing us to do more work with them,” says Sims.

He recalls landing the firm’s first contract with the Army & Air Force Exchange Service to design a retail store adjacent to the commissary at Fairchild Air Force Base in 1985.

“Thirty-some years later, they still have a relationship with our organization,” he says. “Within this last year, we just completed a major project for them at Joint Base Lewis-McChord, and we’ve done work in Korea, on the East Coast, in California, and Hawaii for the Army & Air Force Exchange Service.”

Hall says he had worked with Sims for about seven years and learned a lot about leadership from him before Sims retired in 2000.

Hall says Sims was a humble leader during his career at ALSC, and that Sims invested in the company’s employees by providing generous benefits and mentoring staff.

“Ron was one of my mentors and he taught me all kinds of things,” says Hall. “He taught me and so many others that you don’t market projects, you market clients by developing relationships and getting to know people. And that’s still how we operate today.”

Hall says Sims also was a servant leader who continues to be civic minded in his retirement.

“To this day, we still push hard to take care of the community that provides a living for you and a lot of credit goes back to Ron for that,” explains Hall.

Sims says after his long career, making the decision to retire in 2000 wasn’t difficult for him, although he remains private about how he spends his time as a retiree.

“I was ready,” he says. “Our firm was very healthy and growing and it was time for me to step aside.”

Hall says Sims left the company in fine shape, “and that’s why ALSC has been able to last nearly 75 years.”

Sims says that he has been fortunate that his career decisions kept him on a straight path to retirement with ALSC Architects.

“There was never a day that I got up not wanting to go to work,” he says.