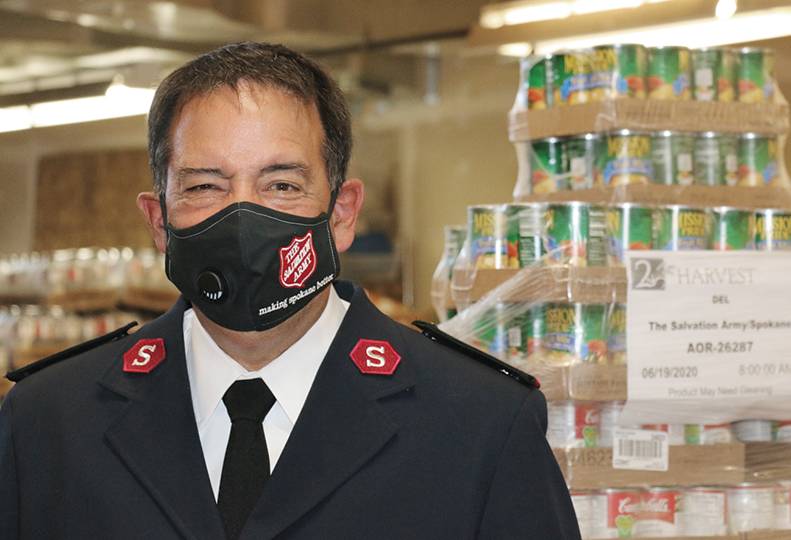 As a result of temporary furloughs and permanent layoffs due to economic lockdown imposed in the state’s response to the COVID-19 pandemic, the nonprofit says it easily will exceed that figure in 2020.

“Initially we saw a pretty steep rise in people requiring food,” Perine says, referring to the onset of the pandemic. “It leveled off, but now we’re seeing (demand) increasing again.”

Anecdotally, Perine says, he and staff have seen more requests for food assistance from people who’ve never previously sought it.

“All the food was gone in 2 1/2 hours,” he says. “We had a refrigerated truck there thinking we’d have leftovers. It was incredible. It just shows what the need is right now.”

Founded in London in 1865, the Christianity-based international organization provides housing and job training, while offering alcohol and drug rehabilitation programs, among its dozens of services.

Here, much of the Salvation Army’s budget comes from donations from private citizens and corporate partners.

The nonprofit secured $3.1 million in government grants and close to $2 million in cash donations last year. The Salvation Army Spokane also generates revenue operating two thrift stores; one in North Spokane and the other in Spokane Valley.

Headquartered at 222 E. Indiana in the Logan neighborhood just northeast of downtown Spokane, Salvation Army operations occur primarily on the campus of a 4.5-acre rectangular lot.

The campus has Indiana Avenue as its north border, Lidgerwood Street to the east, Nora Avenue on the south, and Ruby Street to the west.

The nonprofit has 140 to 150 employees on average during the course of the year, 50 of whom work full time. During the holidays at the end of the year, it’s not uncommon for the Salvation Army to hire an additional 250 part-time workers to help with the organization’s additional needs, Perine says.

“They’re really only here about 90 days,” Perine says. “They get back on their feet, they get a job and go back to regular housing; that’s a best-case scenario.”

In more challenging situations, housing is made available through the Stepping Stones program.

“This is transitional housing for people who need a little bit more help to get back on their feet,” he says.

The goal for those enrolled in Stepping Stones is to help them secure employment, become self-sufficient, and eliminate their need for government assistance.

Two other residential shelters on premise are dedicated exclusively to juveniles, Perine says.

Sally’s House provides emergency foster care services for children ages 2 to 12. Kids in Sally’s House have been removed from the custody of parents, or guardians, by either Child Protective Services or law enforcement, Perine says.

“We have two kids down there right now who were wandering around a McDonald’s and their parents were nowhere to be found,” he says. “They still haven’t been found. It appears they just abandoned them.”

Perine recalls a boy placed in Sally’s House to be cared for by staff and counselors after he was removed from his home following a series of broken bones he suffered at the hands of family member.

“He had no clothes,” he says. “He came here wearing just the gown the hospital had given him.”

Perine says children have stayed at Sally’s House from as short as a day up to nine months.

Children in Sally’s House can be returned to their parents if the adults take the required rehabilitative steps and demonstrate an ability to care for them. Short of that, the nonprofit also works to place the children in foster care, he says.

Youths in another such home, named Evangeline’s House, range in age from 12 to 20 and stay anywhere from a day to two weeks, though extenuating circumstances can keep them there longer, he says.

Perine says Salvation Army staff places a strong emphasis on caring for the children and creating a nurturing environment.

“On more than one occasion we’ve had kids leave Evangeline’s House after getting placed somewhere only to run away and come back here,” he says.

“We don’t encourage that at all, but that does tell you something about our staff,” he says.

The Salvation Army has a total of 300 beds for residents across the four residential facilities, he says.

Perine, 54, has occupied his current position for a little more than three years and has been employed with the nonprofit for 24 years, he says.

Prior to that, Perine, who’s originally from Oceanside, California, had a career as an electrical engineer. He’s also a Marine Corps veteran.

“I still don’t make what I made as an electrical engineer,” Perine says of being the head of the organization. “We’re not doing it for the money; we do it for the mission.”