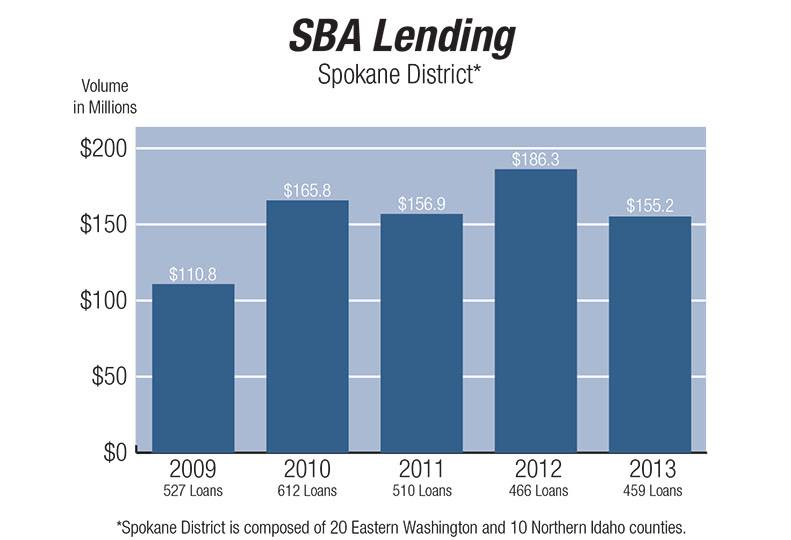 Some lending institutions that are among the leaders here in originating U.S. Small Business Administration-backed loans are anticipating renewed interest from borrowers this year, following a dip in total loan volume in the SBA’s Spokane district in 2013.

Last year, lenders issued 459 SBA-backed loans valued at $152.2 million in the Spokane district, down from 466 loans with a total value of $186.3 million a year earlier.

Ted Schinzel, manager of the SBA office here, noted that while the dollar volume of SBA loans in the Spokane district was down in 2013, the number of loans was relatively flat compared with 2012, indicating that demand for credit had remained steady.

Despite the drop in total dollar value, the loan volume last year was well above the recession-related lending trough of 2009 when SBA-backed loans in the Spokane district totaled $110 million, Schinzel says.

Some of the perennial leaders in SBA lending saw their loan originations fall steeply, while a few others managed to increase their SBA lending or hold it steady.

“Everything is more generous,” she says. “Things are opened up—not tightened up.”

Smith says the post-recession improvement in the economy could have reduced temporarily the demand for SBA loans among some small businesses last year.

“When we come out of economic crises, people who have cash reserves have the ability to look to their own resources for funding,” she says.

On the other hand, some survivors of the recession haven’t re-established a credit history, Smith says, adding, “Unfortunately, some who would like to borrow don’t have the cash flow.”

Smith says, however, she expects to see SBA loan growth in 2014.

“I think it will get better,” she says. “Small businesses that weathered the economic storm are looking up.”
She says SBA loans aren’t just intended for established businesses.

“We do SBA loans for brand new startup businesses based on their business plans and projections,” she says.

Washington Trust originated $7.8 million in SBA loans in the Spokane district in 2013, more than twice the SBA loan volume the bank generated the year earlier, propelling the bank’s rank to No. 5 on the list of top 20 SBA lenders in the Inland Northwest in 2013, up from No. 12 a year earlier.

Doug Wolford, Washington Trust’s SBA department manager, says the bank hired him two years ago to strengthen its SBA program throughout the three SBA districts it serves. Since then he’s assembled a four-person team that consults with commercial lenders bankwide to help identify when customers would be served better by government-backed SBA products than conventional bank loans.

SBA loans, because of their government guarantees, aren’t necessarily driven by collateral, he says

Wolford says businesses that survived the recession are starting to thrive again, and he sees no lack of demand for credit from small businesses, especially as the fee waivers for smaller transactions will reduce the borrower’s costs.

Spokane-based Sterling Bank originated a total loan volume of $7.8 million in the Spokane district in 2013, moving it up to No. 6 in the list of top 20 SBA lenders in the Inland Northwest from No. 8 a year earlier.

Sterling Bank, which operates in a number of other SBA districts across four states, also is ranked 24th on SBA’s nationwide list of the top 100 SBA 7(a) loan originators, says Cliff Poffenroth, Sterling’s vice president of business development.

SBA 7(a) loans, which have a maximum loan amount of $5 million, can be used for startup or working capital, to buy or improve land or buildings, or to acquire long-term equipment.

Another type of SBA loan, designated as a 504 loan, can be used to buy or improve buildings or acquire long-term equipment to create jobs.

In Spokane, Sterling participated in three SBA loans last year for ground-up construction projects ranging in value from $800,000 to $2.5 million, which Poffenroth says shows some optimism that the economic climate will continue to improve.

Poffenroth says another new SBA incentive, which is meant to ease credit for certain veterans, waives fees for loans of up to $350,000 for veteran-owned businesses.

SBA’s Schinzel says that with fee waivers for smaller loans, he expects both loan numbers and dollar volume will increase in 2014.

“Hopefully it will be back up toward the 500 (loan) level,” he says.
Looking at the first quarter of 2014, loan activity is improving nationwide, he says, adding that loans are up 10 percent west of the Cascades.

“We’re seeing growth beginning in Seattle,” he says. “The question is: Will we get the spillover effect?”
Schinzel says SBA also has streamlined the application process for all loans up to $350,000.

As of Jan. 1, applications are completed and filed electronically, which expedites approvals, he says.
“That processing should help speed up things,” Schinzel says.