Program recently has had 65 students enrolled at any time 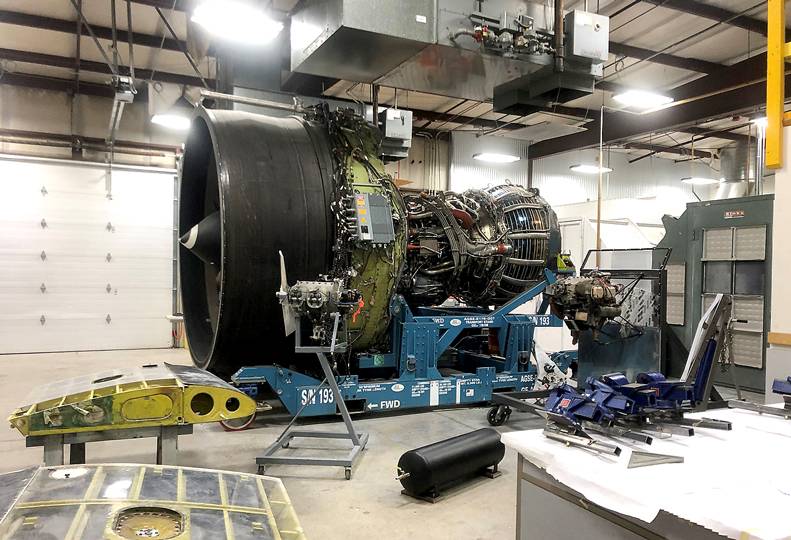 -SAMANTHA PEONE
Students in Spokane Community College’s aviation program can look to this General Electric GEnx high-bypass turbofan as the type of aircraft engine they could work on professionally.

For people interested in working on aircraft, SCC offers a Federal Aviation Administration-certified aircraft maintenance technician school, he says. SCC has also partnered with some companies to help students transition seamlessly from school to employment.

The FAA regulates what is taught at AMT schools, and requirements are consistent across the country, says Dodson.

“The focus of our AMT program is to train students to be ramp avionics technicians,” he says. “Those would be technicians who work on the aircraft, troubleshoot and diagnose a malfunction of the system, repair it, return the aircraft to service, and get it back flying,” he says.

Students who finish the coursework receive a certificate of completion and can test for their airframe and powerplant license through the FAA. Graduates can work on any U.S.-registered aircraft, Dodson says.

During the six-quarter program, students undergo 1,900 hours of training and education. This includes 400 hours across two quarters of “general studies,” in which students learn about basic electronics, aviation codes and regulations, how to perform basic mechanic tasks, identifying different hardware and tools, aircraft ground handling, and related mechanic studies.

The AMT school typically attracts between 30 and 35 new students each fall and has roughly 65 students enrolled at a given time, he says.

Because SCC has four faculty members teaching in avionics, the college can accept 100 students in theory, says Dodson. In practice, however, there isn’t enough equipment for that many students to work on at the same time.

Along with the AMT school and aviation maintenance associate degree, SCC’s electronic engineering program students also have the option to specialize in avionics, he says.

Graduates work with several companies in a variety of fields. They can work in large commercial airlines, in small hangars, or within airplane manufacturing, law enforcement, border patrol, firefighting, agriculture, or other specialties.

For example, Horizon Air, a subsidiary of Alaska Air Group Inc., has a hangar in Spokane and employs several of SCC’s graduates, Dodson says.

Most graduates end up leaving the Spokane area, he says.

SCC graduates often start their careers making between $20 and $25 per hour, a typical wage for the industry within the U.S., says Dodson. Many employers offer good benefits as well, he asserts.

“Because everyone is in need of new mechanics, they’re all offering more additional benefits,” he says. Benefits could include paying for relocation costs, and free flights or standby flights.

Dodson says working on aircraft is a great way to make a living.

“There’s a lot of satisfaction in knowing that you’ve repaired an aircraft that has 300 people flying around in it safely from point A to point B,” he says.