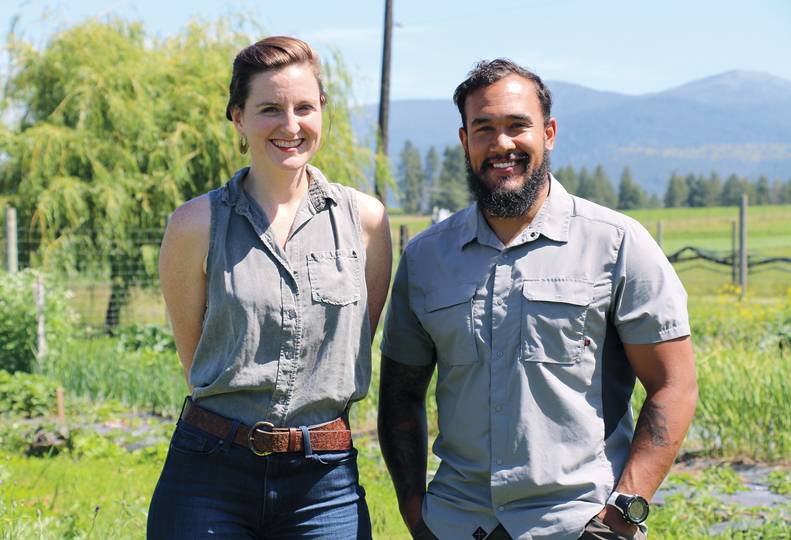 -Virginia Thomas
Share.Farm’s Stephanie Watson and Vince Peak visit a Greenbluff farm that provides it with produce for its customers.

The founder and CEO of the 2-year-old online farm-to-consumer market says the COVID-19 pandemic has presented as many opportunities for Share.Farm as it has challenges.

Peak and Erik Kobe, who handles sales for the company, launched Share.Farm in 2018 as a year-round marketplace platform for vendors of produce and other goods typically sold at farmer’s markets. The marketplace hosts products ranging from everyday items, such as asparagus or eggs, to more unusual produce, such as black garlic or morel mushrooms.

Share.Farm doesn’t have a physical office space, but it rents warehouse space on an as-needed basis — Peak calls it a “ghost warehouse model” — at the Eat Good Cafe, in the Meadowwood Technology Campus, in Liberty Lake. Eat Good Cafe is owned by Adam Hegsted, who is also chief strategy officer at Share.Farm.

In May, Share.Farm was one of two Eastern Washington companies selected by the U.S. Department of Agriculture to participate in the USDA Farmers to Families Food Box program, which provides food from local producers to food-insecure families.

Stephanie Watson, director of operations and community partnerships for Share.Farm, claims the company is the only USDA partner in the program that is delivering food boxes directly to families.

“For us, it’s a natural fit because we have the partnerships and the technology — all we really need to do is figure out that distribution,” Watson says. “That’s where we can leverage our network, which is growing.”

Share.Farm distributes about 9,000 pounds of food in 20-pound boxes through the USDA program. The program has been a boon to farmers who might otherwise see their crops go to waste, Watson says.

U.S. Secretary of Agriculture Sonny Perdue announced on April 17 that the USDA would use the Families First Coronavirus Response Act to buy and distribute up to $3 billion in agricultural products, including fruit and vegetables, dairy, and precooked meats. As of June 4, more than five million food boxes had been distributed through the program.

The Farmers to Families Food Box Program is slated to end June 30, but Perdue announced last week that the USDA will extend the contracts of some vendors through August 30 to provide up to $1.16 billion worth of food. Share.Farm is among the vendors who have received a contract extension.

“The grant is not part of our sales. It is simply a project we do for the community to support those in this time of need,” Peak says.

“It’s this multiprong approach where our marketplace captures one food audience of people who value unique, artisan products, but then we’re also meeting the community need here in town and helping local farmers at the same time,” Watson says.

Peak says Share.Farm had launched a corporate dining program in January that was rapidly gaining popularity, with customers such as Avista Corp. opting to receive fresh produce for use by cafeteria staff.

However, when corporate customers were forced to close down due to the pandemic, what had quickly become the bulk of Share.Farm’s business dried up. Peak was worried about the hit to Share.Farm’s bottom line.

“But we had a huge spike in sales,” Peak says. “People wanted more local food. They wanted contactless delivery. They wanted fewer touch points on their food.”

The increase in sales began before the USDA announced its Farmers to Families program, Peak says.

Share.Farm provides contactless delivery of produce directly to the customer’s door every Thursday. Share.Farm currently receives about 60 delivery orders a week. When the company launched delivery services last July, it was handling about nine orders per week; prior to COVID-19, Peak says Share.Farm was receiving about 25 orders weekly.

Watson asserts that Share.Farm’s model also has proven beneficial to food producers in the area by providing an alternative market as well as the Farmers to Families program, meaning farmers are less likely to face a surplus that they can’t sell.

Peak says the relationship Share.Farm has been growing with food producers has been beneficial to all parties because Share.Farm can determine what’s selling and what’s not based on website analytics.

“We’re at the front end of the consumer demand. We know exactly what they’re looking for on our site, what they’re typing in, the things that they’re buying,” Peak says. “It’s easy for us to communicate back to our sellers and our producers, ‘Hey, people are looking up this heirloom tomato variety more than any other kind. This is probably the one you should be growing.’”

Peak says the vendors Share.Farm works with number in the hundreds. The company currently serves a small area between Spokane and Coeur d’Alene, but Peak says the company plans to launch in Seattle by the end of July, followed by other Pacific Northwest cities such as Yakima and Boise. Peak says he envisions Share.Farm’s presence will expand eventually to cover most of the Pacific Northwest and parts of California and Montana.

Share.Farm has also become a driver of employment in the area, Peak asserts.

“One part of that is by supporting the sellers with the supply-demand analytics, who then hire individuals in those localities to pack and distribute (orders),” Peak says. “We also have our own driving service, where anyone can make money delivering food.”

Peak says Share.Farm uses the same tools to connect with drivers that delivery services such as Uber Eats and Postmates use, and Share.Farm can use existing gig drivers from those platforms to help distribute orders.