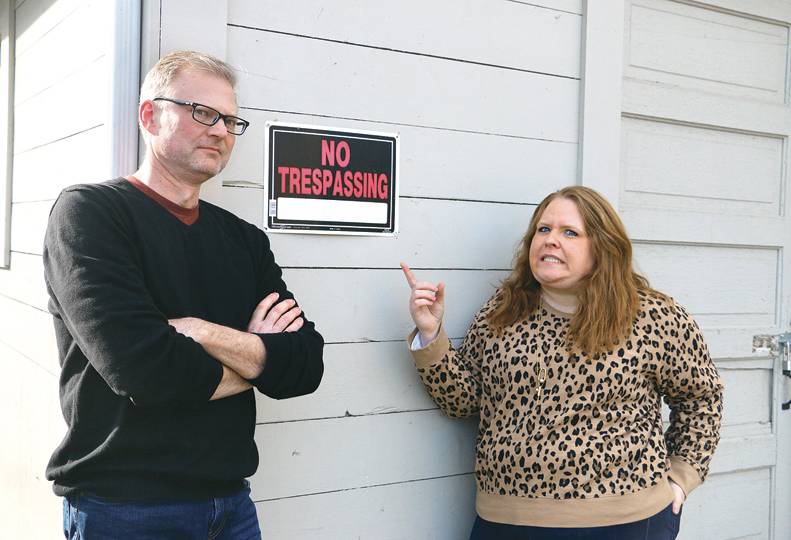 Primed and ready for their next challenge, longtime Spokane Arena management duo Matt Gibson and Becca Watters are turning their combined creative firepower from venue management to event creation and execution with their new endeavor, Silverscout Presents.

Gibson, a Spokane native and former general manager of the Spokane Veterans Memorial Arena, says after 20 years with the Spokane Arena, the time was ripe to start the next chapter, adding that he and Watters had been in discussion for nearly two years about what would come next for the longtime friends.

“A friend of mine once said to repot yourself every 10 years is pretty advantageous for anyone’s life and career. I figure I was overdue by about 10,” he says, adding “(Watters and I) talked about a few ideas, but what we kept coming back to was the development and execution of live community experiences that could grow into a tradition, so that’s what we’re primarily looking at.”

At the arena, it was more about ensuring everything was in place for someone else to come in and throw the event, Gibson says, whereas with Silverscout, he and Watters will have direct control over the creative process and what’s being presented.

The pair was involved in bringing musicians Metallica, Bon Jovi, Pearl Jam, and Garth Brooks, as well as partnering with the NCAA and U.S. Figure Skating to bring several national championship events to the arena.

“It’s your experience with food and beverage, your experience at merch stands, or with your friends taking selfies … it’s creating a whole bunch of secondary experiences that drive people. That’s what really gets people going,” she contends. “It’s not just about being at the show, it’s showing that you’re at the show. It’s taking pictures of yourself, checking in. So, we want to create those sorts of experiences where people want to do that.”

Watters started as an intern at the arena while studying at Gonzaga University before shifting into a full-time role in the marketing department following graduation. She stepped into the assistant general manager position with the arena in 2017.

She says she expects the company to take on the traditional promoter business model for revenue for the events Silverscout will put on, in which the promoter puts its own money on the line for events to pay the bills, and then whatever profit is left over from the event after the bills have been paid goes back to the promoter.

She adds that she and Gibson are still determining how it will work for events in which Silverscout will partner with local entities but are exploring either using the promoter business model or a commission model.

The company’s first event is the Lilac City Brewfest, on May 16, as part of the Lilac Festival’s lineup. Inspiration for the event, now in its fifth year, came from the Oregon Brewers Festival held annually in the Portland area, which runs for five to six days and draws over 80,000 to the city, Watters says.

“The idea is to create and organically over time build up events like the beer festival into a tourism draw for the region,” she says.

Gibson points to Pig-Out in the Park and Bloomsday as examples, adding “We would really like someday, with all humility, to maybe be able to bring more of that to Spokane. To create something that the entire region comes to town for.”

Gibson, separately from Silverscout, is also working with WestCoast Entertainment on the Monsters of Rock 2020 concert that is planned to be held at Joe Albi Stadium this summer. He declines to comment on the current status of the event but does say the team is still working on the project.

Spokane is coming into its own, Gibson says, “It used to be like we were considered Seattle’s kid brother for a long time, or annoying little sister. We always had to look to the west side of the state to see what they were doing, what was going on,” he says.

Now, the population is blooming as more people are drawn to the region, which Gibson contends creates potential for Silverscout.

“There are a lot of people coming in from other parts of the country that are expecting something to be happening every weekend … that’s a big potential audience,” he says. “Spokane is growing up into a major force in the country and everyone’s looking at us right now.”

Going from venue management to event creation has been interesting, Gibson notes.

“It sounds so ethereal, and that’s some of the problem that I’ve had,” he says. “We used to manage a venue, and there’s walls and floors, there’s tangible things. We had an asset that we managed and now we’re a services company.”

He adds, “That’s taken some time to get used to, the fact that any bank is going to look at us and say, ‘You have nothing, you don’t have anything except for you and your ideas,’ which sounds sketchy, but we see time and time again how ideas get turned into reality and are a strong economic force in whatever community they’re in.”

Overall, Gibson says he’d like to see the company put on two to three large scale events a year. While its main focus seems to be on producing events for municipalities, cities, and nonprofits — whether that means producing a new event or growing an existing one — Gibson says the company also plans to work with venues on talent buying.

Its service area runs from the Cascade Mountains to eastern Montana, he says, down to northern Oregon and Idaho.

The duo say they have a few event ideas in the pipeline, but they’re hesitant to divulge specifics, noting that it’s generally taboo in the industry to announce an event before it’s a sure thing.

Watters does say the team has been approached to create new events and grow established products. She adds that some events, such as the beer festival, involve “food and beverage experiences” and others are similar to traditional concert events.

As for the company’s future, Gibson sees Silverscout staying small employee-wise, but morphing into “a dynamic where we can benefit the community not only through charitable donation, but also through economic impact and that flavor that Spokane has developed over the years.”

At this point though, Gibson says he’ll consider the company successful if Silverscout can put on an event that people enjoy.

“I’ll be happy if we can just do that, grow something to the point where people are happy to be there, whether or not it’s a $500 or $500 million (impact),” he says. “No expectations at this point. We’re looking at just getting going and surviving at this point.”