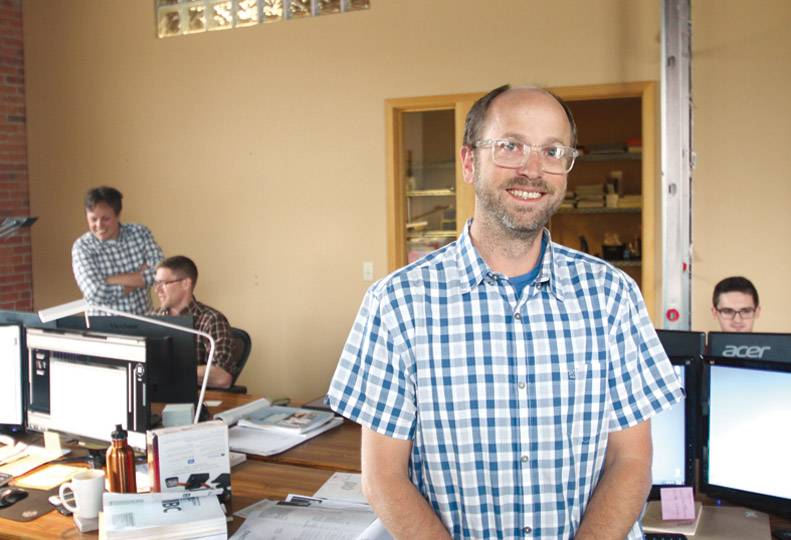 -—Kevin Blocker
Uptic Studios Inc. principal Matthew Collins, who started the firm with his wife, Julie, says the firm now has close to a dozen employees. It’s located in a 3,000-square-foot downtown space.

Uptic Studios Inc., which started with principals and founders Matthew and Julie Collins working out of their South Hill home six years ago, now is becoming a familiar name in Spokane’s architectural design community.

The Spokane Chapter of the American Institute of Architects recently presented the firm with a 2016 Merit Award for its design of a residence along Park Lane on Spokane’s South Hill. It was the firm’s first such award.

“We’ve done better every year since we started,” he says, noting that Uptic currently has 35 active projects.

He says the firm consistently employs 10 to 12 people. Five employees and the Collinses make up the design staff.

Uptic’s commercial design resumè includes Magner Sanborn Inc.’s office space downtown, Physical Therapy Associates on the South Hill, and the Liberty Lake Corporate Campus. Interior designs and renovations Uptic was involved in include the Bing Crosby Theater, Republic Pi restaurant on the South Hill, and the Flying Goat restaurant on the North Side.

Of the Park Lane residence, the Spokane AIA recognized, the award panel writes: “Thoughtful site analysis and building response to site. Planning diagram is strong in the massing and execution of the building. Exceptional craftsmanship. Material richness and simplicity of palate, with rich spatial laying.”

Uptic won in the category of projects built under $5 million. There were six total award categories recognized by the Spokane AIA.

Last October, Spokane Mayor David Condon recognized Uptic for its design of the Perry Street Brewery on the South Hill at 11th and Perry.

Before starting Uptic, Matthew Collins was a partner with architects Sam Nystrom and Chris Olson at Nystrom+Olson+Collins Architecture, of Spokane. Sam Nystrom is Julie Collins’ uncle.

Matthew Collins, 42, earned his undergraduate degree in architecture at Washington State University and later studied at the Architecture Association, of London, and the Savannah College of Art and Design, in Savannah, Ga. Meanwhile, Julie Collins earned her degree in interior design and studied photography at Spokane Falls Community College, he says.

“I love what I do. I wouldn’t want to do anything else,” Collins says. “This isn’t unique to architecture and design, but it’s in that category of work where what you do is more of a lifestyle than a vocation.”

He adds, “I love design. I started trying to figure out how to earn a living with Legos when I was 6.”

But becoming an architect almost didn’t happen after he graduated from Gonzaga Prep High School.

His father was a businessman and recognized his son’s creativity. “But he would ask, ‘How do you plan to make a living?’ ’’ Collins says.

Without an answer to that question, Collins decided to enroll in business school at Santa Clara University in California, he says.

He returned to Spokane for the summer between his freshman and sophomore year. While working a summer job, he met Washington State University professor David M. Scott who chaired the university’s architecture department at that time.

Collins says before the summer ended, he drove back to Santa Clara, retrieved his personal belongings from a storage unit, returned and enrolled at WSU for his sophomore year.

Upon graduating from WSU in 1996, he went overseas to study at the Architecture Association of London for the next two years.

After leaving London, he and Julie moved to Seattle where he was hired by the global architecture firm NBBJ. While there he worked with other architects on projects that included Safeco Field, Amazon.com Inc.’s office campus and Harborview Medical Center.

“It was a great experience. I just tried to design anything I could get my hands on,” Collins says.

From Seattle, Collins then moved to Savannah, Ga., from 2000 to 2005. While there he worked as a designer for the former Palmer Johnson Yachts company. He also worked for design firm Concept Arc International in that Georgia city.

“It was during all that time that I got a chance to build a resume that included stadiums, retail, housing, boats, and a multiuse dormitory,” Collins says.

“I think it’s one of the reasons our portfolio at Uptic looks the way it does,” he says.

The Collins’—both Spokane natives—became homesick and desired to return here. That’s when Nystrom and Olson made an offer to Collins to become a partner in their firm in 2005. He remained there until he and his wife decided to start Uptic in 2010.

“Uptic Studios is us. It’s not Matthew Collins; it’s not Julie Collins. We wanted to create a firm where there was a strong sense of a team concept working together,” Collins says.