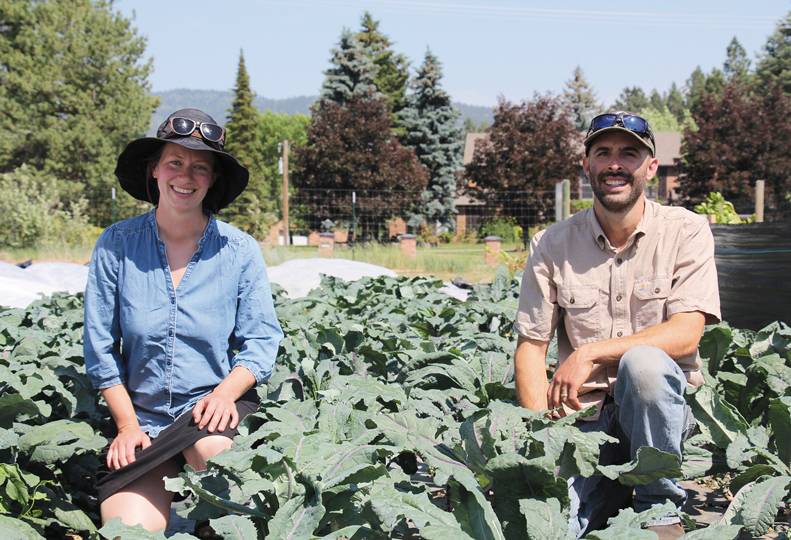 -Natasha Nellis
Madyson Versteeg and Jorge Cano of CasaCano Farms in the Valleyford area south of Spokane Valley, say diversifying their offerings has made the business more resilient in recent years.

Tucked away on a small 50-acre property in Valleyford, about 12 miles southeast of downtown Spokane, CasaCano Farms owners Madyson Versteeg and Jorge Cano have been hard at work reducing fire and drought risks.

Increasingly hotter summers drive up the risk of fires that could wipe out a farm in the blink of an eye, they say.

Last year was the hottest on record, and while observers say it likely won’t be unseated this year despite recent triple-digit temperatures, Eastern Washington farmers are preparing as best they can to prevent losses of crops and livestock.

CasaCano Farms grows produce ranging from winter squash and broccoli to kale and carrots and specializes in lettuce mix and arugula. Additionally, both cattle and pigs are raised on the farm as well, says Versteeg.

A little under an acre of the 50-acre property is used for crops, she says. In total the farm has 23 cows, which graze on both the CasaCano property and about 100 acres of neighboring land.

The diversity has led to a natural resiliency at the farm that allows it to withstand droughts, says Cano.

“For us, if our corn dies, it really doesn’t matter because we have all this other stuff,” he says, adding that the meat sold by the farm also helps balance any produce sales losses.

To reduce fire risk, Cano has worked to thin the forest around the property to reduce fuel loads, and the pair have established a fire plan in case of emergency to protect the livestock.

“I did wildlife firefighting for a couple of summers,” he says, adding that thinning and pruning trees, as well as cutting down long grass, were common methods used to reduce fire risk and make it easier to defend one’s home.

The married couple also have planted over 50 trees on their property to provide shade for the vegetables and a wind break to shield the produce from the increasingly strong windstorms that roll through every year.

“We have lost a lot of crops in the spring, because the wind just beats them up so bad and it dries it out,” says Cano.

And this year is looking to be one of the driest and most dangerous on record.

The National Interagency Fire Center set its fire-risk level for the U.S. at four out of five, which has prompted Eastern Washington fire officials to send out warnings in anticipation of a hot and dry summer that has increased the risk for severe fires.

Overall, the average annual number of fires that have broken out in the Western U.S. has decreased over the last five years, according to the National Interagency Fire Center, but the fires that do burn are more severe and destructive and cause hundreds of billions of dollars in damage in Washington, Oregon, and California.

Farmers and farmworkers are at a greater risk for exposure to harmful airborne particles and may come into more frequent contact with ash and chemical residue because of their work outdoors, according to the University of California Davis Western Center for Agricultural Health & Safety.

Lost workdays because of smoke and safety issues also can affect workers economically as well, in addition to the stress and other mental health issues that are related to the effects of wildfires, according to the university.

“On our scale, where we’re working just by hand, we do have the tractor … but we don’t do any of the harvesting or any of the vegetables with the tractors. (Smoke) limits our work hours for sure,” says Versteeg.

It also drives away customers, she says.

CasaCano Farms sells to three Spokane-area restaurants—Wild Sage Bistro, South Perry Pizza, and Luna. It also sells directly to customers and offers produce with a community supported agriculture system through which consumers can buy boxes of a farm’s harvest in advance and have them delivered at regular intervals.

The mitigate the health dangers of smoke inhalation, Versteeg and Cano wear N95 masks, though those were in short supply over the last year, she says.

They also are looking at installing a heating, ventilation, and air conditioning system in their produce washroom, to ensure they have somewhere to escape the heat and the smoke during particularly smoky fire days, adds Cano.

Additionally, Versteeg and Cano plan to bring in a specialist to evaluate the well on the property to determine whether it’s efficient and able to keep up with the demand, or if they need to dig their well deeper, says Cano.

A neighbor recently had to dig a deeper well, as it was going dry from watering the lawn during the drought, says Cano.

He adds, “Our well is definitely something that we want to make sure we’re not over drying. But if the whole water table in this whole area drops because of drought, then it would affect everyone’s well.”

Most farms and homes around CasaCano Farms operate on individual wells, says Cano. The drought, compounded by new housing developments in the area, is putting pressure on the water source, he asserts.

“There’s no management or regulation or control over it,” he says. “The water thing is a big issue.”

Under the farm’s current operating permit, the water available to irrigate crops is limited, whereas homes and personal gardens aren’t limited in their water usage.

“It’s an interesting issue. If the water does drop, do we say who gets to use it? I’m not saying that food is more important than the lawn, wink wink, but I think it is,” he says.

Cano estimates it will cost around $5,000 to dig a deeper well. The pair has already spent about $5,000 on new trees and another $1,000 to bring in a tree trimming company to chip slash piles that they would normally burn but opted not to because of the dry weather.

At Sweet Mercy Farm, in the Glenrose Prairie area just southeast of Spokane, Lucas Miranda says he often has to step into the greenhouses when the sprinklers are running to get cleaner air during the hot, smoky summers.

“I could barely breathe. It was unhealthy to work outside,” he says.

Its vegetables are irrigated, so they are relatively protected from drought and fires, he contends. The bigger issue, he says, is the threat droughts are to the chickens.

“We raise pasture birds,” which are rotated through the pastures to ensure the hens are healthy, he says. The pastures aren’t irrigated, and a lack of rain will affect the quality of eggs.

When that happens, Miranda has to supplement their feed with fresh ground feed, which increases costs.

Because of the droughts, wheat yield in the Pacific Northwest is expected to be 30% of what it was last year, and grain prices are expected to increase, he contends. On average, it takes about 3,000 pounds of feed a month to sustain the over 300 hens on the farm, he says.

The farm, which has been established for about two seasons, raised sheep the first year, says Miranda. This year he had to sell all the sheep because it would have been too expensive to feed them, he contends.

The prospect of a lack of rain is a bigger threat to larger grain producers whose farmland isn’t irrigated, and they therefore are dependent completely on the rain, he says.

“You don’t have rain; you don’t have food,” he says, adding, “Water’s a pretty important element to this thing called farming.”