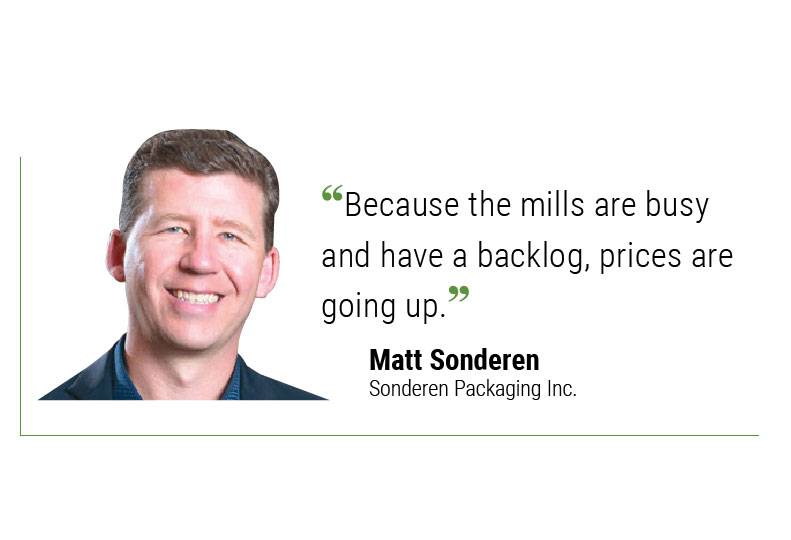 Some manufacturers here say that demand for their products remains high, but they expect to experience ripple effects of the COVID-19 pandemic into 2022.

Tod Byers, president of Spokane Valley-based electronic circuitry board manufacturer Servatron Inc., says he expects materials shortages, high prices, and extended lead times will continue to impact the company and its customers for at least another year.

"Parts manufacturers say they'll be done in eight weeks, and suddenly they send us a note two weeks before our order is due to say now it's 52 weeks," Byers says. "It causes disruption to both our factory schedule as well as our customers' order expectations."

At the same time as the company is losing demand in that sector, Sonderen says the supply of raw materials is continuing to tighten.

"Because the mills are busy and have a backlog, prices are going up," Sonderen says.

He says he expects cost increases in raw materials and in shipping will drive up consumer prices of goods.

According to a survey released June 1 by the industry association Institute for Supply Management, demand and materials shortages are contributing to elevated prices. ISM says manufacturers have an average 11-month backlog of orders; the association found prices paid by manufacturers are sustaining high levels not seen since the midst of the 2008 economic recession.

Sonderen says that international freight has been hampered by a lack of shipping containers and ports that are at capacity. Domestically, he blames shortages and backlogs on COVID-related shutdowns and slowdowns, as well as the cold snap the southeast U.S. experienced in February.

Byers says some fabrication companies in China and other parts of Asia were shuttered due to COVID, while high tariffs drove others to relocate or close, contributing to supply constraints.

"There are some opportunities to find some equipment and things like that out there, with all of these business owners deciding how to retire or go out of business," Mowe says.

Mowe says Nicks Boots is on track to see significant revenue growth in 2021 compared with 2020.

Sonderen says prices and supply constraints mean everything must be planned further in advance. An order that would have taken four weeks to complete pre-pandemic now often takes at least twice that, he says.

"We're educating our customers and working with them to plan ahead and forecast a little further out so that we can make sure we're still supplying them," Sonderen says.

Byers says Servatron also is trying to plan ahead to cope with high prices and low supply of some parts.

"We're bringing in more inventory than we normally would to try to offset some of that," he says. "We may look at alternative sources … to try to find parts."

Sonderen says that labor continues to be an issue throughout the supply chain.

"We've heard from some of our customers that they aren't able to produce as much as they would like to, because they don't have enough people to do the job," he says. "It's probably going to slow down the work that manufacturers are able to do."

Labor shortages are likely to continue throughout most of 2021, as are materials shortages and high prices, Sonderen says.

"On the supply side for raw materials, I think it'll start to catch up in the fourth quarter of this year," Sonderen says. "A few of our suppliers have already said that they're starting to get caught up. As for the labor side, I have no idea. That's such a wildcard."

Mowe says the unpredictability of consumer behavior also will play a role in manufacturing's economic state over the next six months.

"With the pandemic, we had a pretty robust e-commerce business. We're wondering if that's going to continue," Mowe says. "There's a little trepidation about what's going to happen as people switch back from purchasing goods to buying services, going out, and traveling."