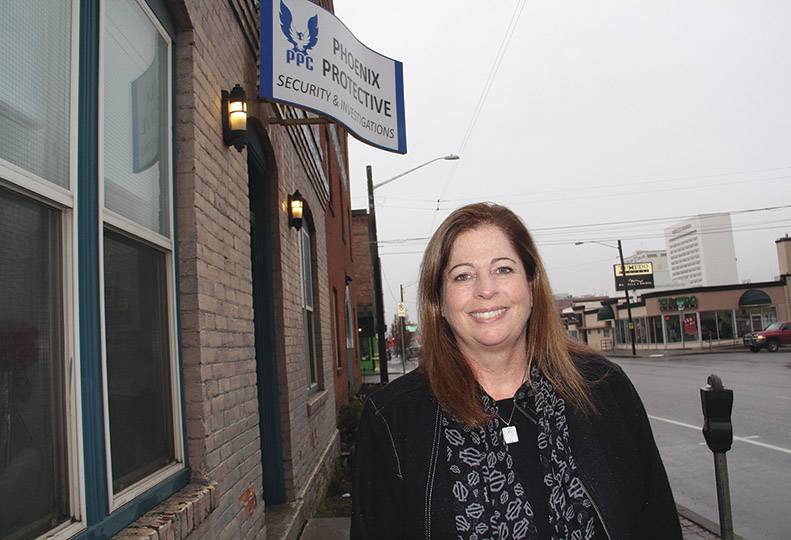 Phoenix Protective Corp., a Spokane-based provider of security services, had revenues of $10 million for 2014, up about 10 percent from the previous year, and is expecting more growth this year, says co-owner and President Sheila Leslie.

“We expect to grow about 10 percent (in 2015), which we have just about every year we’ve been in business,” Leslie says.

Phoenix, which is headquartered in 3,000 square feet of space at 223 W. Second, also has offices in Yakima, Vancouver, and Auburn, Wash., she says.

The company, which launched in 2002, employs 400 people total, 50 of them here in Spokane, Leslie says. The company’s Auburn office is the largest, she says, with about 200 employees.

“We cover Alaska, Washington, Idaho, Montana, and Oregon,” Leslie says. “We’re smaller than the national companies, but there’s not many regionally-based companies our size who cover the territory we cover.”

“The main thing we do is provide uniformed security (officers),” she says. “We also have plainclothes officers.”

The company’s plainclothes officers often are hired to apprehend shoplifters, Leslie says, mostly at grocery stores and pharmacies. The officers approach suspected shoplifters so employees don’t have to, she says.

“When you’re working at the store, you’re focused on customer service and making sales,” she says. “(The shoplifter) could also have a criminal background … that’s why companies hire us, because we’re specially trained.”

Phoenix also provides security for events, such as Hoopfest, rodeos, and county fairs, she says.

“You would consider us a full-service company,” Leslie says.

Beyond security, the company handles investigative work, including checking out worker’s compensation claims, she says.

“That can involve surveillance if a business feels an employee has falsified a claim,” she says. “We also do internal theft investigations.”

“That would be like, suppose you’re a car dealership who wants to know how many cars your competitor is selling,” she says. “We would go park in front of it and find out for you.”

She says the company typically maybe working on 10 to 15 active investigations at a time here, and it has about 150 clients in the Spokane area. The company provides its services around the clock, she says.  It bills clients for most of its services based on an hourly rate.

“They’re paying per hour for that loss-prevention or uniformed officer,” she says.

“Alarms are our highest priority,” Leslie says. “Our response time is often quicker than law enforcement, just because they have so many things to focus on.”

Clients can set a priority call list with their alarm manufacturer, Leslie says, so the call automatically goes to Phoenix.

Leslie and business partner Jagrut Shah, who is based in Central Washington, launched Phoenix after a security company they were employed with sold.

“In that process, I’d gone back to school to get my MBA (master of business administration degree),” she says. “And I realized I didn’t need to be at that other company.”

Leslie says Phoenix Protective Corp., which is named after the mythical creature that rises from its own ashes, had four employees when it first opened.

“Our growth has been through a lot of really hard work and building value with our customers,” she says.

One way the company builds value is to incorporate new techniques and technologies, Leslie says, such as a real-time security reporting program called Silvertrack. The program enables officers to document incidents with a company cell phone.

“The information gets uploaded in real time, and it’s time and date stamped,” Leslie says. “The customer can see it right away.”

The officers can document an incident with photos and make notes about what happened, Leslie says. The program then notifies the client via email that an incident has occurred.

The program also enables officers to prove they responded to an incident or were checking a property when they were supposed to, Leslie says.

“In our industry it’s common to question, ‘Was the officer even there? What am I paying for?’” Leslie says. “This shows they were there.”

Last year, Phoenix also started having its officers wear body cameras, Leslie says. The cameras can act as a deterrent to people who may become confrontational with the security officers.

“Secondly, if it comes up as a he said-she said type thing, we can back up our officers,” she says.

“That is our largest recruiting pool,” she says. The company also hires criminal justice students and people who have law enforcement or corrections experience.

Regardless, all of the officers Phoenix hires go through its training course, Leslie says. This training includes defensive tactics, using a baton and Taser, and firearms training.

“And, most importantly, customer service,” she says.

Phoenix soon will be adding some new officers to its ranks, Leslie says.

“We’re adding K-9,” she says. “So we will have alert dogs, not attack dogs. Their role is to be with the officers and alert them to anything unusual.”

The dogs will ride along on patrols with officers to the client sites that have approved Phoenix to use dogs there, Leslie says.

“This will enhance our effectiveness without having to pay for a second person,” she says.

Another area of growth for Phoenix in the last few years has been school security, Leslie says. Multiple national school shooting incidents have increased public concerns, she says.

“It’s been heightened since (Newtown) Connecticut,” she says. “But it’s something we’ve been doing for eight years.”

For the future, she says the company is focused on growing in key markets.

“We’re just looking to continue to grow in markets that have the highest demand for skilled officers,” she says.