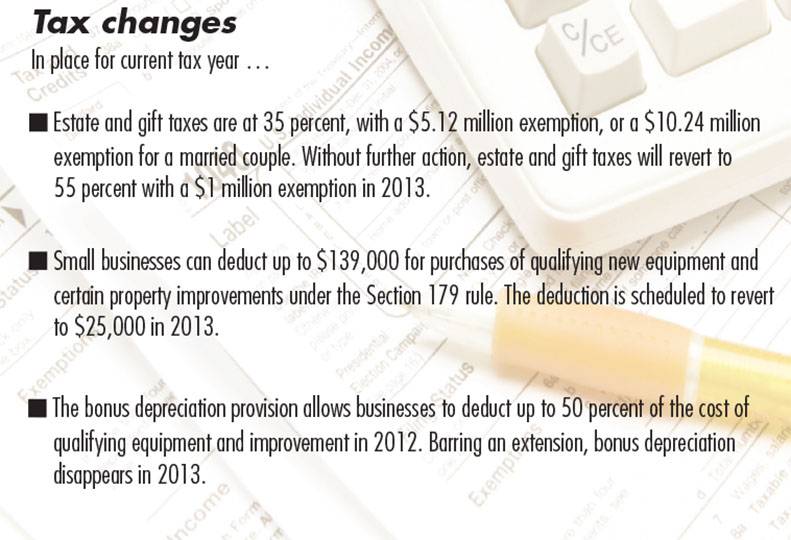 The largest year-over-year individual tax increases in at least a decade are in effect, and high-income earners who haven't planned for them might be in for a shock, tax preparers here say.

Many middle-income taxpayers also might be surprised by the increases in their tax bills, they add.

"It's the first time individuals are seeing a jump in rates since the Bush administration lowered them back in the early 2000s," says Jason Munn, senior tax manager at the Spokane office of Seattle-based accounting firm Moss Adams LLP. "That's being combined with the surtax on investment income and a tightening of expensing rules."

Tax rules for 2013, at least, are more certain now than they were for 2012 at this time last year, because many rules hadn't been hashed out by Congress a year ago, says Kevin Cox, principal at the Spokane office of Minneapolis-based accounting firm LarsonAllen LLP.

"We know what the laws are now, and it's a matter of trying to avoid as much additional tax as you can," Cox says.

High-wage earners—single filers with more than $400,000 in taxable income and married filers earning more than $450,000—will see their income tax rates climb to 39.6 percent from 35 percent, which amounts to minimum income tax increases of $18,400 and $20,700 for filers over their respective thresholds.

That doesn't include new Medicare taxes, phaseouts of personal exemptions and charitable deductions, and increases on capital gains and investment income for certain high-income taxpayers.

Federal income taxpayers whose income doesn't reach the level of the highest tax bracket will see more familiar Bush-era rates of 10, 15, 25, 28, or 35 percent, depending on income level.

Cox asserts that the tax brackets are compressed, though, because the reduction of other tax breaks make it more likely that some taxpayers will bump up to a higher tax bracket. He estimates that, due to higher rates and new taxes, tax bills will be an average of $2,000 more per household for 2013 income than for 2012.

Even in an environment of tax increases, there are opportunities to take advantage of, Cox says.

"Depending on their situations, some individuals have opportunities to get distributions out of companies instead of salaries," he says.

The Affordable Care Act increases Medicare taxes in 2013 by 0.9 percent to a total of 2.35 percent on earned income exceeding $200,000 for single filers or $250,000 for joint filers. A Medicare tax surcharge of 3.8 percent is assessed on investment income for people at or above those income levels.

"Net investment income is tricky," Munn says, adding that it includes a range of income such as interest, dividends, capital gains, and royalties.

"Rental properties are definitely part of what's in the rules," he says. "People owning property linked to a business they also own have to be careful that the rental income isn't viewed by the IRS as passive in nature."

In such related-ownership cases, it's important to link the business to the property that's supposed to be rented, so it's not considered an investment-income property, he says.

The Affordable Care Act "is a real fluid law," says Andrew McDirmid, a partner at Spokane-based accounting firm McDirmid, Mikkelsen & Secrest PS. McDirmid notes that one of the act's mandates that requires businesses with 50 or more employees to provide health care coverage has been delayed until 2015.

"We're trying to notify clients about changes and compliance as often as we can as deadlines come up, but it seems to be a moving target," he says.

Penalties for noncompliance are expected to be a big factor in funding Affordable Care Act, which likely will be enforced by the IRS, McDirmid says.

"We're going to see a soft approach on the penalty side for a period," he says. "I think penalties are going to become a bigger issue, so understanding when we have to file is going to be important."

McDirmid doesn't advise business clients to pay the penalties in lieu of sponsoring a qualified plan.

"Most clients aren't hiring unskilled labor," he says. "If they take benefits from employees, it doesn't make them competitive in the market to keep the best employees."

"The impact isn't just on high-income earners," he says.

Medicare taxes that could affect taxpayers at any income level include a $2,500 cap on flexible spending accounts, with any holdings above the cap becoming part of taxable income.

Medical deductions are more limited this year than last. Starting this year, taxpayers under 65 years old have to incur medical expenses totaling more than 10 percent of their income before they can begin deducting them.

The limitation is up from 7.5 percent, although that rate that will remain in effect for people over 65 years old until 2016, when it's scheduled to increase to 10 percent also.

Separately from health care-related taxes, base rates on capital gains and qualified dividends have increased to 20 percent from 15 percent for filers falling within the 39.6 percent income tax bracket.

McDirmid recommends that some high-income earners focus on enhanced types of retirement plans to allow them to defer income. "Folks are going to be in a lower income bracket when they retire, we would hope," he says.

Congress early this year not only extended the Section 179 provision through 2013, but expanded the amount that can be deducted. The provision allows small businesses to deduct up to $500,000 for qualifying new and used equipment and real estate.

The bonus depreciation provision enables businesses to write off up to 50 percent of the cost of qualifying new equipment and improvements in 2013.

In the last quarter of the year, as clients form a clearer picture of what their net income is going to be, they'll likely be more aggressive about taking advantage of Section 179 and bonus depreciation provisions, McDirmid says.

Barring congressional action, bonus depreciation will disappear next year, and the 179 provision will revert to $25,000.

Munn says, "We're definitely advising folks if have they have fixed assets they propose to put into service the first quarter of next year, they might consider pushing it up to 2013, and they might be able to expense all of it."

Estate tax and lifetime gift provisions have been made permanent after being subject to wild swings in levels of taxes and exemptions in recent years.

The current individual combined estate and lifetime gift exemption is $5.25 million, and is subject to indexing to account for inflation in subsequent years. Value beyond the exemption is taxed at 40 percent.

That means there's no estate tax on the first $5.25 million of an estate's value, and a person doesn't have to die to transfer assets up to that value tax free.

The estate and lifetime gift exemption is also portable between spouses, meaning if one spouse dies, the other can file to have the unused portion of the estate-gift exemption added to the surviving spouse's exemption for a combined exemption of up to $10.5 million, Cox says.

With such an estate-gift tax structure, most people aren't in an estate-taxable position, he says.

"We're seeing more planning going on so people have a successful transfer of wealth," Cox says.

McDirmid says one advantage of the lifetime-gift exemption is that the transfer of assets prior to death isn't subject to Washington state's estate tax, which is 19 percent on assets valued at over $2 million.

For people at the top of the Social Security wage base in 2013, that amounts to a tax increase of $2,425 compared with a year earlier, according to the Wall Street Journal's online affiliate MarketWatch.

McDirmid adds, "We're starting to see the phaseout of personal exemptions. We're trying to look for a way for privately held businesses to legitimately employ their children so they can claim themselves to get personal exemptions and the education credits that come with them."

Cox says the number of people required to pay the massively unpopular alternative minimum tax (AMT) is growing, even though Congress has permanently indexed it to inflation.

The AMT is an extra tax that some people have to pay on top of their income tax. It's meant to ensure that high-income filers don't escape paying taxes through otherwise allowable credits, deductions, and loopholes.

Millions of middle-income filers have been caught up in the AMT, however.

"I don't think there's a whole bunch of relief," Cox says of the permanent indexing of the AMT. "People are getting into it much quicker. At least 20 percent more folks are hitting that who wouldn't have before due to certain tax breaks."

McDirmid says one tax issue that has rather harsh penalties is failure to report foreign bank accounts with more than $10,000 in assets.

The penalty for such a failure is $10,000, and the penalty can be higher for failure to report foreign bank accounts with more than $50,000.

In a global economy, it's becoming more common for clients to amass $10,000 in assets in a foreign bank.

"To miss filing the information is a big deal," McDirmid says. "You have to disclose the account and where it's at," he says.