Some final rules for 2014 might be written next year 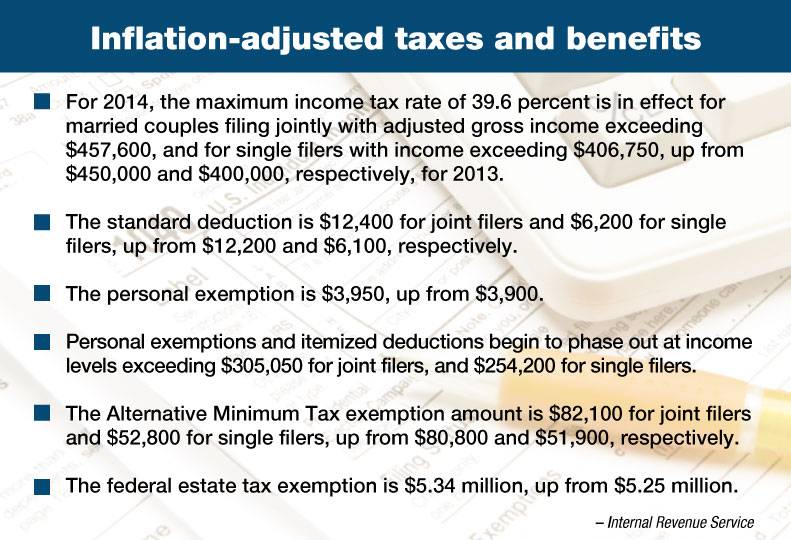 Also, some high-income earners who are still adjusting to tax increases that went into effect in 2013 also might see their tax deductions reduced for 2014, along with additional reporting requirements that go into effect this year and next.

“I would say the biggest issue now is a ton of tax breaks that expired at the end of 2013,” says Jason Munn, senior tax manager at the Spokane office of Seattle-based accounting firm Moss Adams LLP. “A lot of people are thinking Congress might restore them.”

Also under Section 179 rules, the maximum deduction for newly acquired assets has reverted to $25,000, down from a maximum write-off of $500,000 for equipment and real estate purchased in 2013.

“Those were big deals,” Munn says.

Another important incentive that has disappeared is a tax credit that enabled companies to write off research and development expenses, he says.

“The R&D credit had been out there for 20-some-odd years,” Munn says. “Typically, it’s renewed annually, but it’s technically expired, and there’s no R&D rule as of today.”

David Green, principal at David Green CPA PLLC, of Spokane, also says one of his biggest tax-planning concerns is about whether final changes to 2014 tax laws will be delayed until early 2015. Such a delay occurred during the 2012 election cycle.

“When they continue to tinker with things after year-end, it makes it harder to do year-end timing,” he says.

The exemption can be significant for people looking to make a big purchase, such as a vehicle, he says.

However, without knowing whether certain tax incentives will be extended, some consumers might delay making such a purchase, he says.

Another expired provision that some clients are hoping will be extended allowed seniors over 70.5 years of age to donate up to $100,000 from their IRAs without reporting it as income.

“I do have a couple of clients who asked me to let them know if that provision is put back in the tax code,” Green says. “The last time I checked, that wasn’t moving very fast.”

Whenever Congress makes tax-law changes after mid-December, it’s difficult for the IRS to keep up, causing far-reaching repercussions, he says.

“The IRS has a process to issue forms, and software developers have to take the forms and write software to it,” Green says.

“The longer it takes Congress to figure out what happens for 2014, the more it impedes the ability of the tax system to function efficiently. That ultimately hurts taxpayers,” he says.

Andrew McDirmid, a partner at the Spokane office of Fargo, N.D.-based Eide Bailly LLC, says he too anticipates this will be a late-legislation year for tax laws like it was two years ago.

He expects that some tax breaks will be renewed and will be made retroactive to include all of 2014.

“I think we will get those things, but we may not know until November or December and possibly January,” he says.

McDirmid says in recent years taxpayers have been deciding near the end of the year whether to pull the trigger on qualifying expenditures in order to take deductions.

“Not knowing what Section 179 is going to total makes planning a little more difficult for businesses,” he says.

McDirmid says one big change for the 2014 tax year has to do with new repair—or tangible asset—regulations that will affect taxpayers with certain fixed assets.

“The IRS has been trying to create a better understanding for all taxpayers of what expenditures should be capitalized versus expensed,” he says. “Now they’re forcing the issue.”

The concept of expensing generally involves taking a current-year deduction. Capitalizing involves creating an asset for which depreciation might be deducted later or over a number of years.

Anyone with fixed assets or repair and maintenance expenses must file a Form 3115, which serves as consent to comply with the new accounting regulations, he says.

“It’s a big deal that a lot of people are unaware is out there,” McDirmid says. “A lot of work needs to be done with clients between now and the end of the year.”

This year, the federal estate tax exemption is $5.34 million per spouse, and the unused portion of the exemption is portable between spouses when one of them dies, McDirmid says.

“Surviving spouses still have to file and attach a Form 706 to have portability, even for estates below the exemption threshold,” he says. “A lot of people are forgetting to do that.”

In a recent U.S. Supreme Court action that could have tax ramifications, the nation’s high court ruled that inherited individual retirement accounts are subject to creditor claims.

“That was something we though was sacred,” McDirmid says of the inherited IRAs.

The court decision is causing clients to consider alternatives for transitioning IRAs to children and other nonspousal beneficiaries.

“We’re starting to see them distributed through trusts,” McDirmid says, although he adds, “We’re not 100 percent sure how that’s going to work.”

Meantime, Green says some clients still are coming to grips with tax increases that went into effect in 2013.

“Sometimes they were surprised by the magnitude,” Green says, of the 2013 tax increases. “They were aware of it from a conceptual perspective, but it’s a shock to taxpayers for them to go from a theoretical concept to actual dollars.”

High-income earners also are seeing reductions, or phaseouts, of exemptions and deductions that went into effect starting in 2013.

“We’re starting to see a little bit of impact of that as tax preparers remind clients that phaseouts are back in the tax codes,” Green says.

Phaseouts affect certain deductions, including for charitable contributions, mortgage interest, and other itemized deductions. Phaseouts are set at 3 percent of adjusted gross income exceeding $305,050 for most married couples filing jointly and $254,200 for most singles for the 2014 tax year. The maximum reduction of such itemized deductions is 80 percent.

Munn says some businesses here that have foreign vendors could be subject to FATCA reporting requirements.

“They should get their W-8 forms updated,” to ensure they are in compliance, he says.

In regard to the Affordable Care Act, families that didn’t have health insurance for three or more months in 2014 may be subject to a penalty of up to 1 percent of their income or $95 per adult and $47.50 per uninsured dependent up to a total of $285.

Individuals who purchased insurance for 2014 from a marketplace such as the Washington Health Benefit Exchange will receive a new Form 1095 and may be eligible for a tax credit.

On the horizon, additional reporting requirements are set to kick in under the Affordable Care Act regarding whether and what health coverage is available to employees, Munn says.

“Businesses spent the first year trying to understand it,” he says. “Now reporting kicks in.”

Though not much is likely to happen in the way of big tax changes before the midterm elections, Congress is working on tweaking existing rules to make it less desirable for companies to move overseas, Munn says.

That could have far-reaching effects down the road, he says.

“I think it will be part of broader tax reform,” he says.