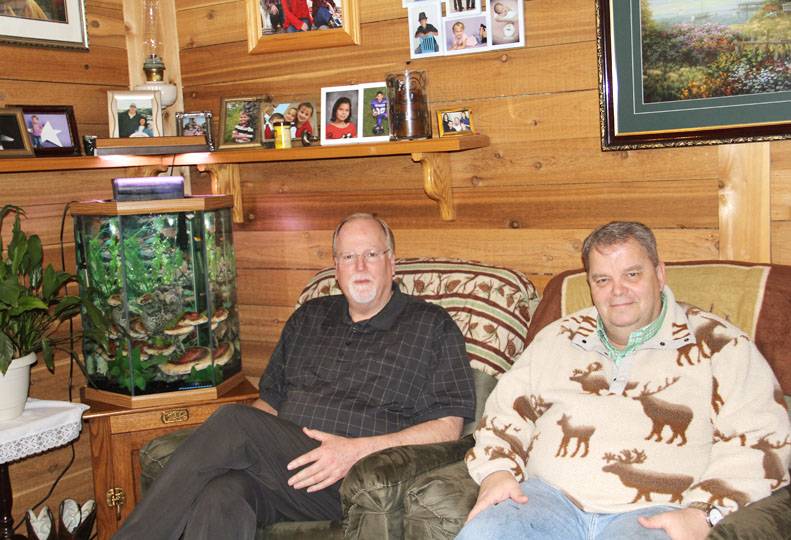 Bennett and Cunningham formed a partnership to open Bennett House. Bennett handles the marketing and promotion for the company, while Cunningham runs day-to-day operations.

Caregivers can drop elderly relatives off at the house, a 1,050-square-foot former U.S. Forest Service cabin at 1095 E. Timber Lane in Coeur d’Alene, while they run errands, go to work, or do other tasks. Elderly clients can play games, watch television, socialize, or just relax at the facility.

Bennett House took in its first seniors Feb. 1. The facility is located in a separate house on the same property as Bennett’s residence, which he has owned for 13 years, he says.

Bennett says, “It’s one of the things we thought was important. Seniors with dementia have a lot of anxiety of new places, so we wanted it to be small and not institutional.”

“We want it to be small; if it gets bigger we want another site,” says Cunningham. “It’s also why the rooms are kind of separated.”

Bennett says the organization is licensed through the state of Idaho’s Department of Health and Welfare as an adult day health provider. The company employs one person in addition to Bennett and Cunningham, registered nurse Julie Turner, and all three have attained certification in first aid, CPR, automated external defibrillator, and medication assistance.

The house can accommodate a maximum of 12 clients at one time. The state requires that any care businesses operate with a client-to-caregiver ratio of 6-to-1, which is another reason for the 12-client maximum.

Bennett House is open from 7 a.m. to 7 p.m. Monday through Friday, Bennett says, and charges clients a flat fee of $64 for an entire day. If necessary, he says it’ll work with clients who might   need weekend hours. Bennett House charges an hourly rate of $8 to $10 for clients who don’t need all-day service, depending on how many hours a client is purchasing at once.

The facility features two main rooms with televisions and easy chairs, as well as a game area for cards, chess, and other activities. It also has a small kitchen and dining table, and offers breakfast and lunch, Cunningham says. He says he and Bennett have a full schedule of games and activities available, but they really let the clients pick what they want to do.

“We’ve probably played 300 games of cribbage this week,” Cunningham says. “We have a ‘don’t ask, just tell’ program,” meaning clients don’t have to ask to do activities, just tell the staff what they’d like to do.

Bennett says that the majority of clients who contact the day care are children and spouses of people with Alzheimer’s disease or dementia who need to run errands or just need a break from the grueling schedule of caring for a loved one day and night.

Bennett claims there isn’t another adult day care facility like Bennett House currently operating in Kootenai County, although several similar facilities operate in Spokane, including Providence Adult Day Health, in the Logan neighborhood north of downtown, and Adult Day Care Spokane, on the North Side.

Adult day care services are popular in other parts of the country, he says.

“No one knows how hard 24/7 care is until they’ve done it,” Bennett says. “We want to prolong the time at home and put off the huge expense of other care. We’re the entry level into the arena of elder care. From here to in-home care, double the cost. From in-home to assisted living, double the cost again.”

Cunningham says, “People are stressed out. If they don’t have this respite, they end up putting relatives in a rest home before they want to.”

The business keeps to daytime hours, Cunningham says, because it’s important for its elderly clients to go home at the end of the day and sleep in their own houses.

The business uses the tagline “An Adult Day Care Center,” and Bennett says that there was some debate about designating the business a day care because of possible negative connotations associated with that phrase. However, that’s what the facilities are called in other states, he says.

“If you were to Google ‘adult day care in Florida,’ 99 percent would have it in their name,” Bennett says.

Cunningham also says they wanted to be sure the day care would be differentiated from nursing facilities.

Bennett got the idea for the business 10 years ago after taking care of his elderly mother, who had Alzheimer’s disease, for the last four years of her life, he says.

“I got a firsthand view of what 24/7 care was about,” he says. “There was no respite care available then. It kind of planted the seed, but it took 10 years for it to come to be.”

One night, Bennett says, he came into the extra house on his property and realized it would be perfect for the day care facility.

“I was sitting in here one night, and I just thought, ‘what a waste,’” he says.

Bennett says he wanted to create a service that would give some relief to caregivers.

“As a caregiver, you carry around a fair amount of guilt,” he says.

Cunningham and Bennett have known each other for 13 years, they say, and the two previously had talked about starting a business together.

Cunningham retired about four months ago from being a partner for 15 years in Absolute Drug Testing LLC, he says. Bennett still owns his biohazard cleanup business, BioGone Hazardous Cleanup & Removal.

“Nothing was more fun for me than sitting down with an 88-year-old, blue-haired woman and getting her Medicare,” Bennett says.

The two got together and came up with the idea for Bennett House, and then began the licensing and schooling required to open an elder-care business.

Both men contend that the elder care industry in general is in desperate need of more day care services like Bennett House.

“There is such a pent-up need,” Bennett says. “The biggest challenge is educating the public; they don’t know we’re here.”

Cunningham agrees, saying, “People don’t know this is an option. Everyone Rick has talked to says how needed this is.”

For the future, Bennett and Cunningham say they eventually want to open a second day care facility.

“This is the prototype,” Bennett says. “Once we get this full, get momentum, we’ll open another one. It just depends on where the need is.”

Both men asset they wanted to start the day care to help the elderly, not to make money.

“For me, it’s about treating people like a friend,” Cunningham says. “I want people to feel like they’re here visiting.”

“We’re both business guys; we know what it takes to make a business work,” says Bennett. “We care about doing the job right. And when we get old, we can stay here.”