Townshend Cellar owner makes wines as he likes them

Winemaker aims for vintages with 'bang for the buck,' plans facility 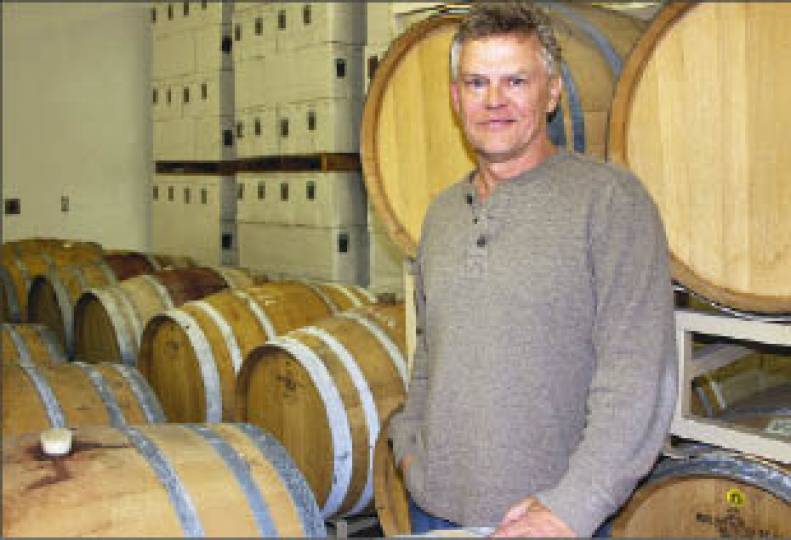 -—Staff photo by Jeanne Gustafson
Don Townshend says he hopes to open an expanded facility for his Townshend Cellar winery in the Greenbluff area next spring.

Spokane winemaker Don Townshend didn't set out to start what now produces more than 20,000 cases of wine annually in the Spokane area. He started out selling air-conditioning equipment to clients around the Northwest, including to Preston Premium Wines in Pasco, Wash. It was at Preston that he got a thirst for the business.

Since 1998, his winery, Townshend Cellar, has grown from a one-man operation to a force in Inland Northwest wine-making, but he says his approach to wine production is straightforward and stems from his early days in the business.

"I always just made wine the way I liked it," Townshend says. "I figured if no one buys it, I'll have to drink it."

Townshend says he became friends with the owners of the Preston winery in the early 1980s, through his work as a salesman of Trane air conditioning equipment. He graduated from college in Alaska just as work on the Alaska pipeline was winding down in the late 1970s, so he took a job selling air chillers and air-conditioning systems here. He still holds that job, while working part time at Townshend Cellar.

Townshend says that over the years, he became interested in how Preston produced its wine, and with help from friends he'd made at the winery, he made his first two barrels in 1995. He liked it, he says, and started production in earnest in 1998.

In 2001, Townshend built his winery facility in the Greenbluff area, north of Spokane, but he's preparing to build a new, larger facility nearby, where he has bought property. The new facility will cost about $500,000 to construct, he says. It will have an 8,800-square-foot warehouse, a 3,300-square-foot tasting room, and a second-floor office area of 2,200 square feet.

Townshend's current facility, located at 16112 N. Greenbluff Road, in Colbert, has 4,800 square feet of space. Pacific Metal Buildings will build the new, stick-frame, two-story building, and Townshend says he hopes it will be completed in spring 2011.

When Townshend got started in winemaking, he enlisted the help of his then-teenaged sons, Michael and Brendan, to produce wines, but Townshend Cellar now employs four people to sell roughly 18,000 cases of wine a year produced at a production facility it leases from Preston, in Pasco. It leases 8,000 square feet of warehouse space there, where it has 190,000 gallons of capacity in its stainless steel tanks and a bottling line that can produce up to 240 cases of wine an hour.

Townshend also recently bought two other local wineries, Caterina Winery, which is located in 10,000 square feet of leased space in the Broadview Dairy building near downtown, and Lone Canary Winery, located at 106 S. Scott, east of downtown. Caterina makes cabernet sauvignon, merlot, viognier, chardonnay, and Riesling varietals, along with red and white blends, he says. He hopes to produce about 7,000 cases of Caterina wines this year, mostly at Townshend's Pasco facility in coordination with his manager there, Dave Harvey. Currently two people are employed at Caterina's tasting room in Spokane.

Townshend now has decided to sell Lone Canary, or to move its retail stock into the Caterina space after the end of May if he doesn't find a buyer before then, and he says Lone Canary wines currently aren't in production. In the past, Lone Canary produced about 3,000 cases of wine a year.

When Townshend bought Caterina, it had a lot of wine aging in barrels. So far this year, he's bottled about 2,000 cases of Caterina wines, he says. Townshend says Caterina's wines are distinctly different from Townshend Cellar's products.

"The reds are a lot younger," he says.

Townshend says it isn't his goal to grow through acquisition, but he had ties to both wineries in the past and wanted to keep them from closing, he says. He says he has no plans to buy additional wineries, but rather plans to focus on developing his planned new facility at Greenbluff.

As long as it's convenient to keep Townshend Cellar's main production facility at the Preston Winery location, he will do so, but he envisions moving it to Greenbluff eventually.

His successes so far lie in ideas that are simple and direct, Townshend says. For example, the label for Townshend's Red Table Wine sports a photo of—what else—a red table. The table in the photo is a simple occasional table from a set that had belonged to Townshend's grandmother. Later, the company added white and pink table wines to its list, and used the same set of nested tables, and photo editing software, for the pictures for each label. A photo-editing program was used to turn the image of a brown table red and pink, but it didn't work well for the white table label, so he painted one of the tables white, he says.

The majority of Townshend Cellar's list of 28 wines retail for between $10 and $20 a bottle, Townshend says. The winery doesn't produce each type every year, and currently makes malbec and viognier wines, which are popular with consumers, but wines come in and out of favor, he says.

Townshend Cellar buys its grapes from around Washington state, and crushes, extracts juice from, and processes the grapes at its Pasco facility. It also does custom bottling work for other wineries. It's using its Greenbluff facility mainly for storage now, though it does have a few tanks and smaller-size bottling and labeling equipment there.

Townshend says he tends to keep his red wines in barrels a little longer than many producers, about 30 months. His wines are sold throughout Washington and North Idaho, with smaller distribution in Alaska, North Carolina, and Arizona.

He thinks his strengths are in his palette, and his ability to blend wines—"I've got a good nose," he says, and adds that smell is the greater part of taste.

He realized that he wouldn't be able to sell just a little bit of wine at high prices.

"I was going to make just a thousand cases a year," he says, but adds that he came to think it would be much better to make more affordable wine, and now says he aims for "a lot of bang for the buck," adding, "It's a darn good product for the price."

Townshend says he believes he was one of the first winemakers here to popularize non-vintage blends, such as T-3, a table wine that has been popular here. Non-vintage blends are combinations of grapes from different years, which Townshend says makes them more robust and consistent, while keeping them reasonably priced.

T-3 originally was made to be a blend for the Fircrest Golf Club, in Tacoma, Townshend says.

"They wanted a wine that you couldn't buy in the store," he says. The golf course helped with the tasting and blending of the combination of cabernet sauvignon, merlot and cabernet franc, he says.

"It made it mysterious that you had to get it in the winery or at a restaurant," Townshend says. He says that ultimately, however, the business was told by the Washington state Liquor Control Board that it couldn't withhold stock from other venues if it had enough in inventory to sell.

Including grapes from three different years helped make the blend more consistent and better, he says.

Originally, T-3 got its name because it reflected a golf motif, but it also had the juice from three types of grapes, grown in three different vintage years. Add that the three Townshend men, Don Townshend and his two sons, did much of the work to produce it, and he once toyed with the idea of calling it T-3 cubed, or something like that, he says.

As has seemed to be the case with his other successes, keeping it simple worked, and T-3 helped popularize non-vintage wines, Townshend says.

Now, about 80 percent of Townshend's sales are through retail outlets, and about 20 percent through restaurants, Townshend says. He says that because Townshend Cellar prices its wines well, its sales have stayed steady during the downturn.