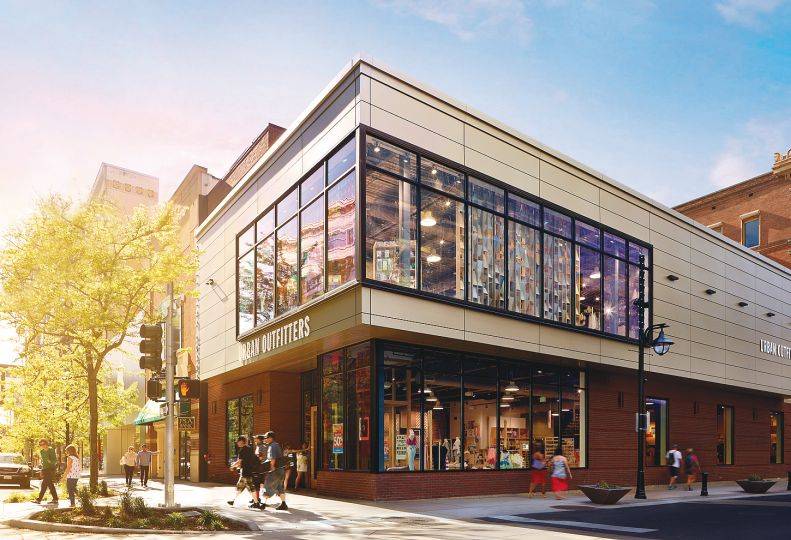 -—ALSC Architects PS
The retail structure located at the northwest corner of Main Avenue and Wall Street in downtown Spokane was recognized through the 2017 Spokane Mayor’s Urban Design Awards for its “inherrent flexibility and connectivity.” An Urban Outfitters store anchors the building, which is also occupied by a combined Spokane Teachers Credit Union branch and Rocket Bakery.

ALSC Architects PS and Centennial Properties Inc., both of Spokane, won the top honor in the 2017 Spokane Mayor’s Urban Design Awards for an expansion and remodel project at a retail building now anchored by Urban Outfitters downtown.

ALSC also was recognized for two other designs among seven total awards.

The top honor, the Mayor’s Choice Award, recognizes the design for the Urban Outfitters structure, located at the northwest corner of Main Avenue and Wall Street.

The design extends the brick elements from surrounding historic buildings and transitions to a streamlined, contemporary aesthetic of newer construction on the east end of the Riverfront Park Square shopping mall, says Omar Akkari, an urban designer for the city of Spokane.

The building also is occupied by a combined Spokane Teachers Credit Union branch and Rocket Bakery.

“A result of the design is inherent flexibility and connectivity,” he says.

A large urban Spokane-themed mural on an interior wall of the Rocket Bakery and STCU tenant space is visible from the street, adding to the artistic character of the downtown block, he says.

Centennial Properties is a subsidiary of Cowles Co., which also owns River Park Square and the Journal of Business.

ALSC also was recognized with an Urban Design Merit Award for the Spokane Transit Authority Plaza renovation, which was cited for improving safety and user experience by restructuring public spaces within the building.

A second Urban Design Merit Award was presented to SPVV Landscape Architects, of Spokane, for its work with the Washington State University Spokane Pharmaceutical and Biomedical Sciences Building and plaza, providing exterior campus connections to the Nursing and Health Sciences buildings.

Kevin Twohig, CEO of the Spokane Public Facilities District, was awarded the Creative Citizen Award for his longtime work with the district. Twohig, who has led the PFD for 16 years, has announced he will retire at year-end.

The South Perry Business District was bestowed the Heritage Project Award as a model for walkable neighborhoods and pedestrian-oriented development.

“The district is important to the city’s legacy,” Akkari says. “Everyone talks about the Perry District when they talk about revitalizing a neighborhood.”

The People’s Choice award went to plaza vision plan incorporated in a combined sewer overflow project that will be constructed west of City Hall and just north of the Spokane Public Library.

The public plaza will be constructed above a 2.2 million gallon underground concrete tank. It will have accessible spaces and an overlook structure to provide views of the Spokane River. It also will include a water feature, benches, accent lighting, and public artwork illustrating the Spokane River’s historical and cultural importance to the Spokane Tribe of Indians.

The design team for the plaza is Los Angeles-based AECOM; Garco Construction Inc., of Spokane; and Bernardo|Wills Architects PC, also of Spokane.

The Boone Avenue Retail Center, another ALSC-designed project that’s located near the Gonzaga University campus, received the Shrinking Lilac Award, which is bestowed to a project not submitted for an award, but considered by the city’s Design Review Board as example of design excellence.

“It’s got a pedestrian feel to it,” Akkari says, adding, “It fronts the street and hides a 400-space parking garage well.”

The City’s Design Review Board evaluated submissions using 10 desired qualities of urban design and provided recommendations to the mayor’s office.

The winners were announced Oct. 25 at an event held at the Saranac Commons building downtown.