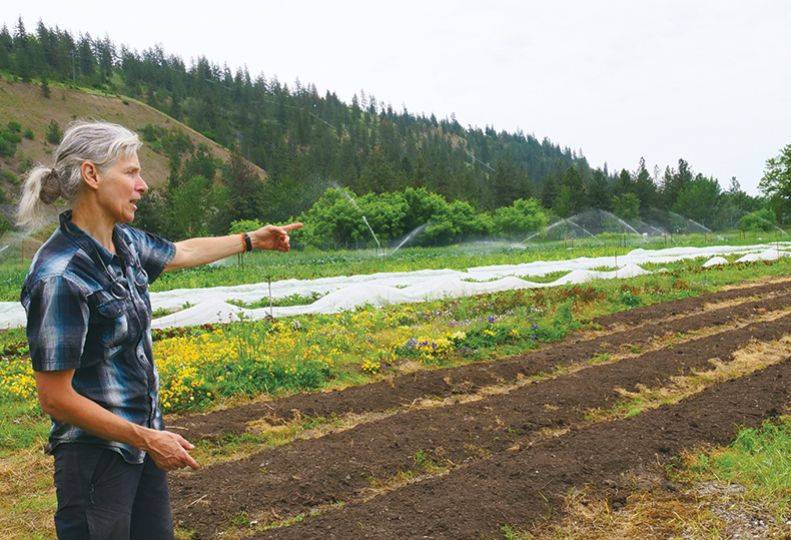 On a 40-acre parcel of land tucked along the west side of Latah Creek where sounds of flowing water and chirping birds create a calm atmosphere in the historical farming neighborhood, Vinegar Flats Farm is in the middle of an important transition.

Tarawyn Waters, operations manager for Vinegar Flats Farm, at 2121 S. Cherry, says the operation is becoming a 100% no-till operation, which is expected to improve the nutrients in the land and increase crop yields in the coming growing seasons.

“I want to farm like that. It’s kinder to the earth,” Waters says.

Vinegar Flats farmer Ollie Gluskin says no-tilling is a farming technique that allows farmers to grow crops without using the traditional method of agitating or disturbing the soil by plowing, or tilling.

It works by mowing down leftover plant material from crops and leaving the cuttings in place. Tarps are stretched over the soil to quicken the breakdown of plant material, either through light deprivation or by heating the soil to a high enough temperature to encourage decomposition.

“Clear tarps are for solarization. After a lettuce crop, we would mow it, put a solarizing tarp on it, and within a few days usually you can see everything start to die,” Gluskin says. “The tarp heats it up and kills and burns it. We also have black tarps out here that are for light deprivation, another way to kill things without tilling them up. The technical term is occultation, and that takes longer, about three to four weeks.”

Waters says when the soil is ready the seeds are planted using an EarthWay garden seeder.

The farm grows mixed vegetables from March through November, and the transition to the no-till technique shouldn’t affect the growing season, Waters says.

Waters says it’s important for the farm to have a diverse range of produce to benefit the land as well as the community.

“What’s happening in our world is we’re losing diversity in our foods. The stuff you can actually get at the grocery store is about 12 things,” Waters says.

She adds that it’s important for small farms to grow diverse crops and not to be constrained to monoculture farming.

More crop diversity adds a wide variety of plant matter that eventually will break down and get reintroduced to the soil through the no-till method. She says the transition is necessary for the health of the soil. It’s also personally important to her.

“I’m a steward of the soil, and when you till, you rip up all the soil biomes. Everything that’s going on just gets ripped up and removed,” says Waters, who operates the farm for owner Jim Schrock, of Earthworks Recycling. “What we’re learning more and more is how important it is to keep things intact.”

Waters works alongside a staff of three farmers, including Gluskin, Morgan Brown, and Laura Reilly.

Gluskin says the no-till method also helps the environment because “agricultural tillage is the second source of carbon release into the atmosphere. All these plants go down into the soil and store carbon in the soil. When we till it up, we’re breaking it all up, decomposing the organic matter quickly, and releasing those gases into the atmosphere.”

Reilly adds, “Tilling honestly makes our jobs harder in the long run, because it constantly replenishes the weed seeds in the soil and brings them back to the surface.”

In addition to carbon capturing, the no-till method uses less water to grow crops because the organic matter in the soil is efficient at retaining moisture.

Waters says this season’s crops are a scaled back version of what was previously offered at the farm to allow the team to focus on mastering the no-till technique. Out of the 40 acres available, this season’s produce only covers about 3 acres of land.

Through the learning curve and hard work needed to transition, business is good and growing so far this season, Waters says.

She says the farm’s revenue is trending upwards but declines to disclose annual revenue figures.

“This year we’re focusing on creating our systems and implementing them and not trying to spread ourselves so thin,” she says. “Once we do that, absolutely we’re going to expand. We kind of started this farm backwards, we started really big, and now we’re taking it down. This year is about transitioning and learning and getting all the techniques down.”

Vinegar Flats Farm started the no-till method growing garlic in late 2020. Waters says that ideally, the farm will have transitioned completely by the 2023 growing season.

Once complete, they estimate the no-tilling method will take a few years to see improved crop yields.

Reilly says, “Watching other farms that have done this, it seems like the first few seasons you’re still battling the same weed pressure you’d normally see when you till. But after they get their systems down and build the soil and make it healthier, they’re able to reduce weed pressure. Being able to remove that would make our jobs more productive and easier, and it seems like it takes a few seasons to get that benefit.”

She adds that the farm is about two thirds of the way to becoming 100% till-free.

Brown adds that all the crops grown with this method have responded well to the technique so far. More practice is needed for in-ground crops such as potatoes and artichokes, though.

Waters says the transition has been more expensive initially due to growing labor costs, but the farm is saving money on fuel expenses and expects the costs to even out in the future, saving both money and resources.

Vinegar Flats Farm also operates as a Community Supported Agriculture farm. CSAs are made up of community members who pledge support to a farm by purchasing a share of the production at the start of each growing season. Those members pay $450 each and receive a box of five to six different vegetables each week, June through October.

The farm benefits from capital at the beginning of the season instead of only generating income after the crops are harvested and sold.

Waters says, “Immediately, I have money to pay people to work. It’s a way for farmers to be supported.”

There are 40 members of the CSA, which Waters says is more manageable than last year’s total of 110 members.

Both Gluskin and Waters say the community benefits from learning about what’s currently in season and the CSA offers a convenient way for people to try produce they might not have had an opportunity to try before.

“People are kind of out of touch because supermarkets provide everything,” Waters says, laughing. “We don’t have cantaloupe in March.”

The farm’s vegetables and greens also can be purchased at the Spokane Farmers Market, which is open on Saturdays and is located at 20 W. Fifth, between Division and Browne streets, in downtown Spokane.

Produce from the farm also is sold to a number of Spokane-area restaurants, including Boots Bakery LLC, Allie’s Vegan Pizzeria LLC, Inland Pacific Kitchen, Gander & Ryegrass, The Grain Shed, Table 13, and The Scoop, which uses the farm’s edible flowers on some menu items.

“I love this farm, and it’s very valuable to the community,” Waters says. “Diverse vegetable farming is a very hard way to make money. You can get pulled to do so many different things, but we’re figuring it out.”