Nonprofit wants to increase its enrollment in Eastern Washington 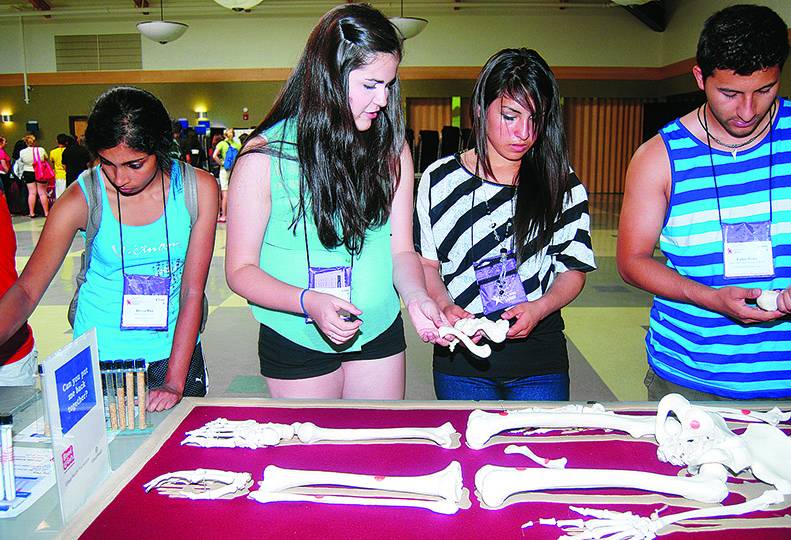 For Washington Business Week and its backers, the key for continued growth of its business and economics programs lies in increasing the number of participating teenagers from Eastern Washington, where it has been lacking over the years, says executive director Stephen Hyer.

Hyer, based in Federal Way, Wash., says program enrollment, which topped 800 students last year, has been flat over the last several years. He's hopeful that trend will change as it begins looking at ways to increase the number of students enrolling in the program from this side of the Cascades.

The Foundation for Private Enterprise Education is a 501(c)3 organization that operates Washington Business Week, a program cofounded by the Association of Washington Business. AWB is a statewide organization with more than 8,000 members that collectively employ more than 700,000 people. Washington Business Week holds four week-long programs at four colleges across the state, including one at Gonzaga University. Programs are geared toward giving high school students a chance to work on business, communication, leadership, and other career-development skills. Program topics include health care, agri-business, manufacturing, and business, which is its most popular and longest-running program, Hyer says.

"From the business perspective, it's helping kids understand the value and importance of business, and that's critical for all of us," Hyer says.

Bryce Wilkinson, a Spokane-based vice president of U.S. Bank who's serving as chairman of Washington Business Week's board of directors, says, "Our goal as the board is to hopefully double the students that we're bringing into the program, and a big focus will be Eastern Washington, because we know it's kind of an untapped market here."

At Gonzaga, about 200 participated last year. However, of those, only 15 percent were from Eastern Washington, he says.

Wilkinson was introduced to Washington Business Week about a decade ago, taking part in the program at Gonzaga as an adviser. He says that during the last 10 years, enrollment in the programs from Spokane has typically ranged between 30 and 40 teens annually, adding that in 2004, the enrollment numbers countywide hit an all-time low of nine students.

He says the low enrollment numbers on this side of the state stem from a lack of awareness in the community about the program, and adds that with the program headquartered on the West Side, it's been an easier task to recruit from that area.

Wilkinson says although all students who enroll in the program can attend at any of the program locations, many of the students from Spokane choose to attend Business Week at Gonzaga, with a handful selecting one of the other three colleges in the state.

"At the end of the day, we don't really care whether they go to Gonzaga or Western Washington. It's getting them into this program," he says.

Hyer says, "By working with a group of 10 kids, they really get to practice their own team building and interpersonal skills with these kids."

About 110 volunteers statewide work as company advisers annually, and they're recruited from the area where the program takes place.

"When (students) arrive on campus, we put them into teams of 10 kids, and each team has a member in the business community as a mentor," Hyer says.

Throughout the week, students are shuffled between team building exercises, guest lectures, and meetings, culminating in a trade show on Friday, where teams showcase new products and marketing strategies for their company.

"What we're really trying to do is develop those interpersonal skills and communication skills," Hyer says.

The program also enables students to live a college-type lifestyle for a week, Hyer says, with teens staying in dormitories and eating in dining halls.

"By going to Gonzaga's campus, or Central ... it really helps those kids who were questioning whether they should or could" go to college, he says.

Hyer says the program is funded largely through student fees, which typically run $455 per student, and corporate sponsorships, including by Microsoft Corp., Boeing Co., and PEMCO Insurance. He says the organization offers financial assistance on a sliding scale, adding that last year it covered about $70,000 in fees through financial assistance.

Hyer says the organization has been successful in fundraising for the events, but finding interested students has been more of a challenge.

Washington Business Week has an operating budget of about $1.2 million, up about 5 percent from last year, Hyer says. The organization employs 10 people full time on the West Side, including a recruiter it hired last fall from Gonzaga, who goes to high schools to drum up interest.

It has between 400 and 500 volunteers who participate in its summer programs and in in-school programs that are mirrored after the summer Business Week events but take place at high schools during the school year.

Hyer says the overall cost to host a teen at its summer program on a college campus is about $1,200, which is largely covered by funding it receives from sponsors.

To host a program for a week at a university, the organization spends between $70,000 and $100,000 at each of the four locations annually.

In addition to Business Week, which has been the primary program for the organization since it started in 1976, it hosts four other summer programs that focus more specifically on energy, health care, manufacturing, and agri-business. All four programs were added within the last six years, with the newest program, agri-business, added last year at Central Washington University, Hyer says.

"So many people look at manufacturing and think it's dirty, dangerous, and dumb," Hyer says. "When actually many manufacturing jobs are pretty high tech."

Of the newer programs, Hyer says all run off of the original Business Week model and have a business focus, but the curriculum enables high school students to look at careers in other growing Washington industries. He says early exposure to different possible careers helps students narrow down what industry they would like to enter later.

Since the organization was founded, 16 other states have started separate business week programs based on the one here. Washington Business Week also offers four programs in Poland, which are staffed largely by the organization here, but are paid for mainly by companies in Poland.