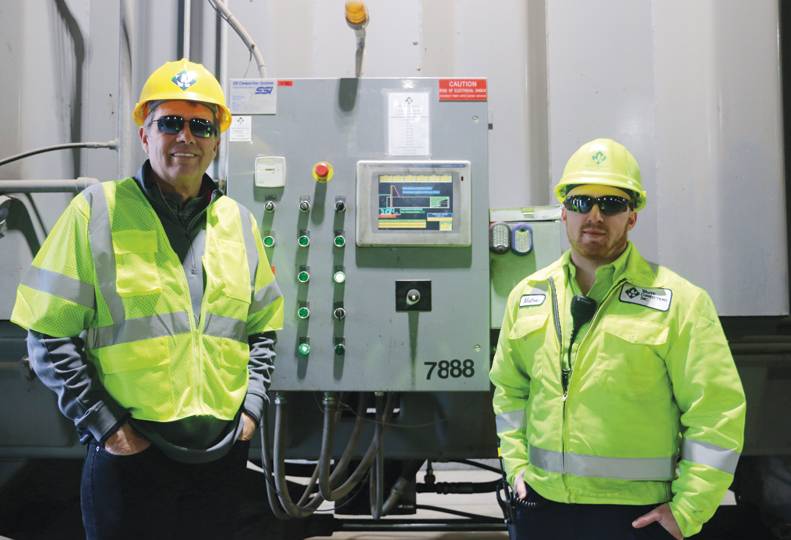 Green waste, which includes organic materials like food and yard debris, is steady despite an uptick of wreckage sent to the stations following the infamous November 2015 windstorm here, says Stansberry.

The company has 19 full-time employees, eight based in Colbert and 11 in Spokane Valley.

Transfer stations are places people can drop off materials such as trash, recyclables, and household hazardous waste. At the stations, those materials are moved to large trailers and sent to different
facilities.

For example, municipal solid waste is incinerated at the Spokane Waste to Energy Facility, on the West Plains. Green waste, which includes organic materials like food and yard debris, heads to Barr-Tech LLC, a composting business, and recyclables are sent to be processed at the Spokane Materials and Recycling Technology Center, which is operated through Waste Management Co.

Waste Connections of Spokane handles commercial and residential waste, including some waste management for the city of Spokane. The company also offers self-haul, recycling, and green options. It also handles white goods, such as refrigerators, clothes dryers, and air conditioners.

The company also has two household hazardous waste buildings, one at each transfer station here, that are open on Saturdays and Sundays only.

Household hazardous waste is handled by a subcontractor and is transported to various locations depending on the item, he says.

Waste Connections of Spokane opened its local facilities in November 2014, when the county purchased the transfer stations from the city of Spokane, which had put the sites up for bid for subcontractors.

“I guess we were the low bidder, potentially,” says Stansberry, “but we were the most qualified candidate to manage the facilities.”

The 2018 rates for the transfer station went into effect Jan. 22. For both transfer stations, the minimum charge for garbage is $17 up to 300 pounds and $10 for “clean green” up to 320 pounds. Those figures include a $2 environmental program charge Spokane County implemented this year, he says.

Pricing rises incrementally until it hits a ton, says Stansberry.

For heavier loads, Spokane County charges $104.50 per ton plus an additional $2 per vehicle to cover the new environmental programs charge.

In 2017, rates were similar, but the minimum charge for green disposal was $1 less, he says, and the 2017 rates didn’t include the EPC fee.

Stansberry says people can drop off recyclables at no charge.

“A lot of people just come in to recycle,” he says. Waste Connections doesn’t weigh customers’ recycling loads and only weighs those materials when the company prepares them for processing.

He also says the household hazardous waste drop-off is free as well.

Companywide, the publicly traded Vancouver, Wash.-based Waste Connections Inc. reported a net income of $262.3 million for the nine months ended Sept. 30, 2017. That figure is up from $161.6 million from the same period in 2016.

However, China, which receives most recyclables, has launched its new National Sword policy, a new ban that targets several sorts of international recyclables.

Stansberry, who also oversees Empire Disposal Inc., a Colfax, Wash.-based Waste Connections operation, describes the company as an environmentally safe and sound business. Although trash is burned, that process reduces the volume of materials by 90 percent, extending the life of landfills.

The company also has a compliance team for environmental safety as well, he says.