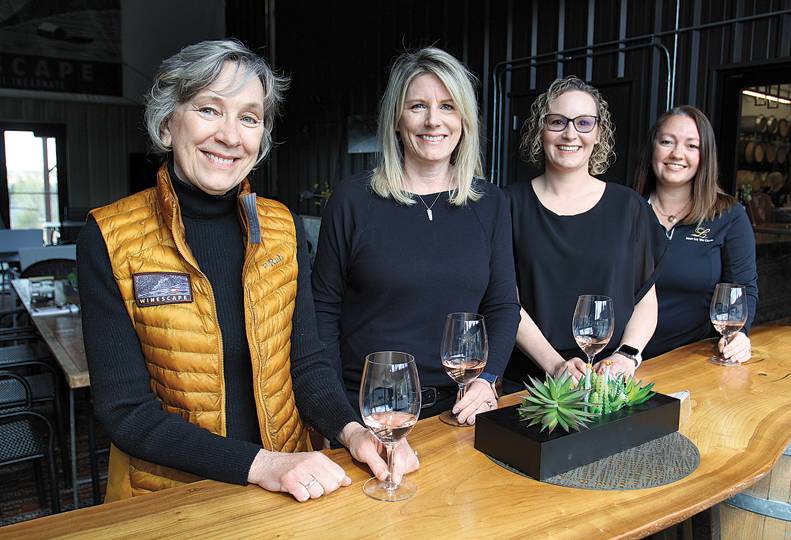 The Spokane Wine Association is led by four women wine professionals who are working to elevate awareness and appreciation of the local wine industry, says Patricia Butterfield, owner of Winescape Winery and this year’s SWA president.

By creating events that bring people together around wine, meeting people where they are in their wine knowledge, and reconfiguring facilities to the ways people want to socialize, the SWA board and its members hope to create a path toward wider community engagement around the Spokane wine industry.

SWA has 16 members and was established in the 1980s by Spokane Valley-based Latah Creek Wine Cellars founder and owner, Mike Conway. Today, his daughter Natalie Conway-Barnes, also a winemaker with Latah Creek, sits on the board as an adviser to the new president. Denise Hendricks, of Helix Wines, is the SWA board secretary and vice president. Sarah Lathrop, of Liberty Lake Wine Cellars, is the board’s treasurer.

According to the Washington State Wine Commission, wine has an annual in-state economic impact of $8 billion, with 1,050 wineries operating statewide. Of those, 90% are small, family-owned wineries that produce fewer than 5,000 cases a year.

Also, according to the commission, 11% of those wineries are female-owned, and 18% have women in ownership or winemaking roles.

Butterfield contends, however, that she is seeing generational and gender changes in wine that can be seen as a renaissance of women’s empowerment in the industry.

“We want wine to be representative. That’s something that our board brings to the forum—wine as representative of Washington and the people of Spokane,” says Butterfield.

One aspect of wine that the board has taken into consideration is the way that people are interested in meeting and learning about wine.

Conway-Barnes, who has been learning winemaking from her father since 2004 and is poised to take over the family business, sees a shift from people meeting in coffee shops to socialize, to convening in wineries.

When Latah Creek, located at 13030 E. Indiana in Spokane Valley, remodeled in 2019, the interior designer conducted a poll of millennials asking what it is that they look for when they go wine tasting. What the designer found was that people were interested in socializing and connecting with others about their experience, which led to Latah Creek adding community tables, says Conway-Barnes.

“People want to not just taste the wine; they want an experience with their wine,” she says. “They want to taste it but talk and be among people and socialize.”

A few years ago, Hendricks started the event series Women, Wisdom, and Wine, which invites women, and anybody interested in wine to attend cultural and educational lectures.

“It’s been really fun and an opportunity to bring women together,” says Hendricks.

Butterfield also adds that at Winescape, located at 6011 E. 32nd, a weekly book club meets to discuss what members are reading while enjoying wine.

The group also has been trying new events, says Conway-Barnes. In March, which was Washington Wine Month, SWA held a month-long promotion of member wineries, passing out cards much like the punch cards that are given in coffee houses. After visiting five different wineries, guests were entered into a drawing for gift cards.

She says the promotion was well-received.

“We’re continuing to do it in August and next year to promote visiting the wineries and for people to see what is produced just five minutes from your house,” she adds.

In addition, all board members take part in informal teaching of the complexities of wine, and they’re considering starting classes or workshops to encourage more community involvement.

At the Helix Wines tasting room, which is located at 824 W. Sprague, across Sprague Avenue from the Historic Davenport Hotel, Hendricks takes part in educating visitors about wine and distributing winery maps.

“It’s really fun meeting people where they are and explaining the different varietals. And they enjoy it,” she says.

Because Spokane isn’t situated where vineyards are located, it isn’t always thought about as a wine destination, says Conway-Barnes. In addition, she adds that Latah Creek has been in business for 40 years and she still runs into people who don’t know there are wineries in Spokane.

Although one goal of SWA is to promote Spokane-area wines outside of the area, Conway-Barnes says, “I’m not sure you can get to that point until you let people in Spokane know there are wineries in Spokane.”

The wine industry is an economic driver, statewide, nationally, and internationally, says Butterfield. The SWA, she asserts, represents a collective of wineries that are interested in engaging with the citizens of Spokane to inform them that a great place for winetasting is right here.

“There is massive scale, variety, and award-winning wine here in Spokane,” says Conway-Barnes.