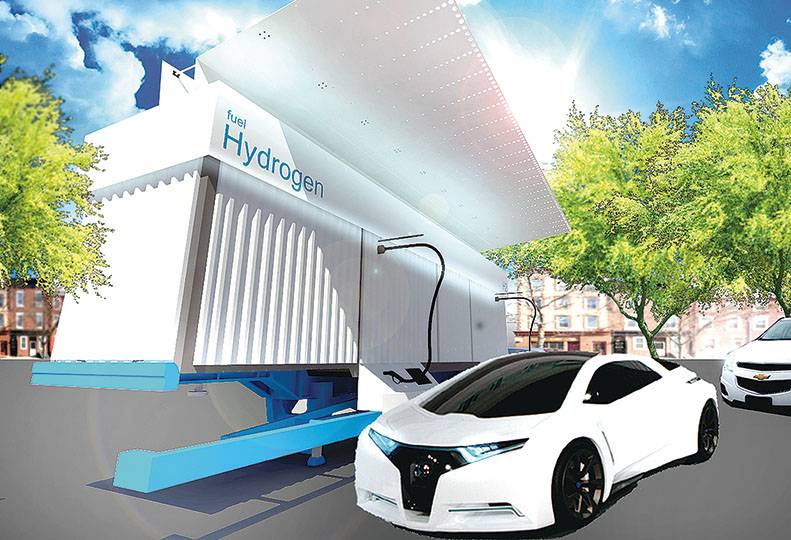 A group of Washington State University students has designed a plan for an innovative and economical fueling station that it believes could help make environmentally friendly, hydrogen-powered cars a viable option for future transportation.

The idea took first place earlier this month in an international hydrogen design competition against teams from Asia, Europe, South Africa, and North America. The award was announced at the 2014 Alternative Clean Transportation exposition in Long Beach, Calif.

While such cars exist, they haven’t been popular primarily because of a lack of available infrastructure to support them. Only a handful of hydrogen gas stations have been built in the U.S., and they cost $2 million to $4 million to build.

At least three car makers have said they plan on selling such vehicles in the U.S. in the next year.

“Hydrogen is everywhere,’’ says Ian Richardson, team leader on the WSU project and a graduate student in the university’s School of Mechanical and Materials Engineering. “You can get it from anything, and the emissions of fuel-cell electric vehicles are just water.’’

The competition called for students to create a fueling station that would be low cost, easy to permit, low maintenance, transportable, and readily mass produced. It needed to be able gas up a vehicle with five kilograms of hydrogen fuel in less than five minutes—enough for a car to travel 300 miles, or equivalent to what current gas stations provide.

The WSU team’s fueling station design was touted as safe and reliable while also lowering building costs of current stations by 75 percent.

Conducting an economic analysis, the students determined that filling a hydrogen fuel tank to go 300 miles would cost about $48, which is comparable to regular gasoline. They developed a business plan in which a portable hydrogen fuel station could work in conjunction with existing gas stations in a way that would benefit both entities.

“The design the students developed looks to be completely implementable right now,’’ says Jake Leachman, assistant professor in the me-chanical and materials engineering and an adviser on the project. “We want to build one, and we should. The business model/idea is innovative and could lead to a startup company.’’

Students from around the world who are conducting research in hydrogen for energy uses participate in the competition. WSU took second two years ago.

“We were going up against the best of the best,’’ Leachman says.

Judges for the competition said the WSU students had come up with an “innovative design with potential for implementation in the near future’’ and that they “made a strong case for liquid hydrogen delivery.”

In addition to Leachman, civil eng-ineering professor Liv Haselbach ad- vised the students. Haselbach worked on development of one of the first U.S. hydrogen fueling stations.

“We are very proud of the WSU team for the recognition of their design of a drop-in, modular hydrogen fueling station,’’ says Michael Kessler, director of the mechanical and materials engineering school. “Their design, which addresses critical design needs for practical, safe, and economically feasible fueling stations for next-generation hydrogen vehicles, is timely and important.

“Since hydrogen fuel is a zero-emission fuel, this work fits naturally in WSU’s initiatives in clean technology,” he says.