Spokane-area golf season is off to early start

Some courses open ahead of schedule thanks to favorable weather 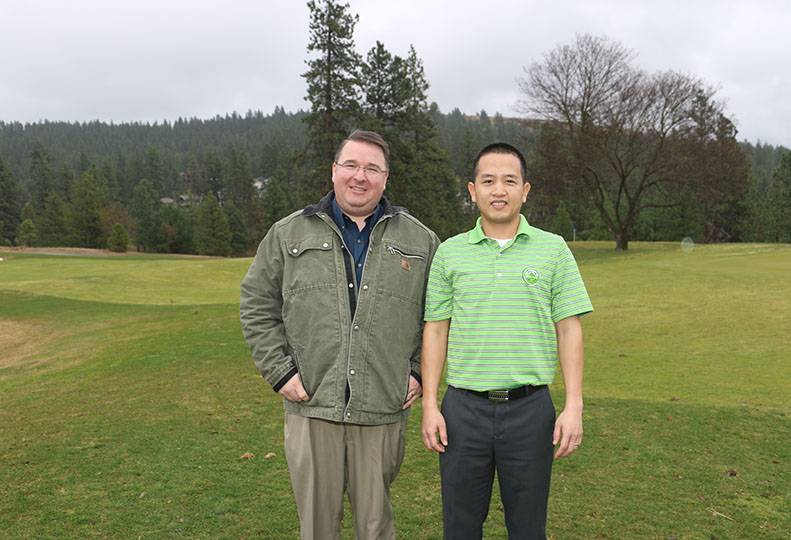 With an unusually warm winter and spring, several golf courses around Spokane have opened early or at least on schedule, representatives for county, city, and private clubs here say.

Nautice Pham, finance manage for Spokane County Parks, Recreation, and Golf, says the county opened Liberty Lake Golf Course on Valentine’s Day, its earliest opening in recent history, and it was open for about 10 days before weather forced it closed again.

Doug Chase, the county department’s director, says that Hangman Valley also opened nine holes of its course early for a few days, before also closing down due to a cold spell.

“We had a lot of folks turn out for that time,” Chase says.

Pham says all three of the county’s courses, Liberty Lake, MeadowWood, and Hangman Valley, were opened for the season on March 6.

“We’re encouraging nine-hole play, with the general demographic not having as much time as they used to,” he says. On average, it takes a player 4 hours and 20 minutes to play 18 holes, Pham says.

The county’s junior rate, which is $15 for either 18 or nine holes, has stayed the same for eight years, Pham says. Also, in the month of August, juniors can play for free at any of the county courses, as long as they’re accompanied by a paying adult, Pham says.

New for this year, the county has introduced its “Replay 18” price, Pham says. Golfers can play at any Spokane-area golf course, including county courses, and get a discounted rate for 18 holes at any Spokane County course the same day. The rate is $24 on weekdays, and $26 on weekends and holidays.

“We’re hoping for the same or more (this year),” Pham says. “It’s really hard to forecast rounds because it’s all weather-dependent.”

Chase says the county is hoping for a similar season to last year.

“We’re starting out this year with the new sand in the MeadowWood bunkers,” Chase says, referring to a $350,000 county project to replace 4,000 tons of sand in 56 bunkers at the course last year. “We’ve had very nice, positive feedback on that … folks are very pleased to not be hitting rocks with their favorite clubs in the sand traps.”

For this year, the county has two major projects, Chase says. One is to build a new storage building that would serve both Liberty Lake and MeadowWood golf courses, and the other involves constructing an addition to a maintenance building at Hangman Valley.

“It’s these types of investments that, quite frankly, keep the cost of maintenance in check,” Chase says.

Pham says that, also new for this year, the county plans to add a page to its website that will have photos of current course conditions.

The county has 11 full-time maintenance staff at its courses, Pham says, and between 50 and 60 seasonal employees.

Meanwhile, the city of Spokane has three of its four courses open, says Al Vorderbrueggen, the city’s director of recreation. Downriver, Esmeralda, and the Creek at Qualchan all opened in mid-February, Vorderbrueggen says.

“Indian Canyon always rebounds less quickly from the winter, because of the south-facing slopes (which don’t thaw as quickly),” he says. The city doesn’t have an exact opening date for Indian Canyon yet, Vorderbrueggen says.

The city has a golf budget of $2.85 million, roughly the same as last year, he says. It’s hoping to achieve $3.1 million in revenue.

The city’s rates also are unchanged from last year, Vorderbrueggen says. For adults, playing 18 holes on a weekday costs $29; weekends and holidays are $32. Playing nine holes costs $21 on weekdays and $32 on weekends. The city’s junior rate is $13. The city also has a sunset rate of $13. The times and days for that rate vary by course, but are meant to try and fill up the later hours of the day.

Vorderbrueggen says the city sees about 140,000 rounds per year, on average.

“I think with the early start to the year … and just getting the spring off to such a roaring start, we anticipate it’s going to be a great year for Spokane golf,” Vorderbrueggen says.

The city has eight full-time employees, two at each course, Vorderbrueggen says. Each course also has between six and 10 seasonal staff, he says.

The city doesn’t have any plans for major golf capital projects this year, Vorderbrueggen.

“It’s earlier than normal,” he says. “Our goal is always to try and be open by March 1, but that doesn’t always happen, obviously.”

Prugh, who’s been the pro at Manito for over 33 years and will be retiring April 1, says the club has had a busy spring. It also doesn’t close its driving range during the winter, he says.

“The driving range has been packed all February and March,” he says.

The club sees an average of about 25,000 rounds per year, Prugh says.

“It would sure seem like we’re going to exceed that,” he says. “We could have a crummy April and May, which are important to us, but we’re ahead of that at this point.”

“Membership is really good and stable, which has been a challenge in the private country club business in previous years,” he says.

Prugh says he anticipates the club will have a good year.

Prugh says Manito doesn’t have any major capital projects this year, just rebuilding some tees and making some improvements to its golf cart paths.

Also gearing up for the spring season is The First Tee of the Inland Northwest, the Spokane-based chapter of the St. Augustine, Fla.-based national youth development nonprofit The First Tee.

“We try to teach students skills that correlate to school, home, and life in general,” she says. “For example, goal setting, respect, responsibility, courtesy … integrity, and honesty.”

Parker says the organization uses the etiquette commonly used in golf to teach the kids these skills.

“It’s kind of hiding the vegetables in the chocolate cake,” she says. “Kids come to learn golf, be outside, be in a caring space with adults, and build skills that help them at school and home along the way.”

The organization runs eight-week sessions in the spring and summer, and a six-week session in the fall. The kids play once a week, Parker says.

Youths between the ages 7 to 17 can participate, Parker says. All kids start at the “player” level, regardless of age, she says, before moving up to other levels: “par,” “birdie,” and finally “ace.”

“It kind of works like martial arts; they test up to move on,” she says.

Each class caps at 16 kids, she says. There’s a head coach, who trains with the organization, as well as several volunteers to run “crowd control,” Parker says.

The First Tee, which launched here in 2011, runs programs at Highlands Golf Course in Post Falls, Deer Park Golf Club, The Creek at Qualchan, and Esmeralda.