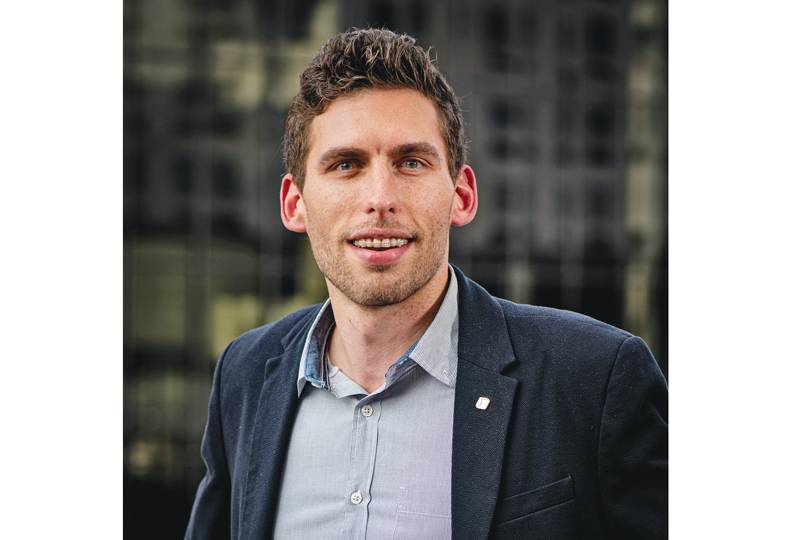 It’s not just about the numbers for banker James Krejci. It’s about the relationships.

“You have to be able to manage the interaction with customers and the people side of it, but in order to do it very well, you have to understand the numbers side, and so that’s where I think you get a successful banker,” he says.

Krejci, 30, is a vice president and commercial relationship manager with First Interstate Bank in downtown Spokane.

As a commercial relationship manager, his goal is to develop long-term connections with businesses.

“The very first time I meet a leadership team from a business, I’m not coming in with a list of products I’m trying to sell them. I’m learning about their business,” he says. “There’s a certain trust that’s built there.”

Krejci also likes to come up with unconventional ways to connect with people. For example, he has produced a business-focused podcast called “Irons in the Fire” since May 2018.

He grew up around welding and fabrication shops, which contributed to his interest in manufacturing and business. He also listens to podcasts.

“When I got into commercial banking, I thought about several industries I was interested in supporting, and manufacturing was definitely one of those,” he says. “When I started touring companies, I realized they are very good at what they do, but not always very good at telling their story. I thought it would be fun on the side to start this podcast for these awesome companies in Spokane, to tell their story.”

The podcast bridges his hobbies and passions, he says.

Episodes of Irons in the Fire have involved Pearson Packaging Systems, of Spokane; MacKay Manufacturing Inc., of Spokane Valley; Ground Force Worldwide LLC, of Post Falls; and Tedder Industries, of Post Falls, among others.

“I’ve always been really interested in leadership. I listen to various podcasts on leadership,” he says. “I kind of saw an opportunity to give people in Spokane some leadership content from great leaders here in the area. … I meet up with various leaders in the community, and I try to pinpoint what they are passionate about in terms of leadership.”

The podcasts draw thousands of listeners from several countries.

He considers the effort successful because it allowed him to network with businesses and learn more about industry and what is going on in Spokane. In a couple of instances, the podcast led to businesses collaborating with each other.

“Some have exceptionally interesting stories that were fun to hear about. That’s where a lot of the enjoyment is. … You’re talking to leaders of these companies that are all very successful and all very different,” he says.

Krejci likes technology but didn’t know how to produce a podcast in the beginning.

“I actually knew nothing about recording audio, editing, or anything like that that. It was all brand new to me,” he says. “I just kind of jumped in and started learning by mistakes I made as I went.”

This year, he passed the production duties onto a Whitworth University student, and he’s considering turning the content into a book.